The gold-producing districts of New Mexico are distributed in a northeastward-trending mineral belt of variable width that extends diagonally across the State, from Hidalgo County in the southwest corner to Colfax County along the north-central border.

From 1848 through 1965 New Mexico is credited with a gold production of about 2,267,000 ounces; however, several million dollars worth of placer gold was mined prior to 1848.

Mining in New Mexico began long before discoveries were made in any of the other Western States (Lindgren and others, 1910, p. 17-19; Jones, 1904, p. 8-20). The copper disposits at Santa Rita were known and mined late in the 18th century, and placer gold mining began as early as 1828 in the Ortiz Mountains south of Santa Fe.

In 1839 placer deposits were discovered farther south along the foot of the San Pedro Mountains. The earliest lode mining, except the work at Santa Rita, dates back to 1833 when a gold-quartz vein was worked in the Ortiz Mountains.

New Mexico was incorporated as a Territory of the United States at the close of the Mexican War in 1846, but, because of its isolation, the general lack of knowledge of the region, and the hostility of the Apache Indians, it was not until about 1860 that prospectors and miners were attracted to the region.

All mining in the Territory was suspended during the Confederate invasion in 1861-62, and later mining was frequently interrupted by Indian raids (Lindgren and others, 1910, p. 18).

New ore discoveries in the middle and late 1860's and in the 1870's stimulated mining in the Territory. In 1865 placers and, soon afterward, quartz lodes were found in the White Mountains in Lincoln County; in 1866 placer deposits were discovered at Elizabethtown in Colfax County, and silver-lead deposits were discovered in the Magdalena Range in Socorro County. In 1877 placers and gold-quartz veins were found at Hillsboro, and in 1878 phenomenally rich silver ore was found at Lake Valley in Sierra County.

Extension of the Southern Pacific and the Atchison, Topeka and Santa Fe railroads through the southern and central parts of New Mexico frcm 1879 through 1882 was a great stimulus to mining. Rich silver ores were discovered in the 1870's and 1880's, and silver mining nourished until the shallow rich ores were depleted. The drop in the price of silver in 1893 further discouraged silver mining.

At the beginning of the 20th century base-metal mining in New Mexico was resumed, but gold and silver mining was not. In 1912 large-scale copper mining began in the Central district in Grant County and since then most of the State's gold output has come as a byproduct from copper and other base-metal ores (fig. 18). 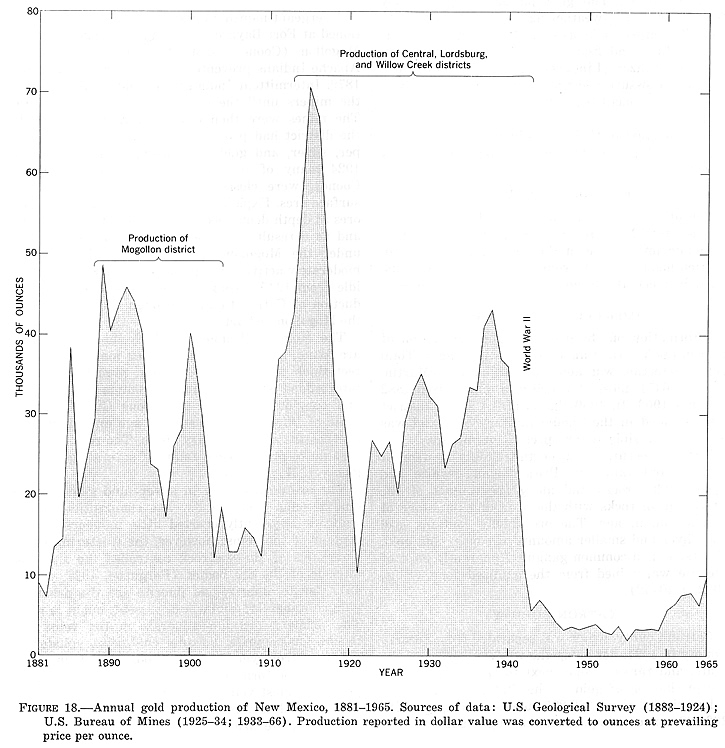 The mineral belt of New Mexico is in mountainous terrain that lies between the Colorado Plateau on the northwest and the Great Plains on the east. It is a zone of crustal disturbance in which the rocks were folded and faulted and intruded by. stocks, dikes, and laccoliths of monzonitic rocks. Deposits of copper, lead, zinc, gold, and silver occur locally throughout this belt. Some deposits of copper and gold are Precambrian in age (Lindgren and others, 1910, p. 47-51), but most of the ore deposits are associated with Upper Cretaceous or Tertiary intrusive rocks.

The gold placers were probably derived from the weathering of these deposits. In later Tertiary time lavas spread out over wide areas of the State, and fissures within these rocks were later mineralized (Lindgren and others, 1910, p. 67-74). These fissure veins are rich in gold and silver, but in most places they are relatively poor in base metals. 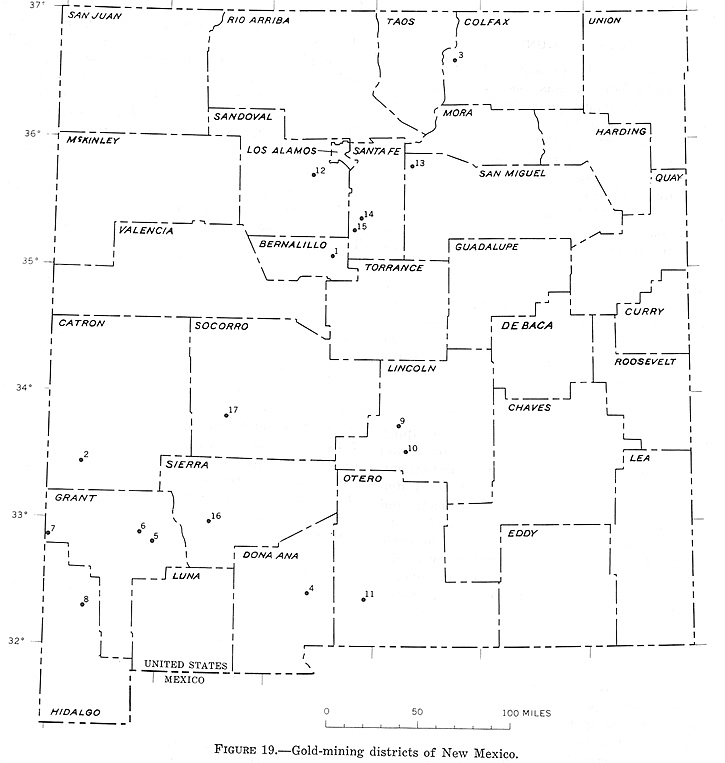