Mine Discovery Tools are available for Placer County. Click here for more info.

Placer County, noted chiefly for its placer mines, has also produced substantial lode gold particularly from the Ophir district. Gold was discovered in 1848 in Auburn Ravine. In the 1850's, bars in the American River and its tributaries were worked, and quartz mining also began.

In the Foresthill Divide area, Tertiary channels were mined by drifts, and in the Dutch Flat-Gold Run, Iowa Hill, and Yankee Jim districts, gold was extracted from gravels by hydraulic methods. The Michigan Bluff placers have also been productive.

The center of lode mining in Placer County is the Ophir district. Gold-quartz mines were active in the Canada Hill district (Logan, 1936, p. 10), but production from this area could not be ascertained. Logan (1936) described the gold deposits of this county and was the chief source of information for the production and description of the districts.

The Dutch Flat-Gold Run district is along the north boundary of Placer County on the system of Tertiary channel deposits that extends south from Nevada County. 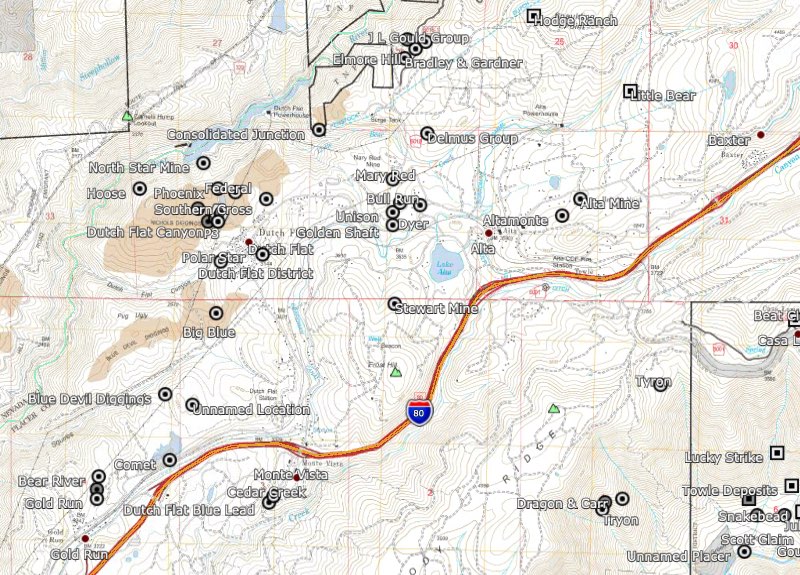 Circle markers locate the gold mines of the Dutch Flat district. Image is from the WMH Mine Discovery Tools for Google Earth Pro

Placer mining began in 1849, and by 1857 hydraulic and drift mines were producing on a fairly large scale. Though early records are almost nonexistent, it was estimated (Logan, 1936, p. 58, 65-70) that the district produced about 479,000 ounces of gold to 1935. In recent years, because of high costs and restrictive legislation, production has decreased to less than 1,000 ounces per year. Total production through 1959 was about 492,000 ounces.

The Foresthill district is in south-central Placer County. Foresthill Divide is a complex system of Tertiary channels capped by lavas. The gravels have been extensively worked by drift mines which reached their peak of productivity in the 1860's (Logan, 1936, p. 49).

No activity has been reported in the area since before 1932, except in 1958 when about 300 ounces was produced.

The Michigan Bluff district is in southern Placer County, about 5 miles east of Foresthill. 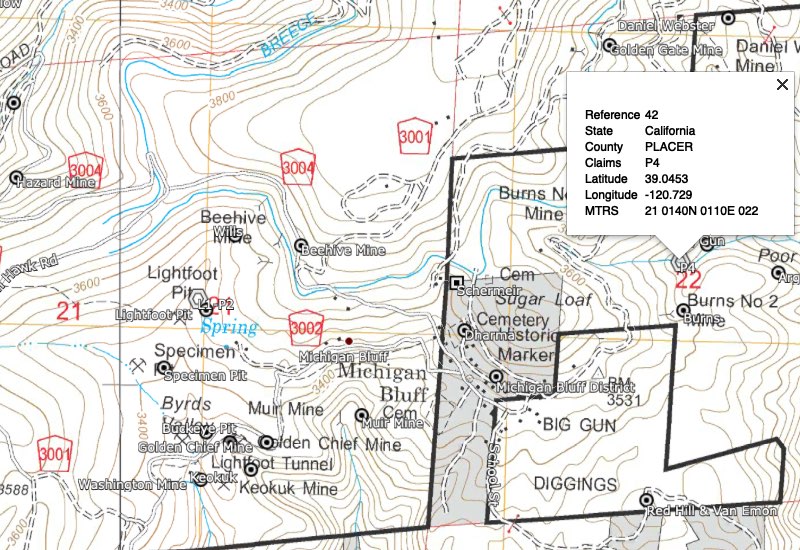 Circle markers locate the gold mines of the Michigan Bluff district. Info window shows details on the 4 active placer mining claims in that particular PLSS section. Image is from the WMH Mine Discovery Tools for Google Earth Pro

From 1853 to 1880 considerable hydraulic and drift mining was done in the Tertiary channel gravels that underlie the eastern part of Foresthill Divide at Michigan Bluff. According to Logan (1936, p. 53-70), an area of 40 acres yielded $5 million in gold.

The Big Gun mine with an output of about $1 million to 1882 was the largest individual producer of the hydraulic mines, and the Hidden Treasure mine was the most productive of all the drift mines in the Tertiary gravels in the State, with a total of about $4 million in gold. Several lode mines were important gold producers, the Pioneer, with $900,000 in gold, and the Rawhide, with $300,000, were the most productive.

The total gold production of the district through 1959 was about 300,000 ounces. In recent years activity has slackened, and during 1942-59 less than 100 ounces per year was reported.

No details on geology or history could be found.

The Ophir district, near Auburn, is the most productive lode-gold district of Placer County; it also has produced significant amounts of placer gold. The first reported production from the quartz mines was in 1867, when the Green Emigrant mine yielded $100,000 (Logan, 1936, p. 28).

In the 1870's many mines were developed, and although not all prospered, the district continued to be moderately active until 1921. From about 1936 to 1942 the mines were very productive, but during 1942-59 less than 100 ounces per year was produced.

Placers along the American River in the Ophir district were worked as early as 1850, but these shallow gravels were exhausted by 1880 (Logan, 1936, p. 49). The production for these years is unknown. In the late 1930's, dredges started working the gravels near Loomis and in a few years recovered more than 73,000 ounces of gold.

The geology of the district was briefly described by Logan (1936, p. 8-9). Granite, which is the eastern part of a batholith, is intruded into am-phibolite schist. The ore deposits are near the contact and are found in both the granite and in the schists. The gold occurs in lenticular quartz veins and is associated with small amounts of pyrite, galena, sphalerite, and copper sulfides.

The Rising Sun mine, 11/2 miles west of Colfax, with an estimated total production of $2 million in gold (Logan, 1936, p. 34), is the leading lode-gold producer in Placer County.

Opened in 1866, the mine produced continuously until 1884. Thereafter it was in operation for several brief periods, the most recent on record was in 1932. The Rising Sun deposit is in a zone of altered diabase, serpentine, and slate of the Mariposa Formation of Jurassic age, near a large stock of gabbro. The main vein averaged 18 inches in width and contained rich pockets of free gold in quartz (Logan, 1936, p. 34).