Mine Discovery Tools are available for Plumas County. Click here for more info.

Placer deposits in the Tertiary gravels in Plumas County were worked on a large scale by hydraulic methods in the early years. The peak production was during 1855-71, when at least $60 million (about 2,912,000 ounces) in gold was shipped from the La Porte district alone (Lindgren, 1911, p. 103). Lode mines also were developed at an early date, especially in the Johnsville district where some mines were active as early as 1851.

The geology of Plumas County was described by Averill (1937, p. 82-88). In brief, the rocks consist of a series of sedimentary, metasedimentary, and metavolcanic formations that have been folded, faulted, and intruded by granodiorite of Late Jurassic and mid-Cretaceous age. Most of the western two-thirds of the county is underlain by northwest-trending bands of these folded rocks; the granodiorite occupies the eastern part.

The oldest rock in the county is metarhyolite which is overlain by quartzite and shale of the Grizzly Formation of Silurian age. The remainder of the stratified rocks, in ascending order, are the Montgomery Limestone of Silurian age, the Tay-lorsville Formation of Devonian age, the Calaveras Formation of Carboniferous age, the Hosselkus Limestone and Swearinger Slate of Triassic age, and seven other sedimentary formations of Early and Middle Jurassic age. Patches of Tertiary gravels mark the northward-trending course of the ancient Jura River and the northeasterly course of the Tertiary Yuba River.

Igneous rocks, in addition to those already mentioned, consist of basic flows and dikes of Carboniferous age, peridotite and pyroxenite bodies of Jurassic age, and greenstones, amphibolites, and metadiorites of Jurassic age. The northwest and large areas of the southeast and southwest parts of the county are covered by rhyolite, dacite, andesite, and basalt lava flows of Tertiary and Quaternary age.

The bedrock in the southwest part of the district consists of a northwest-trending band of metasedimentary rocks of the Calaveras Formation. This is bordered on the northeast by a parallel band of pre-Devonian metavolcanic rocks. A few small bodies of granodiorite, of Jurassic age, cut the older rocks. The ore deposits are in veins in the metavolcanic rocks near the granodiorite and in the granodiorite itself. The veins consist of quartz with free gold and small amounts of sulfides.

The Johnsville, in the east half of T. 22 N., R. 11 E., in south-central Plumas County, is primarily a lode district, but it has produced some placer gold from Tertiary and possibly also from Quaternary gravels. 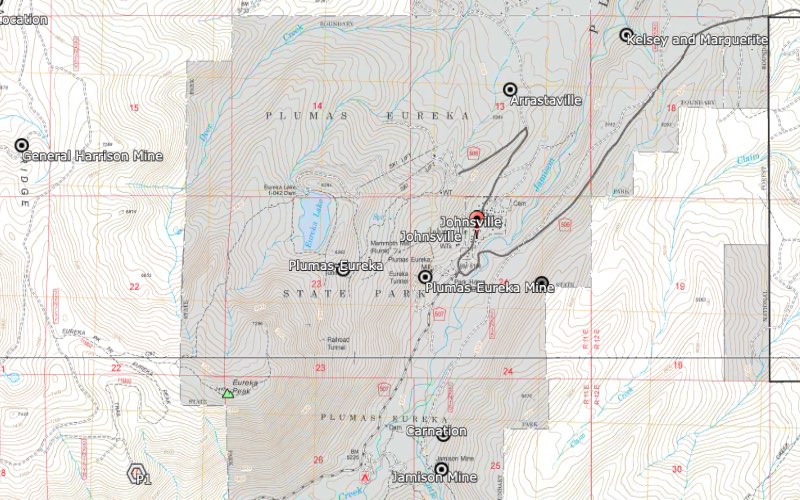 Circle markers locate the gold mines of the Johnsville district. Image is from the WMH Mine Discovery Tools for Google Earth Pro

The channel near La Porte is about 500 feet wide. Gold was concentrated on the amphibolite bedrock or in the lowermost 2 feet of the gravel. The main channel has been traced a distance of 10 miles to the northeast, and it ranges from 500 to 1,500 feet in width and from 14 to 129 feet in depth. The channel is offset near La Porte by numerous faults which have an aggregate displacement of about 500 feet (Lindgren, 1911, p. 105-108).