Location and History
Weaverville, the seat of government of Trinity County, is about 50 miles west-northwest of Redding. For years it was one of the major centers of gold mining in the Klamath Mountains. The area was settled son after Major Pearson B. Reading's gold discovery on the Trinity River in 1848. The stream and bench gravels were highly productive during the gold rush. The town was named for John Weaver, a prosperous Forty-Niner. By the middle 1850s many persons lived here, including several thousand Chinese, some of whom became involved in a tong war in 1854. The old Chinese joss house still stands and is now a state historical monument.

The La Grange mine, a few miles west of town and one of the major hydraulic mines in California, was opened in 1851. Large-scale hydraulicking began in 1862 and continued until 1918. From 1932 until 1942, further excavation at the mine, for the state highway, brought some gold production. The total output of the mine has been estimated by the author to be at least $8 million, although the commemorative plaque states that it is $3.5 million. More than 100 million cubic yards of material were excavated. Water was delivered from Stuart's Fork of the Trinity River via a 29-mile system of canals, flumes, and tunnels. During the 1930s several other hydraulic mines and a considerable number of dragline dredges were active in the district. 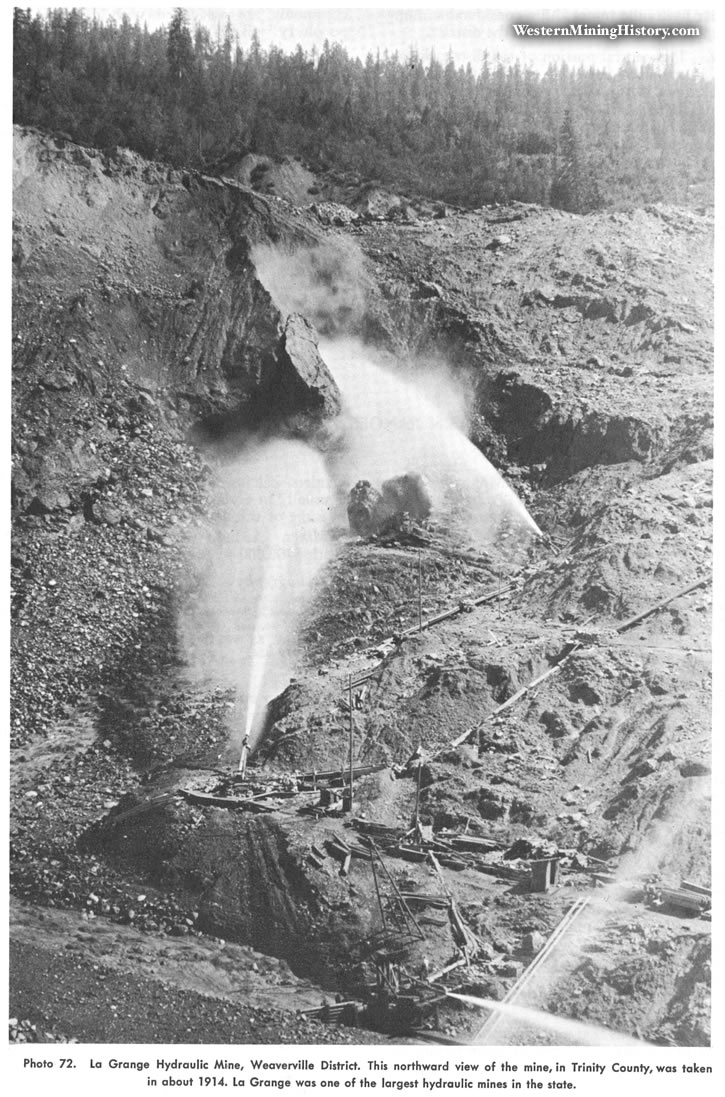 Geology
The central portion of the district is underlain by an extensive series of continental sedimentary rocks known as the Weaverville Formation. This formation includes the auriferous channel gravels, as well as shale, sandstone, and tuff. In places the gravels are partly cemented and as much as 400 feet thick. The Weaverville Formation is underlain by schist, limestone, slate, and shale and to the east by granite of the Shasta Bally batholith. The gravel deposits at the La Grange mine lie in a trough bounded by a fault. Schist lies on the northwest and slate and limestone on the southeast. The base of the fault plane is a soft gouge. The richest zone in this mine was a 15-foot layer of blue gravel that yielded up to $2 in gold per yard. Some gold-quartz veins in the district contain free gold and varying amounts of sulfides. The are bodies commonly are associated with diorite or "birdseye porphyry" dikes.