Colorado ranks second among the States in total gold production, with an aggregate of about 40,776,000 ounces through 1965.

Gold and other ore deposits are mostly in a northeast-trending belt, known as the Colorado mineral belt, in the mountainous western part of the State. From near Boulder on the northeast this belt extends southwest to the San Juan Mountains and beyond (fig. 10). The Cripple Creek district, the largest gold producer in Colorado, and several minor districts lie southeast of the mineral belt. 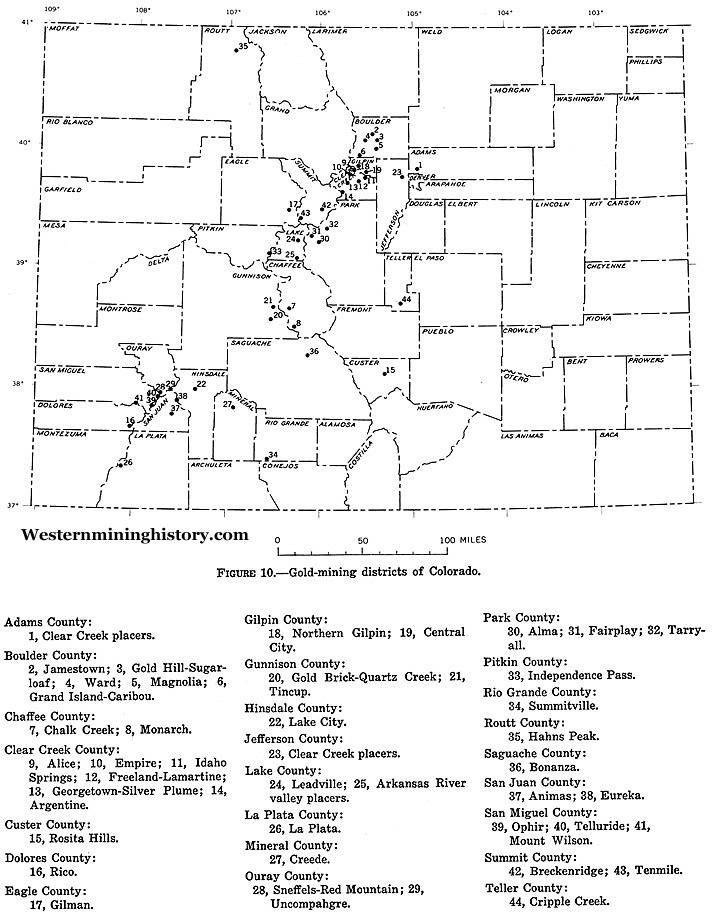 Before 1858 Colorado was explored by fur trappers and special expeditions, but apparently most of these early adventurers paid little or no attention to the mineral deposits in the area. According to C. W. Henderson (in Finch and others, 1933, p. 761), the existence of gold in South Park was recorded in a report delivered in secret to General Zebulon Pike in 1807 at Santa Fe, N. Mex., where he was being held prisoner by the Spaniards.

Cherokee Indians of Oklahoma reportedly brought gold from the headwaters of the South Platte River to residents along the lower Missouri River from 1849 to 1857.

In the spring of 1858, the Russell brothers, placer miners from Georgia and later from California, led a party who prospected along Cherry and Ralston Creeks and the South Platte River near the present site of Denver. They were guided to the area by Cherokee Indians. Although they only found gold in very small quantities, news of the discoveries spread and a rush to the "Pikes Peak Country" followed.

By Christmas of 1858 about 1,000 men had arrived, and several settlements were founded in the Denver area. In January 1859 the first commercial gold placers in Colorado were discovered by George A. Jackson near the mouth of Chicago Creek near Idaho Springs. This news spread and precipitated a rush of prospectors into the surrounding mountains.

In May 1859, John Hamilton Gregory found outcrops of veins with residual deposits of gold in the drainage basin of North Clear Creek near Black Hawk, and in early June, W. G. Russell discovered placer gold in Russell Gulch near Central City.

Throughout 1859 prospectors spread to many of the streams emerging from the Front-Range, to the headwaters of the South Platte River and its tributaries in South Park, and up the Arkansas River and its tributaries as far as California Gulch to what was to become the Leadville district (Henderson, 1926, p. 1-9; Finch and others, 1933, p. 761-768; Bastin and Hill, 1917, p. 67-69). This activity led to many rich and significant discoveries in the following few years.

In the first few years frenzied activity reigned in the newly discovered gold fields. During 1858-67 Colorado produced about $14,924,000 in placer gold and about $10 million in lode gold (Henderson, 1926, p. 69). When mining had depleted the rich placers and the free-milling oxidized ores and reached the underlying sulfide ore, which was not amenable to amalgamation or simple devices of concentration, many mines closed and mining waned (Bastin and Hill, 1917, p. 153-163).

This condition was in part remedied in 1868 when the Hill smelter opened in January at Blackhawk in Gilpin County. It successfully treated sulfide ores from many districts, and the lode-mining industry in Colorado was revived (Henderson, 1926, p. 69).

Prospectors soon spread to all parts of the State and discovered in rapid succession many of Colorado's most famous mining camps. Discovery of gold in the San Juan Mountains in southwestern Colorado in 1870 triggered a stampede of prospectors into this region - to Summitville in 1873 and Silverton in 1874. In 1875 major ore discoveries were made at Lake City, Ouray, and Telluride. 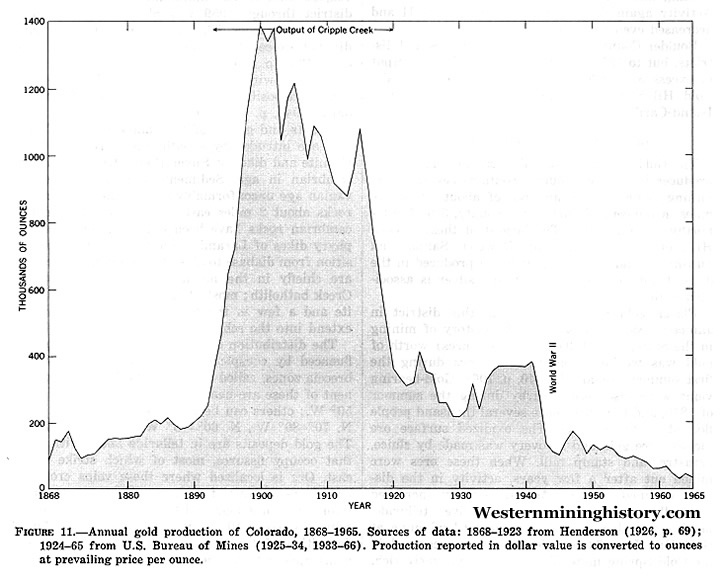 The mineral belt of Colorado trends obliquely to the mountain ranges and crosses the San Juan Mountains in the southwestern part of the State and the Sawatch, Mosquito, Gore-Tenmile, and Front Ranges in the central and north-central parts of the State. This belt is coincident with a belt of intrusive stocks, dikes, and sills of porphyritic acidic igneous rocks of Late Cretaceous or Tertiary age. Gold, silver, and lead-zinc ore deposits occur throughout this belt, in rocks of various types and ages.

In the San Juan Mountains the deposits are chiefly in volcanic rocks of Tertiary age; in the Sawatch, Mosquito, and Gore-Tenmile Ranges they are in sedimentary rocks of Paleozoic age; and in the Front Range they are in the metamorphic and igneous rocks of Precambrian and Tertiary age. In Colorado, 44 districts - scattered in 24 counties - each have produced more than 10,000 ounces of gold.