This article was originally posted in the forums on May 16, 2008 by D E Russell

The substitution of a mechanical power in place of the hand-labor formerly exclusively used for drilling rock, has been a subject of much thought, and many attempts have been made, with greater or less success, until the rock drill by improved machinery became of late years a firmly established institution, and the credit of this belongs, to a great extent, to the improvements made by Mr. Ingersoll, as he overcame the defects connected with former attempts, which were excessive weight, imperfect action, easy derangement, frequent damage, and costly repair. The way in which these serious drawbacks were surmounted was to make the drill of only few moving parts, connected in a compact manner, so as to insure portability, strength, reliability, and economy, as well in first cost as in the working and maintenance.

The wear has been reduced to a minimum by cushioning the pistons with air or steam, so as to relieve the shock at the moment when the drill comes in contact with the rock, while no part of the machine is exposed to any other shock, thereby totally avoiding the constant and continued repair heretofore connected with other drilling machines working by percussion.

The capacity of this drill is to bore boles of 1 to 4 inches in diameter, to any depth ordinarily required for rock excavations, with a velocity which in the hardest rock found on this continent, is equivalent to 30 to 60 feet per day of 10 working hours. They have bored steadily 80 feet a day in granite, the holes averaging 8 feet in depth and 3 inches in diameter. In trap they averaged 23 feet a day for several months, the holes being 4 inches in diameter and 18 to 20 feet deep. Even 128 feet of a 3-inch hole has been drilled in every 10 hours.

It is confessed that this has been nearly equalled by other machines, but this equality did not last long, as the Ingersoll drill could be kept working constantly by the week, month, and oven the year, without requiring stoppage for repair, by which it outstripped others, which had to be stopped from time to time for repair, which often was expensive, while the occasional repairs of the Ingersoll drilling machine are comparatively trifling and inexpensive. 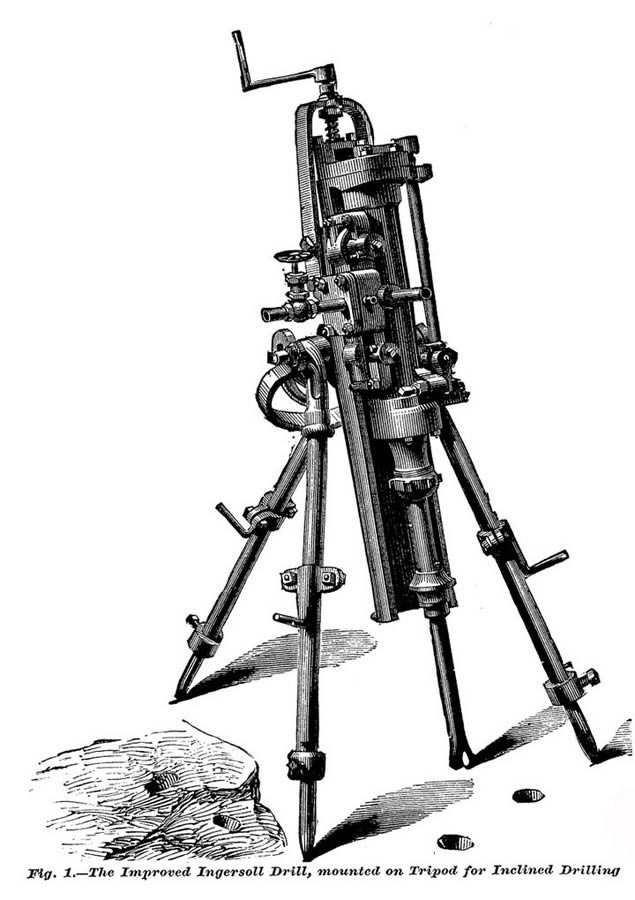 We illustrate here in Fig. 1 the tripod Ingersoll drilling machine in its present improved shape, with telescoped legs, which can be lengthened and shortened. In this form it is very familiar to New York readers, being seen in the upper parts of the city, and in some of its suburbs, energetically at work day after day in assisting the labor required in making excavations for foundations, tunnels, cuttings, etc. It is seen from the figure that the machine consists of a double-acting cylinder and piston, the piston-rod carrying the drill tool itself, which, as is usual in all machines of this kind, has an X cutting face. The cylinder is cushioned at each end just beyond the regular piston stroke, which effects a saving of air or steam, and prevents shocks very effectively so that when the drill is at work the motion of the machine is very slight, even when delivering its hardest blows. The feeding of the drill, that most important part of the machine, is accomplished in the most excellent way. The forward movement of the tool is governed by the motion of the piston, which never acts upon the feed until the rock is sufficiently penetrated. The feed is strictly automatic, and the progress is at the rate which the hardness of the rock and the pressure of steam will permit, while the drill manages its own feed and the rock controls its own hardness, only the steam pressure remains within the control of the operator. Thus the management of the drill is reduced to the simple act of turning on more or less steam, and this, with the simplicity in the general design, makes it very easy to teach any man at all accustomed to machines to work it. No cut-off is used, but the full force of the steam is used through the whole stroke, as the makers have found by experience that much greater effectiveness is attained in this way. This arrangement permits the machine to work within very wide limits of force, so that can be closely adapted to the special conditions - as to hardness of rock, desired rapidity of penetration, etc. 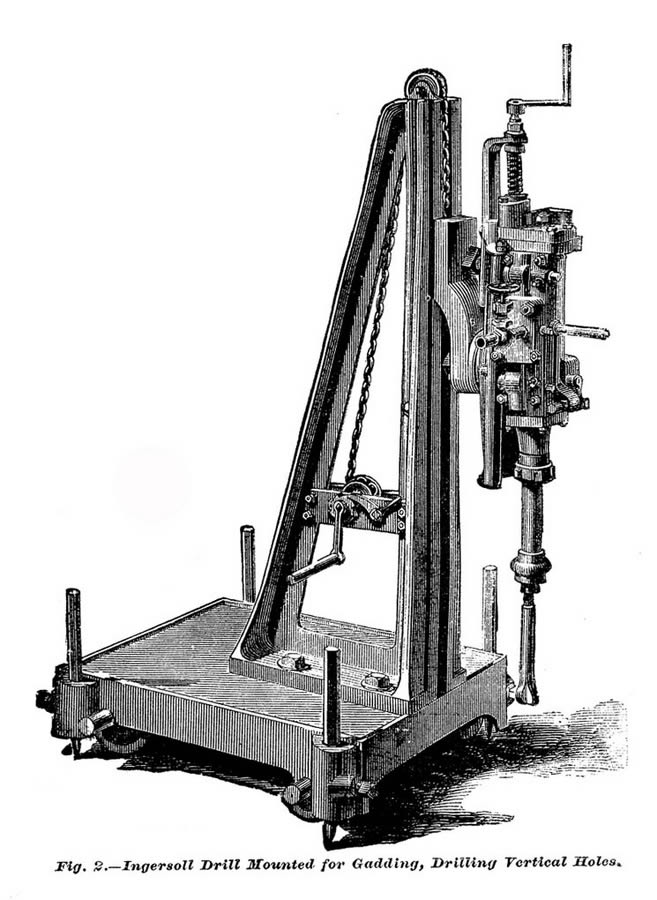 Fig. 2 represents the mode of mounting employed for so-called Gadding. A small iron derrick is mounted on a car, which is provided with wheels for easy movement, and also with adjustable standards to rest upon while at work. The drill hangs on a frame which is moved up and down by a chain and wheel, as shown. In this position it is ready to make vertical holes; while in Fig. 3 the drill is represented ready to make horizontal holes. This is simply accomplished by placing cylinder piston and drill horizontal, and lowering it by means of the chain to the height required where the hole is to be drilled; or the position may be made oblique, so that by this arrangement either vertical, horizontal, or inclined holes may be drilled with the same speed.