Oregon had been rather heavily traversed by settlers on their way to the more populous coastal communities long before gold was discovered in the State. Fear of hostile Indians no doubt discouraged many from prospecting the promising-looking mountain ranges and stream channels at any distance from the main immigration routes. It was not until 1852 that gold placers were worked at Rich Gulch in Jackson County and Josephine Creek in Josephine County (Raymond, 1870, p. 214, 217).

The more widely publicized discoveries of placer gold at Griffin Gulch in Baker County in 1861 (Wagner, 1959, p. 21) and at John Day and Canyon Creek in Grant County slightly later (Rand, 1959, p. 44) triggered an avalanche of prospectors and miners of sufficient magnitude to eventually establish the gold mining industry in the State (fig. 21). Other early placer operations were in the Willow Creek country in Malheur County, where several districts were organized (Browne, 1868, p. 591).

After the initial period of high production during which the richer placers were exhausted, discoveries of auriferous quartz veins helped stabilize the mining economy. Lode mining began as early as 1859 on the Gold Hill vein in Jackson County (Raymond, 1870, p. 214-232) ; gold-bearing quartz veins were also worked in the 1860's in the Canyon Creek district, the Eagle Creek district, the Mormon Basin district, and the Baker district.

The first boom in Oregon expired about 1870, but it had been strong enough to attract people with diversified talents so that other industries such as farming and cattle raising cushioned the shock. In addition, the gold rush was responsible for the early entry of railroads into the State, and this hastened the growth of cities and provided a more stable economy.

Although mining of gold in Oregon was at an alltime low in 1965 (fig. 22), mining of nickel, uranium, mercury, and a host of nonmetals was flourishing as one of the important industries in the State. 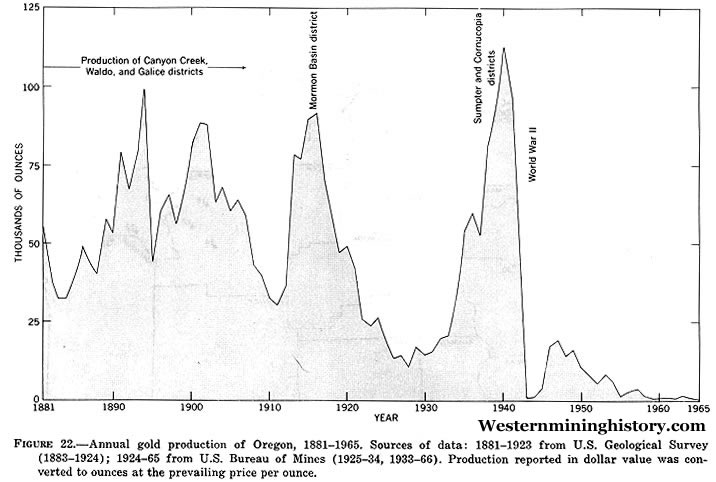