Arizona, from 1860 through 1965, produced a total of about 13,321,000 ounces of gold and in 1965 ranked eighth among the gold-producing States. As in the other Western States, the first discoveries of gold were placer deposits.

Shortly afterward lode deposits were discovered in most districts, and they furnished the bulk of the early gold output of the State. From 1900 through 1965, however, most of Arizona's annual gold production came as a byproduct from the large-scale mining of porphyry copper ores (fig. 6). 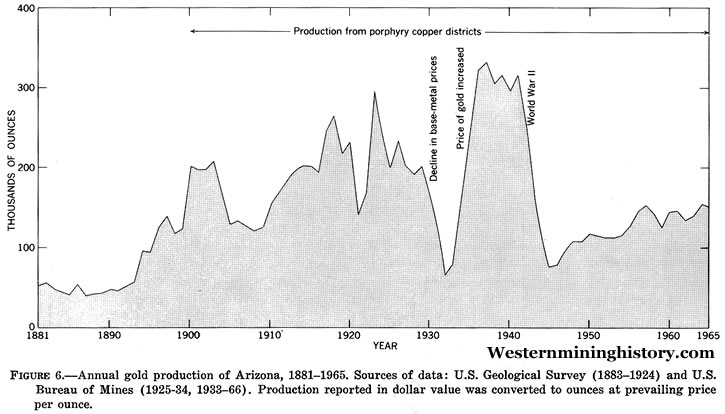 Deposits of silver and copper in Arizona were known to the Indians and Spaniards long before the Territory was acquired by the United States (S. R. E. Heineman, in Arizona Bureau of Mines, 1938, p. 26-27). Because of the inaccessibility of the area, lack of water, and Indian raids, only a small amount of prospecting was done by Americans in the 1850's, mostly near the old Mexican settlements of Tucson and Tubac, and in the Dome (Gila City) district where rich placers were discovered in 1858 (Wilson, 1952, p. 18).

Little or no lode gold was mined in these early years. During the Civil War, prospectors among the California troops in Arizona organized parties to hunt for gold. In 1862 rich placer deposits were found near the Colorado River at La Paz in western Yuma County, and from 1862 to 1870 other placer deposits were found in Yavapai County. Included among these were the Weaver-Rich Hill, Lynx Creek-Walker, Hassayampa-Groom Creek, Big Bug, and several smaller deposits in the Bradshaw Mountains (Wilson, 1952, p. 15, 38).

In 1863 also many gold lodes were discovered in the Bradshaw Mountains in Yavapai County and in the Oatman district in Mohave County. With the end of the Civil War, troops were withdrawn from the territory, and warfare between the white settlers and the Indians prevented much mining until 1872, when a truce was declared (Tenney, 1934, p. 16).

High prices for silver and copper in the 1870's and the completion of two transcontinental railroads - the Southern Pacific and the Atchison, Topeka and Santa Fe - across Arizona in 1881 stimulated exploration which resulted in the discovery of many major deposits. In the general depression of 1884-93 and after the demonitization of silver in 1893, copper and silver mining declined but gold mining increased.

By the early 1900's commodity prices again became favorable, and several companies were organized to mine the large low-grade porphyry copper deposits that have been the principal source of gold in Arizona (Tenney, 1934, p. 17). 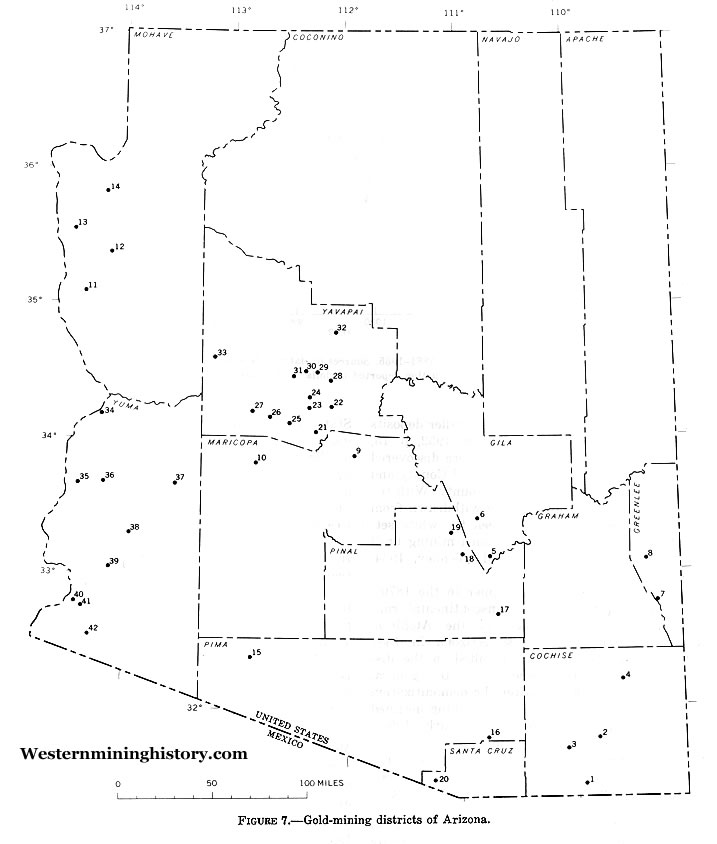 In Arizona 42 districts in 10 counties produced in excess of 10,000 ounces of gold (fig. 7) ; many additional districts are credited with smaller amounts. According to Wilson, Cunningham, and Butler (1934, p. 13), nearly 80 percent of the State's lode gold production and much of the placer gold has come from deposits that occur in a northeast-trending belt called the mountain region by Ransome (1903, p. 15-16), which is about 65 miles wide and borders the southwest margin of the Colorado Plateau.

Within this belt the deformed Precambrian rocks have been tilted, intensely faulted, and intruded by masses of igneous rocks. In the desert region, southwest of the mountain region, the deposits are widely scattered.

The gold deposits of Arizona are of several types. In the San Francisco and Kofa districts gold deposits occur in epithermal quartz-calcite veins of Tertiary age. The Weaver, Vulture, Harquahala, Gila City, Wallapai, and Dos Cabezas districts are representatives of mesothermal vein systems of Mesozoic or Tertiary age with sulfide-quartz veins rich in silver and gold.

In the porphyry copper deposits - in the districts of Ajo, Bisbee, Clifton-Morenci, Globe-Miami, Ray, San Manuel, and Superior - the ore bodies are of late Mesozoic or Tertiary age and are in intrusive bodies of quartz monzonite and the adjacent country rocks.

The porphyry copper deposit at Jerome is of Precambrian age. Replacement deposits, rich in gold, silver, and base metals, occur near granitic intrusives in the Tombstone, Big Bug, Turquoise, Banner, and Agua Fria districts.