History
Jacksonville, named for Colonel Alden Jackson-as was the town of Jackson in Amador County-was founded as a supply center in 1848. The placer deposits here were extremely rich, credited with a production of $9 million. Lode mining began in the district in the late 1850s. The Eagle-Shawmut mine was operated on a large scale from 1897 until 1942. The district was served for some years by the Hetch-Hetchy Railroad.

Geology and Ore Deposits
The deposits occur near or at the contact between serpentine on the west and slate and schist on the east interlayered with a number of narrow bands of greenstone. The are deposits consist chiefly of large but low-grade bodies of pyrite ankerite-quartz and mariposite-ankerite-quartz rock and numerous pyrite-quartz stringers. Most of the gold values are in the sulfides; there is not much free gold. The are zones were as much as 180 feet in thickness. There are several adjacent but relatively barren massive bull quartz veins. Mining extended to depths of 3000 feet. The are usually contained 1/7, ounce or less gold per ton; for years the mill heads at the Eagle-Shawmut mine averaged about $2.75 per ton. 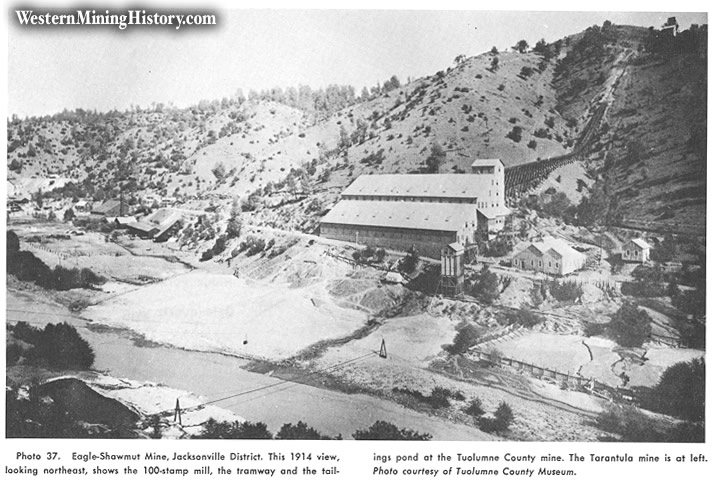