Location
The Nevada City district is in western Nevada County. The district covers an extensive area, from the vicinity of Indian Flat east through Nevada City, northeast to Willow Valley and southeast through Canada Hill and Banner Hill to the vicinity of the Lava Cap mine. It is both a lode- and placer-mining district and once was an important center of gold mining in California.

History
Gold was first mined in this district in Deer Creek, which, in 1849, was called Deer Creek Diggings. The name Nevada was adopted in May 1850 at a public meeting. The placers were rich, and the town grew fast. Hydraulic mining was first practiced in California at American Hill here in 1852, by E. G. Matteson (hydraulicking was also done that same year at Yankee Jims in Placer County). Hydraulic mining flourished until around 1880. Drift mining began in the 1850s, and the drift mines were continuously active until around 1900. Gold-quartz was discovered in 1850, when the Gold Tunnel vein was found. However, important production of lode gold did not commence until the early 1860s because of difficulties in milling the ore. By 1865, the output from lode-gold mining was averaging $500,000 per year and later ranged from $300,000 to $600,000. The Champion and Providence mines were the major producers during these years. Later these two mines were in litigation, and in 1902 the Champion owners bought the Providence. Large-scale lode-gold mining was resumed in the district again during the 1930s when the Lava Cap and Banner mines were operating. From 1933 to 1942, the Lava Cap yielded $12 million. There has been only minor activity since 1942. The old town of Nevada City, the county seat, is now a popular tourist center with numerous well-preserved old buildings. The Nevada County Narrow Gauge railroad served the area from 1877 to 1942. The total output of the district is unknown, but it is estimated by the author at more than $50 million and may have exceeded $70 million.

Geology
The central portion of the district is underlain by granitic rocks, chiefly granodiorite (fig. 19). Adjacent are beds of slate, mica schist, and quartzite, most of which are part of the Calaveras Formation (Carboniferous to Permian). To the west and southwest are fairly extensive beds of massive greenstone, amphibolite, and serpentine. There are a number of fine- to medium-grained dioritic and aplitic dikes, some of which are associated with the gold-quartz veins. In places these rocks are overlain by Tertiary channel gravels capped by rhyolite and andesite.

Ore Deposits
Several major gold-quartz vein systems traverse the district. In the west portion one system extends northwest along a granodiorite-metasedimentary rock contact. In the southern and eastern portion of the district the veins strike nearly west and dip either north or south. There are also a few northeast-striking and southeast-dipping veins. The veins usually are one to four feet thick, but in places a few are as much as 15 feet thick. The ore contains varying amounts of free gold, often abundant pyrite and smaller amounts of other sulfides. Some of the ore bodies are extensive; the ore body at the Providence mine persisted to an inclined depth of more than 2700 feet. Considerable high-grade ore has been recovered in the district.

Several important Tertiary channels were sources of ore-bearing gravels. One, the Harmony channel, which enters the district from the northeast, was extensively mined by drifting. The pay gravel in this channel was 150 to 200 feet wide, two to four feet deep, quartzitic, often sub-angular and well-cemented. These pay streaks yielded $1.55 to $2.50 in gold to the ton, at the old price. The Manzanita channel, which yielded $3 million, is just to the west. Northwest of town is the northwest-trending Cement Hill channel. In the southern part of the district is the Town Talk channel, which was narrow but rich in places. Much of the placer gold taken from the channel deposits in this district was coarse. 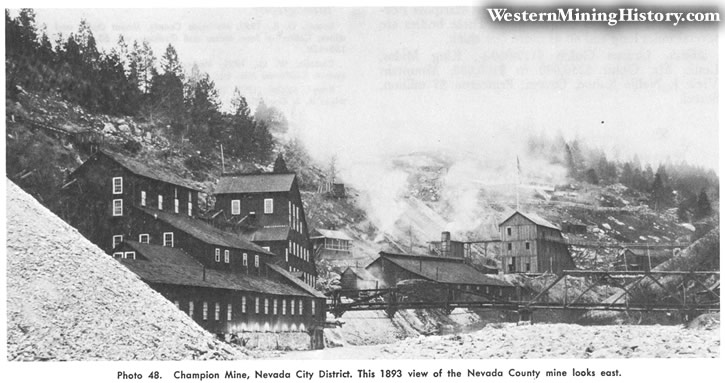 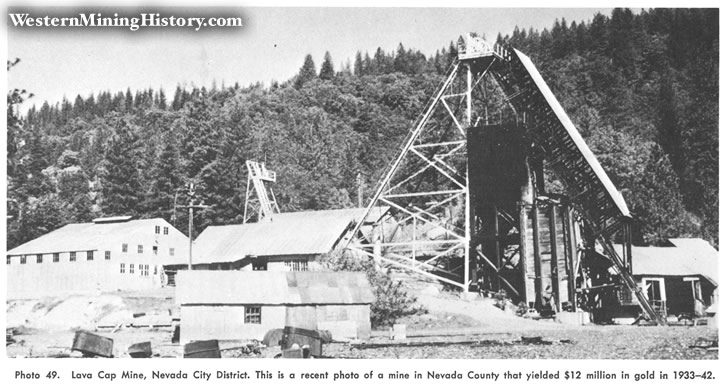 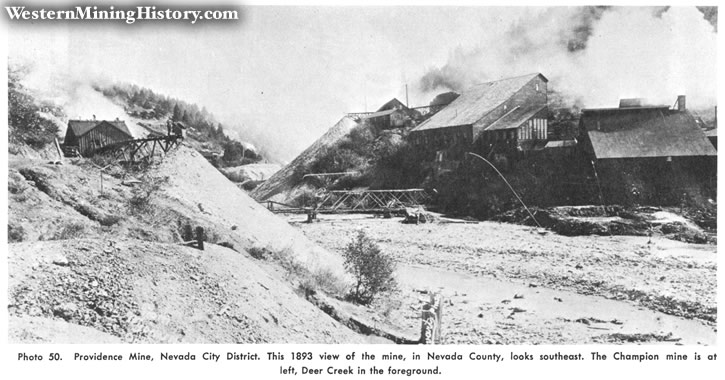 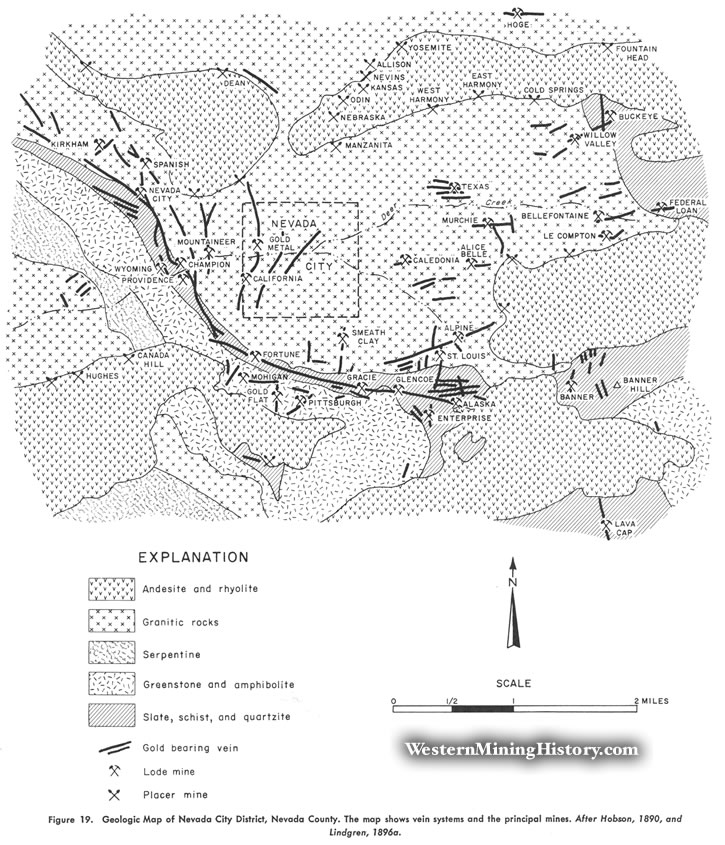