Location
This district is in southwestern Butte County. It is mainly a dredging field that extends from just west of the city of Oroville southwest along the Feather River to a point about five miles due east of Biggs. The field is one to two miles wide and nine miles long.

History
Shallow placers were mined here during the gold rush. The area was settled in 1849: Oroville originally was known as Ophir City, but the name was changed in 1855. Around 1895, W. P. Hammon and others tested the area to determine the feasibility of mining on a large scale. They introduced bucket-line dredging in 1898, the first in California. The field was highly productive from 1903 to 1916; in 1908 there were 35 dredges and 12 dredging companies active in the field. Output later declined, but dredging was done again from 1936 to 1942 and 1945 to 1952. The dredge field is now an important source of sand and gravel. The total output from dredging is estimated to be about 1,964,000 ounces of gold.

Geology
The gold occurs in river gravels and adjacent terrace gravels on the flood plain. The gravels rest on a bedrock of soft but compact andesite and rhyolite tuff. Coarse bonlders, which become finer downstream, are present along with alternating sand layers. Digging depths ranged from 25 feet upstream to as much as 55 feet downstream. The gold was fine and occurred chiefly in the gravels. It was 915 to 930 in fineness. Dredge recoveries ranged from 15 cents to 25 cents per yard of gold at the new price. Minor amounts of platinum also were recovered. 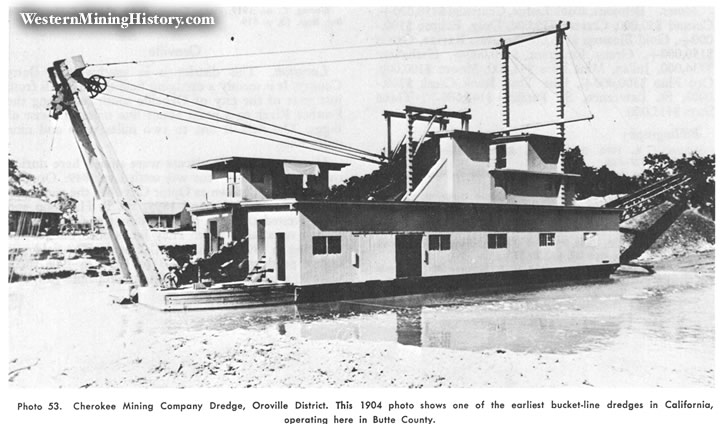