Location
The Sheep Ranch district is in south-central Calaveras County about 16 miles east of San Andreas and eight miles north of Murphys. It includes the old Washington district just to the south and the El Dorado area to the west.

History
The streams in the area were first mined during the gold rush. Drift mining of the Tertiary channel gravels began in the late 1850s and continued intermittently through the early 1900s. The Sheep Ranch mine, the largest source of gold in the district and the largest mine of the Sierra Nevada east gold belt, was first worked in 1868. Senator George Hearst had an interest in this mine from 1877 to 1895. It was operated on a major scale until around 1907 and again from 1936 to 1942. The Right Bower mine has been intermittently worked since 1946.

Geology
The principal rocks underlying the area are slate, impure quartzite and graphite schist of the Calaveras Formation (Carboniferous to Permian), which have been intruded by gabbroic stocks. The gravel deposits are quartz-rich and occur as patches. They are part of the Tertiary Fort Mountain channel, which extends south from the Railroad Flat district. In places the gravels are overlain by rhyolite.

Ore Deposits
The quartz veins usually are a few feet thick and range from white to dark smoky gray in color. Smoky vein quartz is characteristic of some of the mines in this district. The ore contains free gold, which often is coarse, and varying amounts of sulfides. Appreciable quantities of high-grade ore have been recovered. The Sheep Ranch vein has been mined to a deprh of about 3000 feet. The gravels usually are fairly well-cemented and were rich in places. 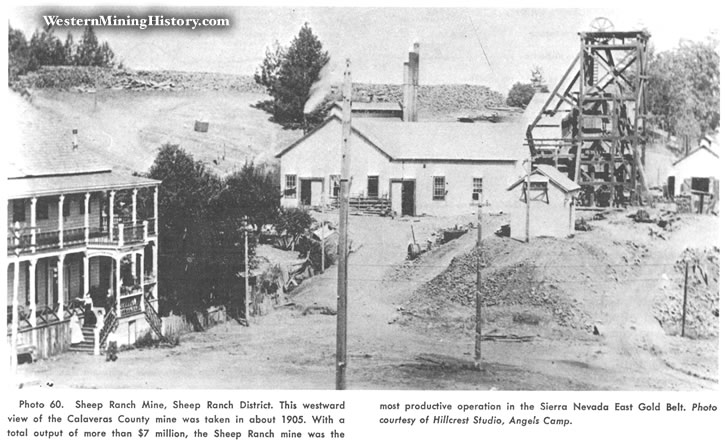