In Nevada, gold production has been greatly exceeded by silver production; most of the gold produced has been a byproduct of silver or base-metal ores. The major gold districts are Goldfield, Silver Peak, Aurora, Rawhide, Jarbidge, National, Round Mountain, Manhattan, Delamar, Wilson, Potosi, and Lynn, although the largest gold production has come from the Comstock Lode district, principally a silver district (fig. 16). 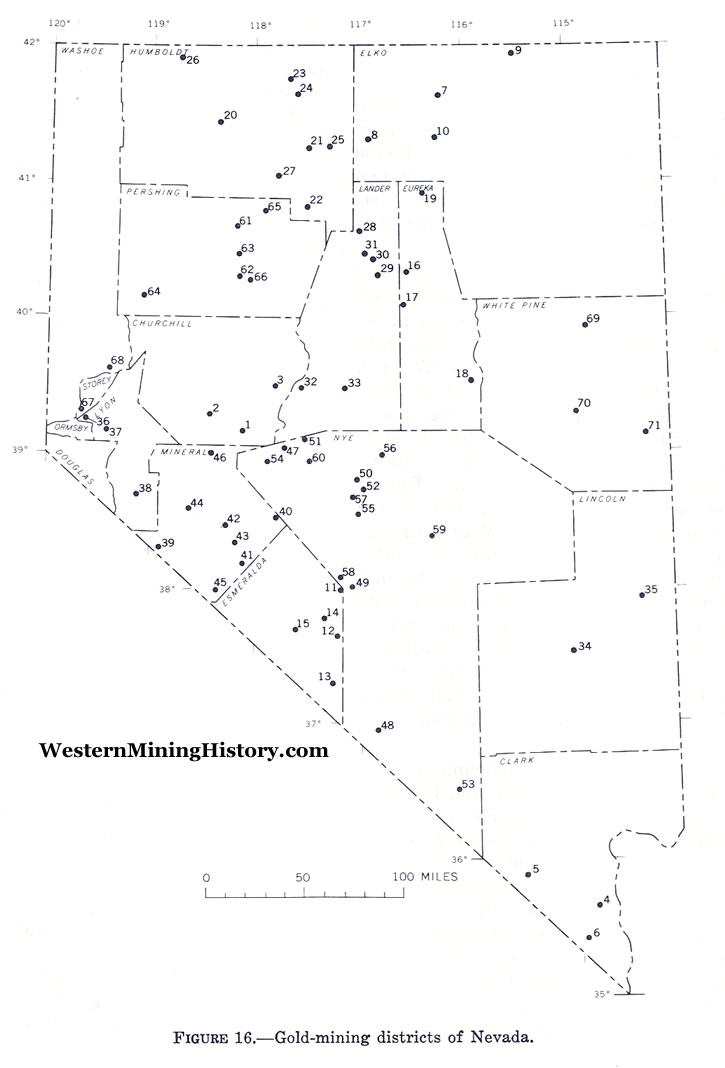 Mining began in the State in the early 1850's, and 1859-79 was the boom era of the Comstock Lode and the Reese River districts. Mining, except in the Comstock Lode, declined steadily after 1880 until the discoveries of the silver ore deposits of Tonopah in 1900 and the bonanza gold deposits of Goldfield in 1902. These finds stimulated prospecting in new areas and rejuvenated mining activity in the State (fig. 17). 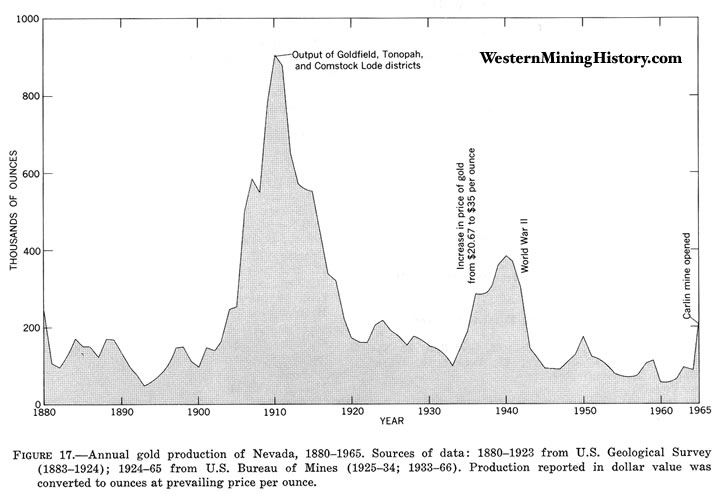 The old silver, lead, and copper-mining camps of Pioche, Yellow Pine, Ely, and Eureka were reopened as new techniques made mining and milling more economic. From World War I through 1965, lead, zinc, and copper production dominated mining activity in Nevada, but precious-metal output regained part of its former prominence with the inception in 1938 of the large-scale opencut mining operation at the Getchell mine in the Potosi district and the opening of the Carlin mine in the Lynn district in 1965.

Ferguson (1944, p. 78-80) has summarized the major features of the geology of Nevada. Paleozoic sedimentary rocks occur throughout the State. Mesozoic sedimentary rocks are exposed in the western part and in the west-central part as far east as Nye County. Along the west border of the State lies the huge Sierra Nevada batholith, and just east of it and related to it are numerous smaller bodies of granitic rock.

Along the east, and extending southwestward through Clark County, is a belt characterized by folding and large-scale thrusting and granitic intrusions; both the deformation and intrusion are believed to be of early Tertiary age.

There are many areas of granitic rocks in the central part of the State, but their geologic age is uncertain. Volcanic and nonmarine sedimentary rocks of Cenozoic age are found over wide areas. All these rocks have been dislocated by normal faults that have produced the present basin-and-range topography. Some of this faulting has continued into Recent time.