Washington has not been a major gold-producing State; nevertheless, its annual output of gold has been steady, and contrary to the present nationwide trend of the industry, its production in recent years has increased (fig. 27). This paradox is exemplified by the Knob Hill mine in the Republic district, which ranks third among the leading lode-gold-producing mines in the United States, and the Gold King mine in the Wenatchee district, which ranks tenth (U.S. Bureau of Mines, 1960, v. 1, p. 509). 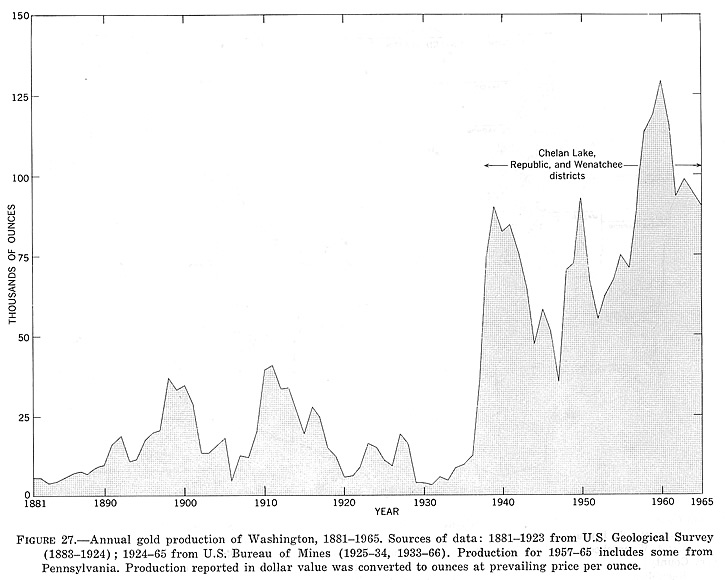 Gold was first discovered in the State in 1853 in the Yakima River valley by a party under the command of Capt. George McClelland exploring for a possible railroad route (Huntting, 1955, p. 28). By 1855, prospectors were active in the Colville district although the first discoveries were not made until 1883. In 1855, small placers were found along the Columbia and Pend Oreille Rivers. From the 1850's through the 1880's, placers were worked along streams in Okanogan, Whatcom, Chelan, and Kittitas Counties and along the major streams of the State - the Columbia and Snake Rivers.

By 1900, however, most of the placer deposits were exhausted. Important lode discoveries were made in the early 1870's, and as the placers were mined out, the lode mines became the chief producers. The Republic district in Ferry County is the major lode gold district in the State (fig. 28). Other important lode districts are the Wenatchee, Blewett, Mount Baker, Monte Cristo, Slate Creek, and Oroville-Nighthawk. 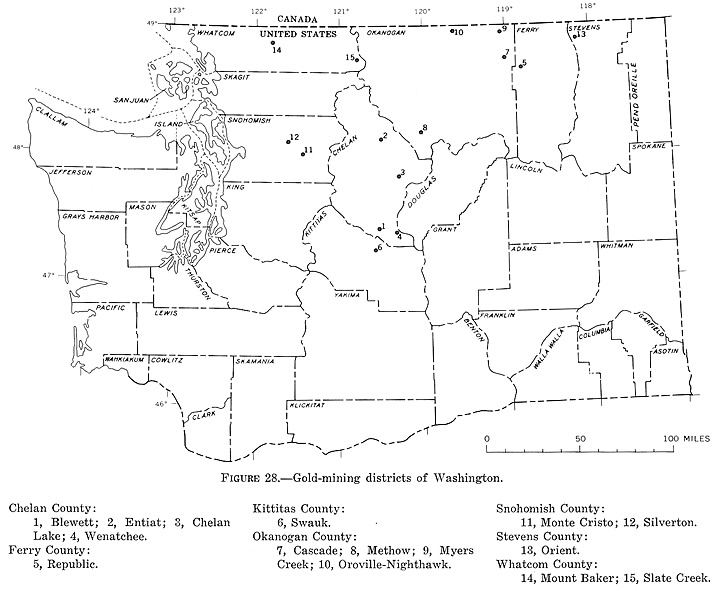 A significant contributor to the gold output in recent years was the Holden mine in the Chelan Lake district, Chelan County, where gold was produced as a byproduct from copper ores. This mine, however, was closed, probably permanently, in 1957 (A. E. Weissenborn, written commun., 1962).

Total gold production for the State from 1860 through 1956 was 2,844,331 ounces (U.S. Bureau of Mines, 1956, p. 1204). Production figures for the period 1957-65 include some production from Pennsylvania and therefore are too high by an uncertain amount, probably a few thousand ounces. In the data presented in the succeeding pages, a total gold production of only about 2,300,000 onces is indicated.