Mine Locations of the Chilson Brothers

The authentic history of the mining activities of the Chilson brothers who were active in the locating and developing of Arizona’s mineral resources.

Steve L. Chilson left Bandera, Texas with his family, in the year of 1868, bound for California.

He had, some years previously, made an agreement with the late Hon. John G. Oliver 125 yoke of oxen to the governor and his agents, for which he was to receive 5,000 acres of Southern California land, which was located in and around the present thriving little city of Santa Ana, California, the oxen being valued at $100 per yoke and the land valued at $2.50 an acre. A great deal of time was required to work out the business details, as all mail was carried on horse back and stages.

After it was definitely decided to come to California, Chilson set about to make preparations. Two years were required to build a wagon. Hardwood timber had to be selected from the woods, worked out in the rough and seasoned.

Everything ready, several hundred cattle rounded up for the long drive, a start was made. There were several other families with wagons, all of which made up a train, or caravan.

During the months that followed, the cattle and most of the horses were stolen by the Comanche Indians, and by the time he reached the Territory of Arizona, he had little, if anything, left with which to ward off the ravages of hunger and starvation. Every article that could be spared, including personal effects had been traded for provisions at the various outposts along the trail. The long, weary trip across the desert, with very little feed and days without water, had worked an extreme hardship on the stock.

It was a happy and most welcome day when Chilson and family arrived at Col. King Wolsey’s ranch at Agua Caliente Springs on the Gila River. Col. Wolsey was one of the early pioneers of the territory, a man of honesty and integrity, an Indian fighter, true to form, a developer of the natural resources of the land, as far as his finances would him to develop, honored and esteemed by all who knew him, a real man of the first magnitude.

Chilson leased the Wolsey ranch for a period of three years, planted a crop, harvested and continued on to California with several members of his family, leaving his three eldest sons, D. G., known as “Gip”, Emer E,. known as Eme and William H., known as Bill, to plant and harvest the second crop.

Eme and Bill then left for California with about 1,600 head of cattle, which belonged to Mr. Tanksley, leaving Gip with Col. Woolsey, to plant and harvest the third crop.

During the time the Chilson brothers were associated with Col. Woolsey they scouted the country far and wide, having many skirmishes and narrow escapes with the Apaches.

The colonel had told them many stories about the Indians and mining. Most of the Colonel’s mining experience, having been in the Bradshaw mountains and around Prescott, which was the capitol. Indian attacks were daily expectations and nightly fireside discussions.

During one of Col. Woolsey’s trips in the upper Salt River country and over in the Apache Peak country, he had a fight with a small band of Apaches during which he lost several men and horses. It was discovered that the Indians were shooting hammered silver bullets. This was in the vicinity of what was later Globe.

Such stories told by the colonel, together with personal experiences and the wild excitement over the discovery of the “Vulture” mine in the Vulture Mountains gave the brothers the mining fever.

During the fall of 1871, Gip came to California on horse back. Remaining in California until 1872, in which year he returned to Arizona and located the “William Penn” group of claims at Castle Dome. He worked this property for about one year. The ore was hauled to the Petote landing on the Colorado River. The landing and two steam barges were owned by Capt. Paul Ames and Capt. Ellis. The ore was shipped down the river to the Gulf of California, reloaded into coast steamers and shipped to the Melrose Sampling Works, San Francisco.

He returned to California in the fall of 1873, and remained until the spring, 1874, at which time he returned to Yuma. Upon his arrival in Yuma, he learned about the discovery of the “Silver King” mine in Pinal County. A great deal of excitement was on over the strike and a rush was on for the new silver district. While at Yuma he met Joe Kelly, who joined him on a trip to the “Silver King”. Joe Kelly remained at the “Silver King,” Gip continued on to the Globe country, which had been discovered by Coplin, Billy Long and Riggin. There was another man in the party, whose name I do not recall, and who was killed by the Indians at Bloody Tanks, as the boys were making their way to Florence.

Gip, recognizing the country, namely, the Apache Peaks, which were described by Col. Wolsey as being the country in which the colonel and his men had found the silver bullets which were shot by the Indians, as before mentioned, immediately set out to find the mine from which the silver came. While at Globe, which was beginning to look like a camp, he met a Dutchman, by name of Henry Wagner, who knew little, if anything, about prospecting or mining. Although Wagner did not have any money or outfit, Gip, had taken a liking to Wagner, explained to him what he had in mind, asking Wagner to join him on his hunt for the silver mine.

They started for the Apache Peaks, about twelve miles distance from Globe. It will be remembered that the town of Globe had not been laid out or a district organized. The mine had been discovered and named “Globe” on of account of the immense size of the property, and as the locators said, “She’s as big as the globe”. By nightfall, Chilson and Wagner made camp in a small basin close to the Apache Peaks, and finding a fine spring of water, the outlook was favorable.

The next morning Gip found native and horn silver nuggets from the size of small flakes up to ten and twelve pounds. He located a claim which he named the “Silver Nugget”, in which he located Wagner for a one-half interest. During the day they saw a great deal of fresh Indian signs and at early evening saw several head of Indian ponies in the distance. Shortly after dusk, they saw a small camp fire spring up in a canyon about one-half mile away. 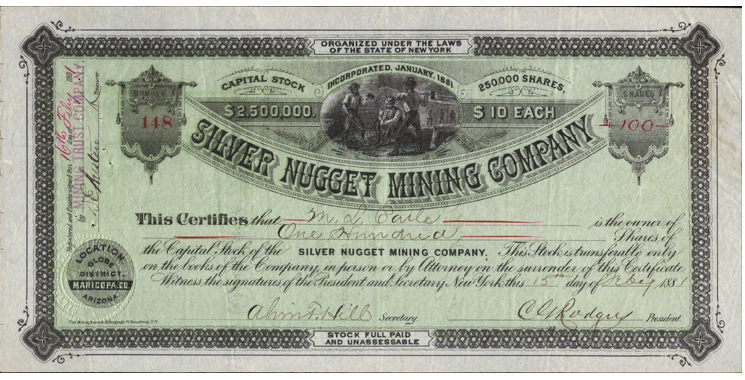 Gip, knowing the customs, habits and methods of the Indians, felt sure that a small band of Indian scouts were working the country and had made camp for the night. However, to make sure as to whether they were prospectors or Indians he decided to investigate more closely. He carefully made his way up the ridges to a point opposite the fire and he saw, as they passed back and forth and around the fire, that they were Indians. Returning to inform Wagner they broke camp and went to the “Globe” mine that night.

The following day or two Gip proposed to Wagner that they return to their rich discovery. Wagner was frightened to a frenzy, stating that he would not go back in there for all the mines in the country. Gip tried to convince him that they had a bonanza and that the Indians were probably scouts and were on the move. Wagner could not be convinced and said he would sell his interest for anything. Gip told him he had very little money. Wagner said, “I will take your pack, mule and what money you have.” Gip gave Wagner his mule, pack and $30 in cash, which was all the money he had.