Location
This extensive Sierra Nevada east gold belt district is in eastern Amador and Calaveras Counties in the general area of the town of West Point. It includes the Skull Flat, Glencoe, BummerviIle, Pioneer Station, and Buckhorn areas.

History
The town was first known as Indian Gulch but was renamed West Point after a geographic feature discovered by Kit Carson while he was enroute to Sutter's Fort in 1844. The streams and surface ores were mined extensively during the 1850s, when large amounts of gold were recovered. During the 1860s and 1870s many lode mines and 10 or more custom mills were active, but there was much difficulty with sulfides. Some activity was noted from the 1880s until 1914 and again during the 1920s and 1930s. Several mines have been intermittently worked since World War II, the chief operations having been at the Belden, Blackstone, and Centennial mines. This is one of the more productive districts of the east gold belt, and an extremely large number of mines exist.

Geology
The gold deposits are associated with a west-elongated body of granodiorite five miles wide and 15 miles long (see figs. 4 and 25) that has intruded graphitic slates, quartzites, and schists of the Calaveras Formation (Carboniferous to Permian).

Ore Deposits
Numerous north-trending and west-dipping (a few dip east) quartz veins arc found in the granodiorite or in the adjacent metamorphic rocks. The veins usually are one to five feet thick, have persistent strikes, and belong to one of three main vein systems that have not been mapped. Narrow diorite, quartz-diorite, and aphlite dikes commonly are associated with the veins. The ore bodies contain free gold and abundant sulfides, especially galena, which is nearly always associated with high-grade ore. The ore shoots usually have horizontal stopmg lengths of 150 feet or less, but several were 300 to 400 feet long. Milling-grade ore commonly averages one ounce or more in gold per ton, and much high-grade ore has been recovered. Few of the mines have been developed to depths of more than a few hundred feet. It has been estimated that there are more than 500 mine shafts in the district. 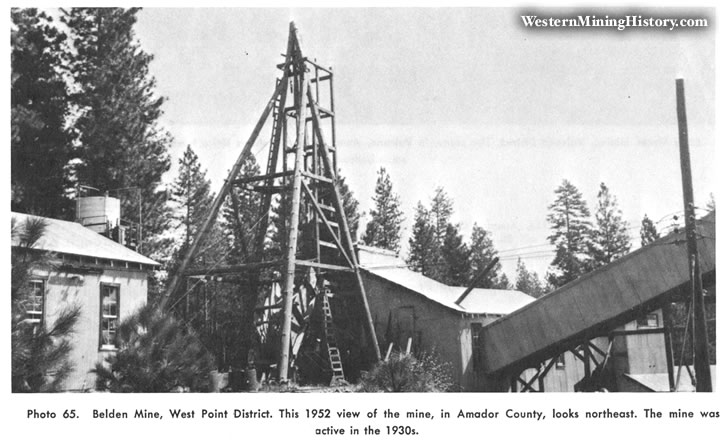