This article was originally posted in the forums on May 16, 2008 by D E Russell

There is perhaps no manufacturing company that can look back with more pride and satisfaction upon their record of industrial achievements than the Ingersoll Rock Drill Co. Every year since 1871 they have had one, two, or three medals awarded them by the managers of the various exhibitions held in New York, Brooklyn, and Philadelphia in the United States; London, Leeds, Manchester, and Cornwall in England; and Paris in France. Among the comparative tests the most remarkable was that in Cornwall, England, where the Ingersoll drill worked in competition with the diamond drill, when the former bored the same depth of hole in half the time it could be accomplished by the diamond drill.

There are, of course, other considerations which should enter into the estimate of the value of a rock drilling machine; they are durability, light weight, and consequent portability. No other machine made previous to the introduction of the Ingersoll rock drill could claim any of these essential properties. They were so defective and repairs were of such a serious and ruinous expense that no one would take the risk of steam drilling, and hand labor was persisted in; then the machines were so ponderous and massive as to be very unwieldy and laborious to handle and move about. In addition, the frame-work supporting the working parts was so clumsy that it was impossible to introduce the machine into narrow and uneven rock excavations, places where drilling machines are most needed.

All these objections were overcome by giving the machine here represented the following qualities:

1st. Durability, so that expense could be saved, both as to repairs and loss of time resulting from breakage;

2d. Simplicity, so that any ordinary workman could operate the machine efficiently;

3d. Light weight, so that two persons could easily handle and carry the drill, which is extremely essential in mines;

4th. Adjustability, so that the machine could be readily placed in position for boring holes at any angle.

In regard to the power applied, in open out-side work steam is used, but under ground, where foul air exists and the presence of steam would increase the temperature and fill the surroundings with a stifling vapor, compressed air becomes a necessity. This compressed air serves the purpose of a motive power equally as well as steam; and more than that, it not only drives the drill, but cools the atmosphere, thus giving the workmen substantial comfort and fresh air. The compressor is located near the mouth of the shaft or tunnel, and pipes are laid to within a reasonable distance of the drilling work. These pipes are sufficiently large to allow free transmission of the air, thus avoiding friction, resulting from too small diameter of pipe. If the mine or tunnel is of long distance, it is often advisable to place a reservoir midway between the compressor and the drills; this serves to store up the compressed air in reserve for shorter conveyance from thence to the drilling work. It should always be borne in mind that the pipes must be much larger than the requisite discharge at the drills, for if it were otherwise there would be great friction resulting from the pressure of air constantly rushing through to furnish a sufficient quantity to drive the machines; for example, if a shaft were 1,200 feet in depth, it would be preferable to place the reservoir at a depth of say 900 feet, and between that point and the drills small pipe and flexible hose would be used; thus between the compressor and reservoir it would be advisable to use pipe quite large, for in doing so there would be an absence of friction, the pipes being larger they would always be stored full, and in a measure act as a reservoir for the entire distance. 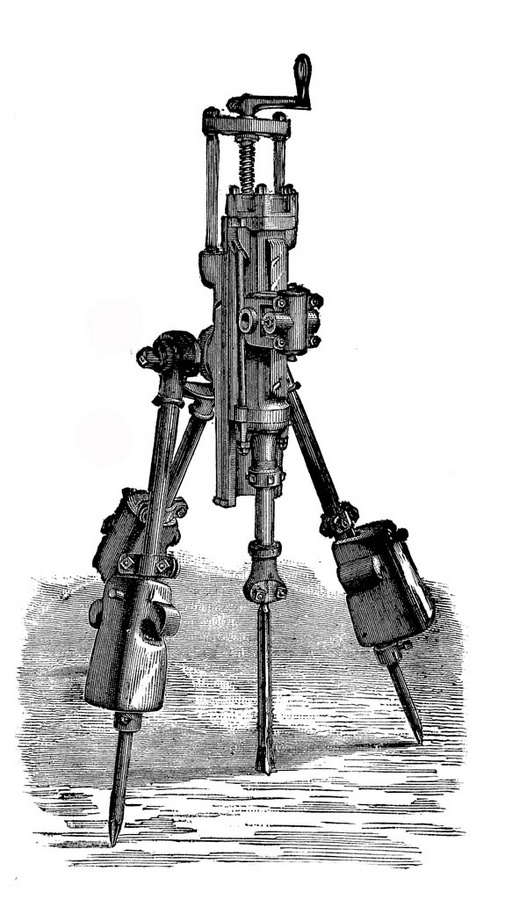 The compressor must be placed adjoining the steam or water power employed to drive it, so that one person will be sufficient to attend properly to both. If water power is used to work the compressor, the water wheel is applied by attaching to the shaft of time wheel a belt or gearing, and connecting with the compressor. Steam compressors have a steam engine attached and are driven by steam direct; others have a driving pulley and are operated by a belt from a separate engine or water wheel. In using water power there is a saving of fuel, cost of steam boiler, and in the price of the compressor. With water there is only the cost and erection of wheel, while compressed air can be conveyed for miles if necessary.

These drills are especially adapted for quarrying and mining, and are in use by many of the largest firms engaged in such work, among whom we may mention the following: S. A. Hutchings, R. R. contractor, Denver, Col.; C. F. Dunbar, submarine work, Port Colborne, Canada; Weatherbees, Sherman & Co., iron mine, Port Henry, N. Y.; Bodwell Granite Co., Rockland, Me.; Maj. H. M. Roberts, U. S. government engineer, Milwaukee, Wis.; C. P. Dixon, Dix Island, Rockland, Me.; H. McLaughlin, Bangor, Me.; Diamond Hill Granite Co., Providence, R. I.; Dirigo Slate Co., Monson, Me.; Knoxville Marble Co., Knoxville, Tenn.; Louisville Cement Co., Louisville, Ky. One of the greatest works on which these drills are being employed is the Sutro tunnel; while they are also used in twenty-four mines of the Comstock lode.

The office of the Ingersoll Rock Drill Co. is at 1 1/2 Park Place, New York. 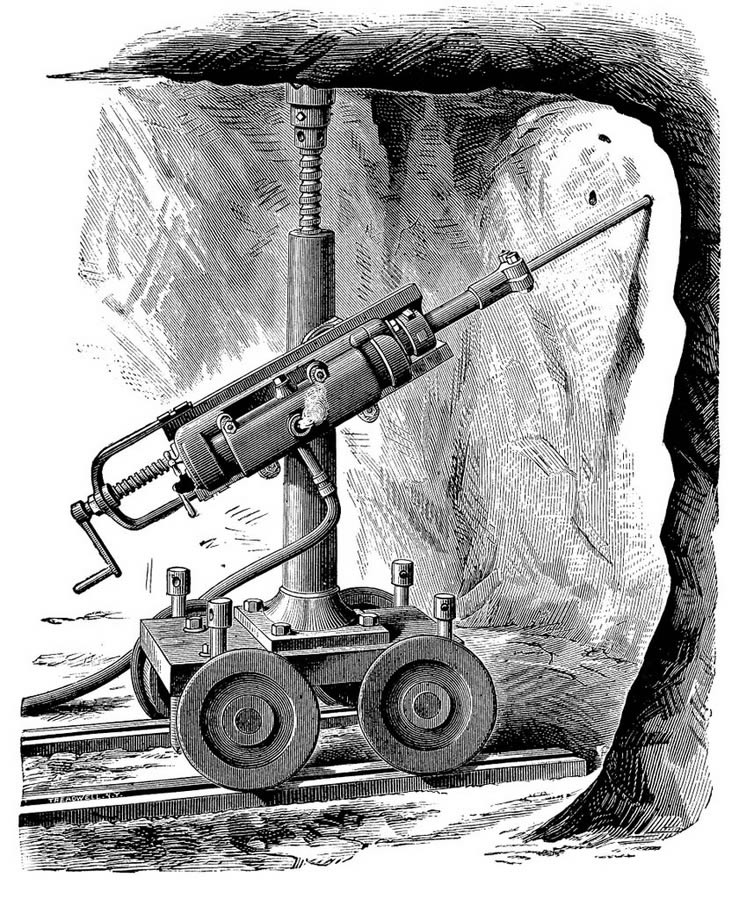