Mine Discovery Tools are available for Jackson County. Click here for more info.

The first gold mining in the State was in Jackson County. In 1852, placers along Jackson Creek were worked. Soon afterward placers were discovered along other creeks in the vicinity, and mining of these deposits became a major industry in the county (Oregon Department of Geology and Mineral Industries, 1943, p. 11). Lode deposits were discovered as early as 1859, but the chief gold production has come from the placers. The major districts in the county are Ashland, Gold Hill, Jacksonville, and Upper Applegate.

The geology of Jackson County is given in "Oregon Metal Mines Handbook" (Oregon Department of Geology and Mineral Industries, 1943, p. 13-19). Schists of pre-Mesozoic age underlie the southwest part of the county, and Triassic greenstones and metasedimentary rocks, named the Applegate Group by Wells (1956), underlie its western part. In the northwest part of the county is a small patch of black slate, conglomerate, and tuffaceous sandstone of the Galice Formation, of Jurassic age.

The schists, greenstones, and Galice sedimentary rocks were intruded first by masses of peridotite, now altered to serpentine, and later by granitic rocks. In the central part of the county, in Bear Creek and Cottonwood Creek valleys, remnants of the marine Hornbrook Formation of Cretaceous age are present (Wells, 1956). A narrow band of sandstones of the Tertiary Umpqua Formation underline Bear Creek valley, which crosses the county in a northwest direction. 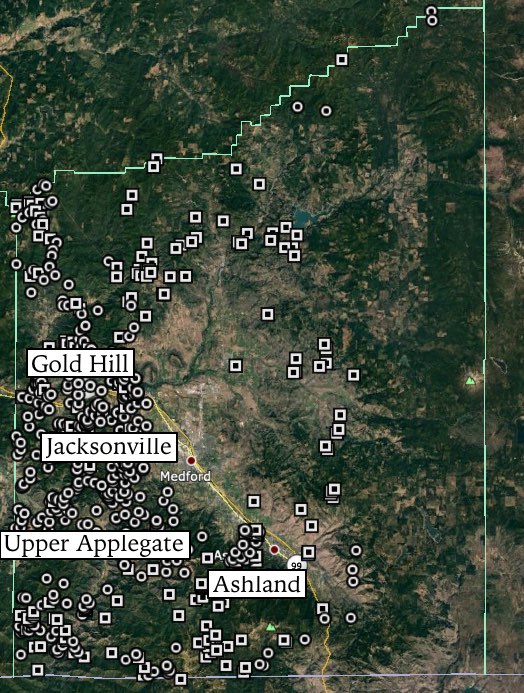 Circle markers locate the gold mines and square markers the non-gold mines of Jackson County. The four primary gold districts are identified. Image is from the WMH Mine Discovery Tools for Google Earth Pro

There was sporadic activity in the district up to 1942, but only a few ounces have been reported since that time. Production of the district from 1933 through 1959 was 1,764 ounces of lode gold and 163 ounces of placer gold. Total production through 1959, including estimates of early production, was about 66,400 ounces of gold. At Forty-nine Diggings, the major placer mine in the district, Quaternary gravels were originally mined, but productive channels were also found later in conglomerates of the Cretaceous Hornbrook Formation (Anderson, 1914, p. 90-93). Other placers were in the Quaternary gravels along Bear Creek and its tributaries.

Placers were worked in the district as early as 1853, but the big strike occurred in 1859 when lode gold was discovered; an estimated $400,000 was mined from the Gold Hill pocket in the first year (Winchell, 1914b, p. 154). The chief lode mines in the district were the Braden, Sylvanite, and Whitney.

The lode deposits were important in the early days, but, with the exception of the Sylvanite mine, they were small though rich and were quickly mined out. The placers on Foots, Sam, Galls, Sardine, Evans, and Pleasant Creeks were worked on a fairly large scale for many years. Dredges and hydraulic methods were in use from the early days until as late as the early 1940's (Oregon Department of Geology and Mineral Industries, 1943, p. 42). The district was active on a small scale as recently as 1957.

Metavolcanic rocks of Triassic age are the most abundant country rock in the Gold Hill district (Wells and others, 1940). These were intruded by masses of peridotite and granite, and considerable folding and thrusting accompanied the intrusions. Conglomerates and arkoses of Cretaceous age cover parts of the area, and Tertiary sediments occur in the central part of the district. The veins are genetically related to the granitic intrusive and occur in it or in the surrounding Triassic sediments.

The veins consist of quartz lenses in fractures a few hundred feet long (Wells, 1956). In many veins, crushed rock fills the fractures between quartz lenses. The ore zones consist of mineralized quartz or crushed rock, commonly accompanied by seams and masses of chloritic material. Most of the gold is free and unassociated with sulfides, but in some veins pyrite, pyrrhotite, and minor galena and sphalerite may constitute as much as 3 percent of the ore.

The initial gold discoveries in Oregon were made in this district in 1851 on Jackson Creek, and mining began the following year. The placers were profitable until about 1870, after which the Chinese worked the lower grade gravels that remained (Winchell, 1914b, p. 138). In the 1930's the old placer workings were dredged (Oregon Department of Geology and Mineral Industries, 1943, p. 132).

Quartz veins were discovered in the 1860's; the chief mines were the Town and the Opp. The lode deposits of this district are similar to those of the Gold Hill district in that they are extremely rich pockets of auriferous quartz which can be mined out in a short time. With this type of activity it is difficult to keep production records; consequently, estimates must be accepted in lieu of factual data.

Production of the district from 1904 through 1959 was 7,090 ounces of lode gold and 9,172 ounces of placer gold. The district probably yielded a minimum of 26,000 ounces, including the early estimates of the Opp and Town mines, and possibly twice that much, if the early unknown placer production is included.

Wells (1956) mapped and described the geology of the district. Its southern and western parts are underlain by altered basic flows, breccias, and pyro-clastics interlayered with sedimentary rocks, known as the Applegate Group of Late Triassic (?) age. These rocks were intruded by a diorite mass, part of which crops out in the northwest corner of the district. Rocks of the Hornbrook Formation (of Late Cretaceous age) are exposed in a band along the west edge of the Bear Creek valley. From Medford eastward, the district is underlain by the Umpqua Formation, a succession of sandstones, shales, and conglomerates of Tertiary age.

A wide strip of alluvium in the central part of the district fills the valley of Bear Creek. The lode deposits are gold-quartz veins containing minor amounts of sulfides. The veins cut rocks of the Applegate Group and may be related to the diorite intrusive.

This was predominantly a placer district. Placers first were discovered along Forest Creek, and the district was organized in 1853 (Winchell, 1914b, p. 125). The original discoveries were soon worked out, but other rich placers were found along Ferris Gulch, and Althouse, Humbug, Keeler, and Sterling Creeks. Hydraulic methods were introduced in the early 1880's; the Sterling mine, with an estimated early production of $3 million (Diller and Kay, 1909, p. 69), was one of the most successful of the hydraulic mines. Other large producers were the Layton, Pearce, Spaulding, and Old Sturgis mines. More recently draglines were used in this district.