Most of the ore deposits in Utah are found in its western part - in the mountain ranges in and flanking the Great Basin. The most productive districts, principally the Bingham, Tintic, Camp Floyd, and Park City, are south and east of Salt Lake City. Through 1960 Utah produced about 17,765,000 ounces of gold and ranked sixth among the States in total gold production; 13 districts in 9 counties yielded more than 10,000 ounces of gold each through 1957 (fig. 25). 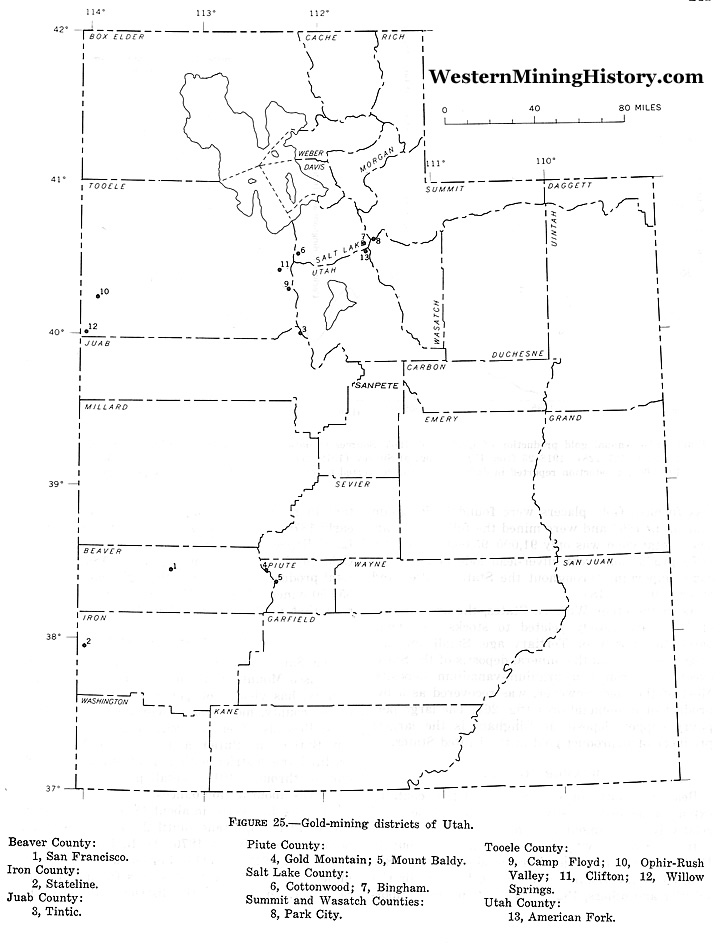 The State's early development was influenced more by religious motives than by the gold fever which drew settlers to the other Cordilleran States. Furthermore, placer deposits, the first incentive to prospecting in the other Western States, were unimportant in Utah.

In 1847, when Utah was still part of Mexico, the Mormons crossed the plains and formed a settlement in the valley of Great Salt Lake. Under the direction of the church, they established other settlements in a few years on nearly all the important streams where irrigation was practicable or where conditions were especially favorable for stock raising. Mining, however, was discouraged (Butler and others, 1920, p. 117-118).

Nevertheless, the presence of metallic deposits in Utah was known to the early Mormon settlers, for small amounts of lead ore were mined in the 1850's for making bullets. Active prospecting, however, was first undertaken in 1862 by members of the California Volunteers, stationed at Camp Douglas near Salt Lake City, many of whom were prospectors and miners from the gold fields of California.

Though lead ore was mined earlier from the Rollins mine in Beaver County, the first claim in Utah was located on outcrops of lead carbonate in Bingham Canyon in September 1863. In December of that year the first mining district, the West Mountain, was formed. Gold placers were found in Bingham Canyon in 1864 and were mined the following year. Their total yield was only 91,000-95,000 ounces. By 1870 production from silver-lead lode deposits became important throughout the State (Butler and others, 1920, p. 118). 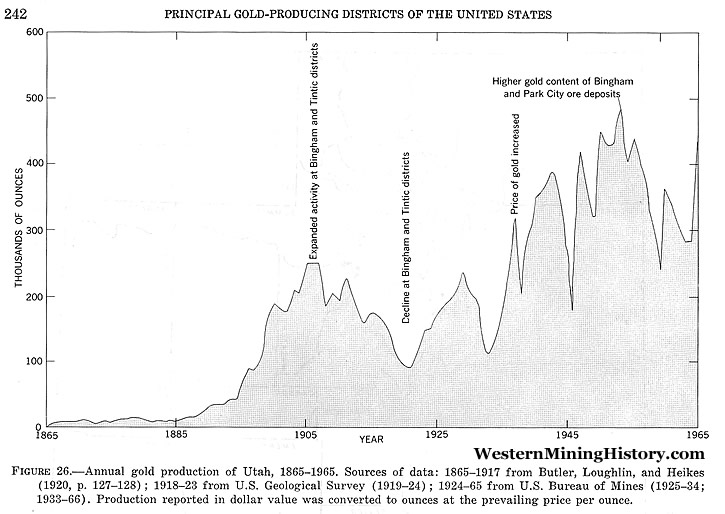 As in the other Western States, the ore deposits of Utah are closely related to stocks and small batholiths mostly of Tertiary age. Small amounts of gold occur in all the mineral deposits of the State, except the iron and uranium-vanadium deposits. Most of the gold, however, was recovered as a byproduct of base-metal ores (fig. 26). The large porphyry copper deposit at Bingham is the largest producer of byproduct gold in the United States.