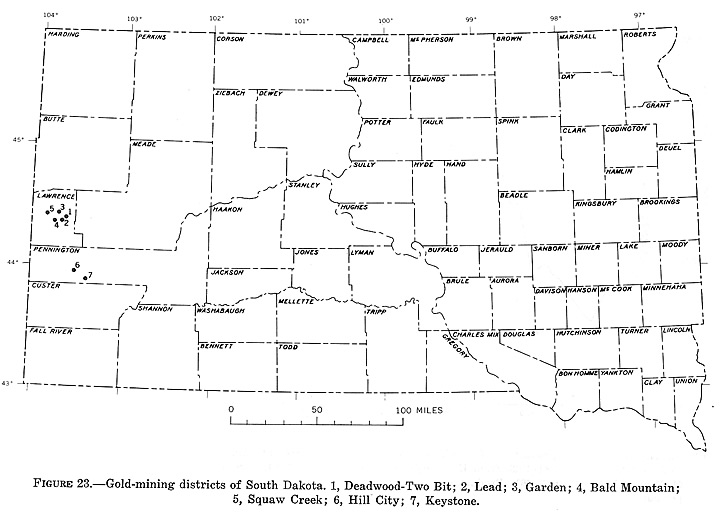 The first documented discovery was made in 1874, during General George A. Ouster's expedition to reconnoiter the Black Hills. The actual discovery is credited to two miners named Ross and McKay, who were attached to the expedition and found gold in gravel bars along French Creek. News of this discovery attracted many prospectors to the area, even though the country then belonged to the Sioux Indians who were not enthusiastic to have their domain overrun.

Equally adamant in this respect was the United States Government which was bound by a treaty to keep white men out of the Black Hills. In 1875, another expedition under the direction of W. P. Jenney was sent to the Black Hills to officially report on the potential mineral wealth of the region. The French Creek discoveries were confirmed, and numerous additional occurrences of placer gold were reported (Newton and Jenney, 1880, p. 226-294).

In 1876 the Black Hills were ceded to the United States, and prospectors flooded into the area and found gold in Deadwood Gulch and Rockerville. By 1880 from $6 to $8 million worth of placer gold had been mined, about half of which came from Deadwood Gulch (Lincoln, 1937, p. 11-12).

The first lode claims were located in December 1875 in Precambrian rocks in the Lead district; these were later purchased to form the original holdings of the Homestake Mining Co. As the placers became depleted, the Homestake Co., through acquisition of other properties and intelligent development, became the leading operator in the Black Hills and the largest gold producer in the United States (fig. 24). 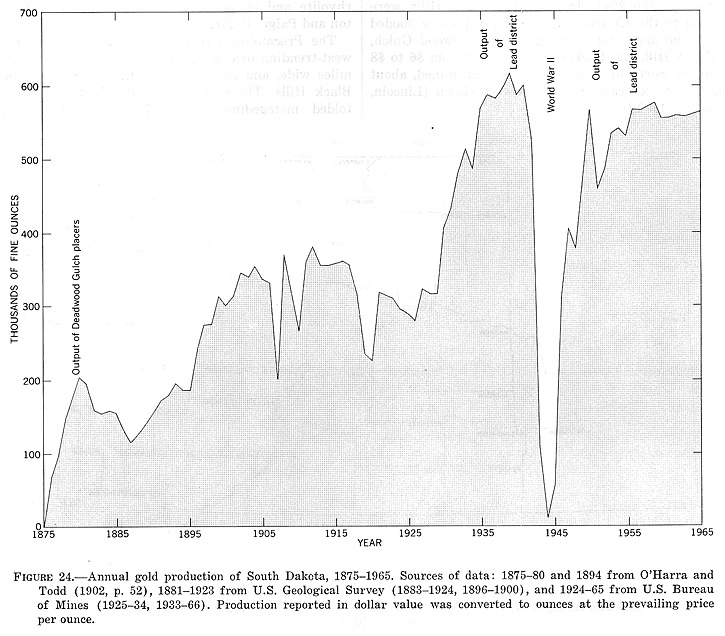 The Black Hills consist of a core of Precambrian rocks surrounded by concentric bands of Paleozoic and Mesozoic rocks that dip gently away from the core. They are intruded by sills, stocks, and dikes of igneous rocks that range in composition from rhyolite and phonolite to quartz monzonite (Darton and Paige, 1925).

The Precambrian rocks are exposed in a northwest-trending oval area about 60 miles long and 25 miles wide, and they form the highest part of the Black Hills. These rocks consist of (1) intensely folded metasedimentary rocks, including schist, slate, and quartzite, (2) amphibolites that cut the metasedimentary rocks, and (3) granite that intrudes the other two (Noble and Harder, 1948).

The famous Homestake ore body occurs in a cummingtonite schist unit, known as the Homestake Formation, which ranges from 200 to 300 feet in thickness and lies stratigraphically about 2,000 feet above the base of the Precambrian rocks exposed in the Lead area.

Encircling the outcrop area of Precambrian rocks is a thick section of Paleozoic sedimentary rocks which are, in ascending order, the Cambrian Deadwood Formation, the Ordovician Whitewood Formation, the Mississippian Englewood and Pahasapa Formations, the Pennsylvanian Minnelusa Formation, and the Permian Opeche Formation and Minnekahta Limestone. The outer rim of the Black Hills is made up of a series of rims and hogbacks of Mesozoic rocks.

The main period of deformation that produced the Black Hills dome occurred in post-Cretaceous time, during the Laramide orogeny. The structures seem to be a result of vertical forces, caused probably by magmatic intrusions (Noble, 1952).

In the early days of mining in the Black Hills substantial amounts of gold, silver, and lead were obtained from deposits in the Paleozoic rocks, but these were soon exhausted and the bulk of the gold has come from the Homestake replacement ore bodies. The main gold-producing area consists of about 100 square miles in the northern Black Hills. Seven districts have produced more than 10,000 ounces of gold; five are in Lawrence County and two, in Pennington County.