California has been the source of more than 106 million troy ounces* of gold, the most productive state in the Union. However, production has greatly declined in recent years because of high costs and depletion of easily accessible deposits.

Although gold was mined in California in the late 18th and early 19th Centuries, the gold rush did not begin until after Marshall's discovery at Sutter's Mill in 1848. Thousands of gold seekers soon arrived, and in a few years much of the state was permanently settled. Gold production attained an all-time high of $81 million in 1852 but then declined because of the exhaustion of the rich surface placers. At the last government-set price of $35 per ounce, the 1852 amount would have been about $138 million.

Hydraulic mines became the largest sources of gold until curtailed by court order in 1884. Lode mines and dredges were the principal sources after that date. During the depression years of the 1930., gold output in the state was nearly as high as it had been during the gold rush. Gold mining was curtailed during World War II and has not recovered since.

A number of spectacular nuggets and masses of pure gold were recovered in California during the early days. The most famous were the 195-pound mass of gold from Carson Hill and the 54-pound Willard nugget from Magalia. Small high-grade ore shoots or pockets have been found in many districts, but the richest and most numerous have been in the Alleghany district of Sierra County.

Although gold is found in many areas in California, the most productive districts are in the northern and central portions of the Sierra Nevada. The primary deposits usually consist of gold-quartz veins in metamorphic rocks and are associated with the intrusion of the Sierra Nevada batholith. The most productive lode-gold districts in the Sierra Nevada have been the Grass Valley, Nevada City, Alleghany, and Sierra City districts, those of the Mother lode belt, and several in the so-called East and West Gold Belts. Several districts are in the southern end of the range. The Sierra Nevada placer deposits are divisible into the older or Tertiary deposits, which were mined by hydraulicking and drifting, and the younger or Quaternary stream deposits, which have been mined by dredging. The principal Tertiary deposits are in the La Porte, Poker Flat, Magalia, Cherokee, North Bloomfield, North Columbia, Dutch Flat, Damascus, Forest Hill, Iowa Hill, Mokelumne Hill, and Columbia districts. The largest dredging fields were at Hammonton, Folsom, Oroville, Camanche, la Grange, and Snelling.

In the Klamath Mountain, the second most-productive province, the largest sources of gold have been the streams of the Klamath-Trinity River system. The older terrace deposits along the sides of the present stream channels also have yielded much gold and were mined by hydraulicking. The most productive source of lode-gold has been the French Gulch district of Shasta and Trinity Counties. Other important lode-mining centers were the Harrison Gulch, liberty, Collahan, Sawyers Bar, Weaverville, and Old Diggings districts.

The Basin Ranges and Mojave Desert provinces of eastern and southern California have yielded substantial amounts of gold. The gold occurs either in epithermal deposits in brecciated silicified zones of Tertiary volcanic rocks or in mesothermal quartz veins of older metamorphic and granitic rocks. Gold also has been recovered from dry placers in several districts. The Bodie district has been the most important gold source in the Basin Ranges, while the Mojave, Rand, Stedman, and Cargo Muchacho district, contain the most productive mines in the Mojave Desert

Moderate amounts of gold have been mined in the Transverse and Peninsula, Ranges in southern California, the principal sources having been the Frazier Mountain Saugus, Acton, Pinacate, Julian-Bonner, and Cuyamaca districts. The mineral also has been recovered from the Modoc Plateau province in northeastern California, the main source having been the Hayden Hill district. Small amounts of gold have beer produced in a number of places in the Coast Ranges. 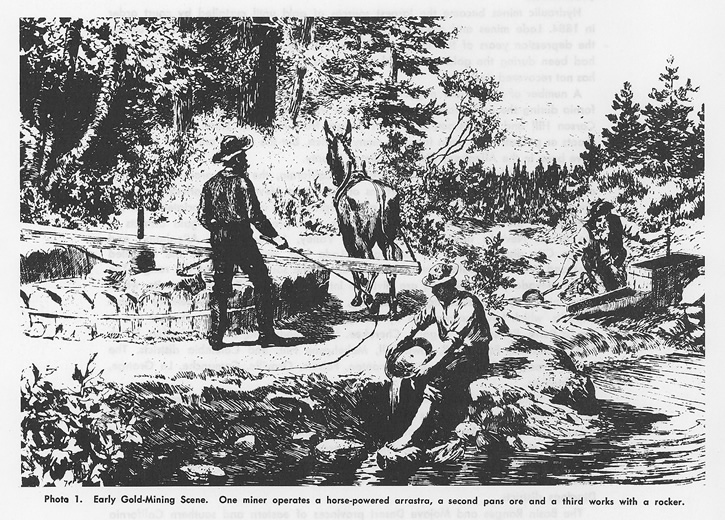