Between 1848 and 1967, California was the source of more than 106 million troy ounces of gold. This total was far greater than that for any other state in the Union and represented about 35 percent of the total United States production.

California's gold mining has been important in the history and development of the western United States. The influence it has had on the development and perfection of mining and metallurgical processes also has been significant. Although world gold production has gradually increased in recent years, chiefly because of increased output in the Union of South Africa and the Soviet Union, United States production, particularly that in California, has diminished. This diminishing trend is attributable to increased costs for labor and supplies combined with, until recently, a fixed price for domestically mined gold ($35 per fine ounce), the expense of reconditioning mines shut down during World War II, and depletion of many gold deposits. Another factor in California is the increased real estate value of many gold-bearing properties. In addition, a number of gold mines and gold-bearing deposits have been inundated by reservoirs.

The word "district" as used in this publication denotes an area or zone of gold mineralization. The location and extent of these districts are determined by the occurrence of deposits that have yielded gold in commercial amountS. Often the limits of the individual districts are not well defined, because the boundaries hetween rocks that have yielded commercial ore and those that have not are indefinite. Except in portions of the desert regions, the limits of the named mining districts in California often are uncertain. Commonly, what has been referred to as an organized mining district actually has been nothing more than a center of mining operations with an appropriate geographic name. The names used in this report are either those of the corresponding organized districts or geographic names long used to designate centers of mining operations. If a district has had several names, the most common name is used in this report. A list of alternate names appears in an index at the back of the book.

The size and productivity of the gold districts of California vary widely. Some are scores of square miles in extent and others cover only a few square miles. However, size often is no indication of the richness of the deposits or of the total value of output. Some lode-gold districts, such as Grass Valley, Alleghany, and Randsburg, contain many rich veins in a small area. Some placer-gold districts contain channel deposits of several different ages, and others contain deposits only of one age. Some districts are mostly lode, some mostly placer, and others have both lode and placer deposits. In the Sierra Nevada and Klamath Mountains, the gold mineralization is extensive. However, studies show that the bulk of the gold production has come from distinct districts within these major regions.

The organized mining districts were important during the days of the frontier. These were organized by the miners themselves to establish law and order. The miners would meet to draft bylaws defining the size of claims and territorial jurisdiction of the district. Commonly these laws included procedures for the punishment of claim jumpers, sluice robbers, and murderers. A recorder was appointed to keep records. The customs and laws were derived chiefly from European mining districts. The importance of the organized mining districts diminshed after the Federal Mining Acts of 1866 and 1872. The official records of some of the old districts still exist and are on file in county recorders' offices. 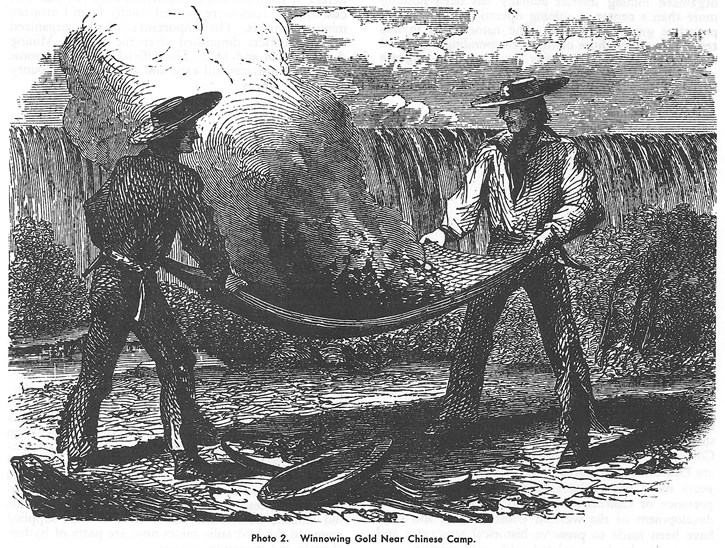