A considerable number of rich, small ore pockets or pocket shoots have been developed in mines in some lode-gold districts. Many of these pocket shoots were in districts commonly referred to as "high-grade" belts. The richest and most famous in California is the Alleghany district in Sierra County. Much of the output of this district has been from small but rich pockets. Other noted high-grade districts are the Sonora, West Point, Soulsbyville, Kinsley, Whitlock, Spanish Flat, and Kelsey-Garden Valley districts. A number of other lode-gold districts, such as the Grass Valley, Nevada City, Sierra City, French Gulch, Cargo Muchacho, Bodie and several Mother Lode districts, have yielded appreciable amounts of high-grade ore.

High-grade pockets usually occur in the veins and consist of a mixture of vein material and free gold. In some pockets, sulfide minerals are abundant, but in others they are absent or nearly so. In a few districts telluride Of silver minerals are associated with the gold. Table 5 lists some of the famous high-grade pockets or pocket are shoots discovered in California. 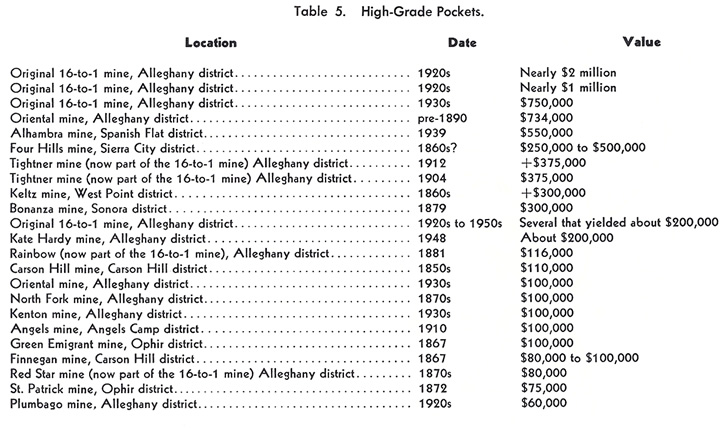