For many years gold was California's most valuable mineral commodity, and even today despite high mining costs and a fixed selling price, gold ranks fourth in the value of mineral commodities in the State. The total amount of gold production reported in California from 1848 through 1965 was 106,130,214 ounces: about 68,200,000 ounces placer and about 37,900,000 ounces lode and byproduct gold.

The discovery of gold in California usually is attributed to James W. Marshall, whose highly publicized placer discovery, on the American River in El Dorado County in 1848, led to the gold rush of 1849. But long before Marshall's discovery, as early as 1775, Mexicans mined small amounts of placer gold from the Colorado River and lode gold from the Cargo Muchacho Mountains (Clark, 1957, p. 223), and in the 1830's gold was discovered in Los Angeles County.

These early operations were in remote, sparsely settled areas under the control of Mexico and were far from any lines of communication; thus the news did not spread.

The early placer operations, 1848-49, were small scale, the deposits were quickly depleted, and attention soon was directed to the large deposits of gold-bearing gravels of Tertiary age.

In 1852 large-scale hydraulic mining began on these deposits, which for many years were the main source of the State's gold production (fig. 8). These operations were so large they caused heavy silting of navigable stream channels, partial blockage of tributary streams, and ruination of agricultural lands by debris-laden streams during spring floods. This silting even caused the Golden Gate bar in San Francisco Bay to move inshore.

Beginning in 1884, court actions brought against the miners to curtail this devastation culminated in the passage by Congress of the California Debris Commission Act (or Caminetti Act) in 1893. As a result, the cost of constructing required debris dams and settling basins caused many operators to abandon large-scale hydraulic mining in favor of drift mining of the buried Tertiary channel gravels.

Lode mining of gold became important in the 1860's, and between 1884 and 1918 gold-quartz veins were the major source of California's gold production. Beginning in 1898 placer mining was rejuvenated when huge bucket dredges were introduced to work the auriferous gravels of the rivers flowing westward from the Sierra Nevada.

The most productive gold-bearing region in the State is in the central part of the Sierra Nevada on the west slope (fig. 9). This region contains the Tertiary channel gravels, the Quaternary stream deposits, the Grass Valley-Nevada City lode district, the Alleghany and Downieville districts, and the complex vein system of the Mother Lode, East Belt, and West Belt. 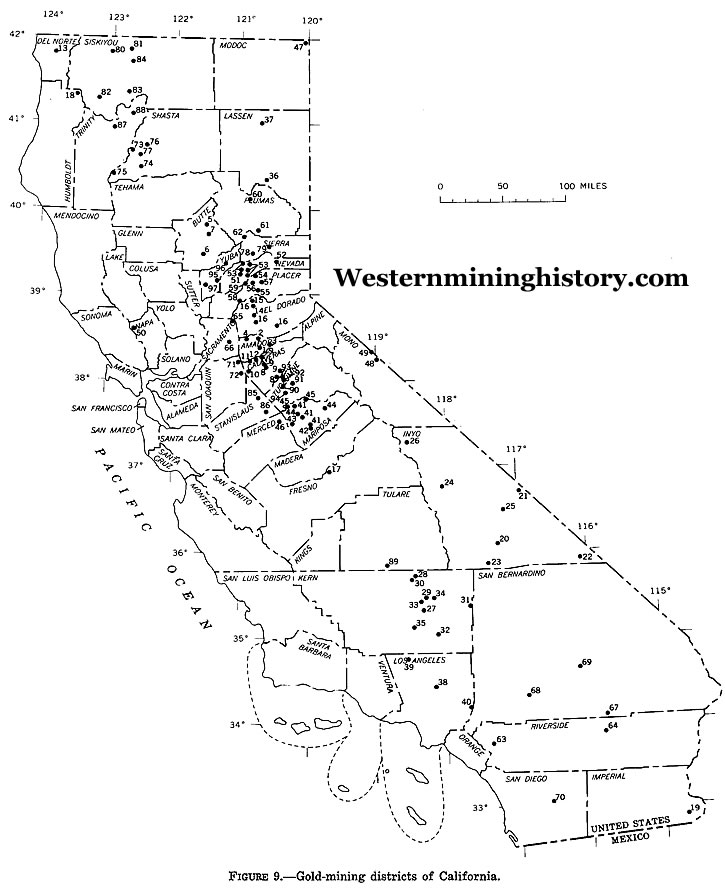 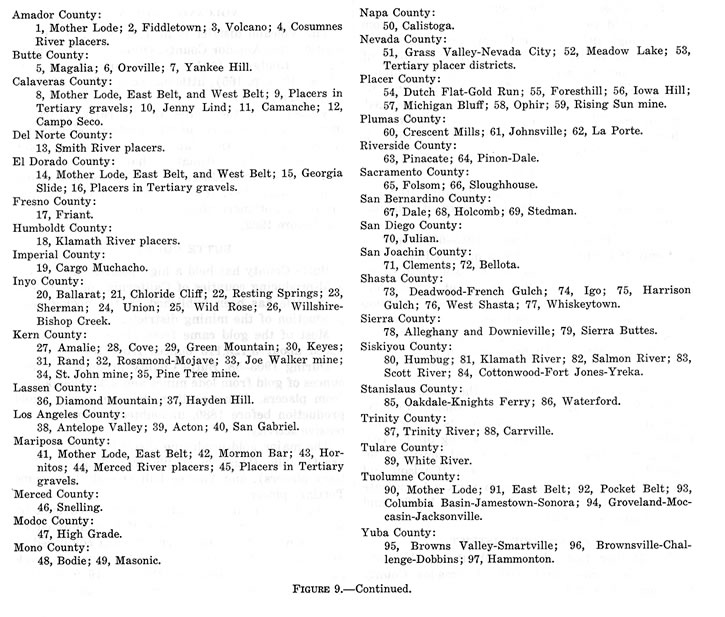 The Mother Lode and the placer deposits are exploited in many individual mining districts in numerous counties. The history and production of each of these districts are distinctive, but the geology is much the same. To avoid needless repetition of the geology of the Mother Lode in each of the five counties it traverses and the geology of each Tertiary placer district, this material is outlined in the following paragraphs.

The auriferous gravels of California are of two general types: buried placers of Tertiary age and normal stream placers of Quaternary age. The gold was derived from the many gold-bearing veins, including those of the Mother Lode, in the mountains that had been formed at the close of Jurassic time by the intrusion of the Sierra Nevada granitic batholith (Lindgren, 1911, p. 9-11), most of which was emplaced in Late Cretaceous time (Curtis and others, 1958, p. 10).

A long period of erosion followed during Tertiary time when the mountains were nearly leveled, and gold from the eroded parts of the veins was concentrated in stream channels. Some of the resulting Tertiary placers were extremely rich. The Tertiary drainage system consisted of six main streams (Lindgren, 1911, p. 33-37). One of these, the Jura River, flowed northward in Plumas County; the others flowed westward.

Near the end of the Tertiary Period, much of the region was covered with volcanic debris, composed chiefly of andesite. The old drainage pattern was obliterated, but a new one soon developed on the new volcanic surface as the present Sierra Nevada range was uplifted. During Quaternary time the new streams cut deep canyons through the volcanics, exposed and eroded parts of the old Tertiary channels, and reconcentrated some of the gold in the gravels of the new streams.

Only scattered remnants of the Tertiary channels which are higher than the channels of the present streams are now found preserved beneath ridges of resistant volcanic rocks. Rich Quaternary placers have been mined very successfully in numerous districts along the present-day Feather, American, Yuba, Mokelumne, and Merced Rivers, and low-grade Quaternary placers have been profitably dredged in the central valley where the gradient of these rivers is nearly level and only fine-grained gold is concentrated.

Outstanding among the lode deposits of the Sierra Nevada is the Mother Lode system of gold deposits, a strip of mineralized rock 1 to 4 miles wide that extends 120 miles along the lower western flank of the Sierra Nevada. From near Georgetown in El Dorado County it extends southward to Mormon Bar, 21 miles southeast of Mariposa, in Mariposa County. The five counties it traverses El Dorado, Amador, Calaveras, Tuolumne, and Mariposa are often referred to as the Mother Lode counties.

The bedrock in the Mother Lode counties consists of steeply dipping, northwest-trending belts of phyllite, schist, slate, and greenstone, intruded locally by small bodies of peridotite and granodiorite (Knopf, 1929, p. 8-9). The oldest rock unit in the area, the Calaveras Formation of Carboniferous age, is composed chiefly of black phyllite with minor quartzite, limestone, and chert. Green amphibolite schists are interbedded with the Calaveras Formation and are believed to be of equivalent age (Knopf, 1929, p. 10).

Overlying the Calaveras Formation is the Mariposa Slate, of Jurassic age. This unit, which is considerably less metamorphosed than the Calaveras, consists of black clay slates and graywacke with small local bodies of conglomerate, sericite schist, and limestone (Knopf, 1929, p. 12). Greenstones are intimately interlayered with the black slate. The rocks have been invaded by intrusives of several ages.

The Calaveras Formation is cut by metadiorites, and both formations are intruded by lenses of serpentine, which was originally peridotite, and by dikes and masses of hornblendite, gabbro, granodiorite, and albitite porphyry. Potassium-argon age determinations on minerals of some of these granitic bodies give evidence of two seperate orogenies in Mesozoic time one in Late Jurassic and one in Late Cretaceous (Curtis and others, 1958, p. 5-10). All these rocks are overlain by patches and sinuous deposits of interbedded stream gravels and rhyolite, andesite, and basalt flows.

The Mother Lode gold deposits probably were formed during the final stages of the intrusion of the Sierra Nevada batholith (Knopf, 1929, p. 48).

The gold deposits of the Mother Lode are associated with a zone of reverse faulting that is parallel in general to the northwesterly trend of the Calaveras and Mariposa Formations but locally cuts all rock types of both formations. Ore bodies are of two general types - quartz veins and mineralized country rock (Knopf, 1929, p. 23).

The quartz veins are large tabular masses of quartz that strike northwest and dip northeast. Though they appear to be locally conformable with the country rock at the surface, the veins cut across various units of the country rock along the strike and down the dip. Individual veins, as much as 50 feet thick and a few thousand feet long, are localized in systems of parallel or subparallel lenses with blunt ends, some of which fray out into stringers.

The vein mineralogy is simple. Milky quartz, the predominant veinfilling, is characteristically ribboned, different layers having been deposited at different times. A small amount of sulfides, mostly pyrite, accompanies the quartz (Knopf, 1929, p. 27). Gold occurs in the free state, commonly in steeply pitching shoots where the veins bulge or at vein junctions and in stringer lodes. The gold is interstitial with the quartz and the sulfides.

The ore bodies in country rock are of diverse types, but the mineralized greenstone, known as gray ore, and mineralized schists are the most productive. The mineralized greenstone is composed of ankerite, sericite, albite, quartz, and 3 to 4 percent pyrite and arsenopyrite (Knopf, 1929, p. 33). It is interlaced with veinlets of quartz, ankerite, and albite. Gold is intergrown with the sulfides or is interstitial with quartz. The mineralized schist ore bodies are composed chiefly of ankerite and subordinate sericite, pyrite, quartz, and albite (Knopf, 1929, p. 34). Free gold is associated with pyrite.

Flanking the main vein system of the Mother Lode on the east and west are two additional zones of mineralization known as the East Belt and West Belt. These belts are shorter and less continuous than the Mother Lode and may be separated from it by 5 to 15 miles of unmineralized country rock (Julihn and Horton, 1938, p. 4) ; nevertheless, they are similar to it genetically and mineralogically and many authors have considered them as part of the Mother Lode.

In production reporting, however, the East Belt and West Belt have been considered as being districts separate from the Mother Lode; so to avoid confusion, this distinction is also made in this report.

Gold deposits are not confined to the Mother Lode area, for of the 58 counties in California, significant quantities of gold have been mined in 41. Production data for the counties are fairly complete since 1880, but for many individual districts they are spotty and fragmentary, even though many such districts have had substantial production.

In the publications of the U.S. Bureau of Mines (1925-34; 1933-66) and U.S. Geological Survey (1904-24) production data for several counties or districts frequently are combined or listed as unapportioned to conceal production of a specific company. Thus in this report the production totals for counties and districts are minimum figures.