Location
The North Bloomfield mining district is in north-central Nevada County about 10 miles northeast of Nevada City. This district also includes the "diggings" at Lake City to the west, Derbec to the north, and Relief to the east.

History
Gold was discovered here originally in 1851. Hydraulic mining began about 1853 and, by 1855, had become a major industry. An extensive system of ditches and flumes supplied water to the mines from Bowman Lake and other reservoirs to the east in the high Sierra Nevada. The town of North Bloomfield was first known as Humbug City. Its name was changed to Bloomfield and then to North Bloomfield when someone discovered there was a Bloomfield in Sonoma County.

As more and more gold-bearing gravel was excavated, the hydraulic pits here became enormous. The pit at the famous Malakoff mine is more than 7000 feet long, 3000 feet wide, and up to 600 feet deep. The tailings from the hydraulic operations were allowed to flow into the rivers, a procedure that led to litigation with the farmers who lived downstream. In a famous court case in 1884 (Woodruff vs. North Bloomfield Gravel Mining Company (16 Fed. Rep. 25)), Judge Lorenzo Sawyer issued an injunction against the dumping of mine debris into the Sacramento and San Joaquin Rivers and their tributaries. Injunctions against other mines soon followed, and hydraulic mining in the Sierra Nevada has not been imporrant since that date. The Malakoff diggings and part of the old town are now a state park. The U. S. Geological Survey, beginning in 1966, initiated an exploration program in this area to determine the extent of unmined gravels. Drilling and geophysical exploration have been done.

Geology
The main channel of the Tertiary Yuba River entered this district from the northeast via Derbee. A branch joined this channel from Relief Hill to the southeast. At North Bloomfield the main channel curves west and north and then west again as it continued toward the North Columbia district. Although the gravels are as much as 600 feet thick, most of the values were obtained from the lower 130 feet of blue gravel. These gravels yielded from four to 10 cents of gold per cubic yard. Bedrock consists of slate, schist, and phyllite. 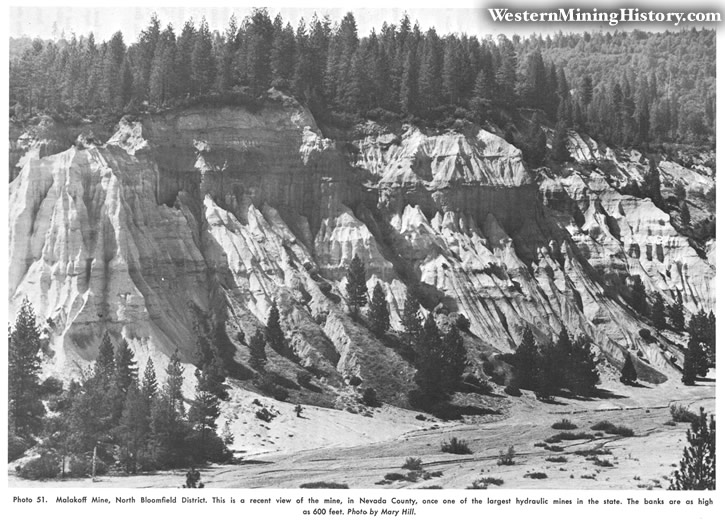