Related: Where to Find Gold in Arizona

Gold mining in Arizona did not start to any appreciable extent until after the acquisition of the territory by the United States from Mexico in 1848 and 1853. What little mining was done by the Spanish and Mexican miners was for silver. A little placer gold was brought in to the churches by Indian converts from the dry working of gravels in the desert, but no systematic mining was done.

After the final occupation of Arizona in 1853, the only accessible part of the Territory was that around the old Mexican settlements of Tucson and Tubac. Considerable prospecting was done in this part of the Territory by American prospectors, and several silver mines and one copper mine were opened, but little or no gold mining was done. On the outbreak of the Civil War, the withdrawal of troops opened the door to Apache raids, and all mining ceased.

During the Civil War, prospectors entered the Territory with the California troops, and several exploring parties were organized to hunt for gold in the central part of the State, hitherto an unknown wilderness dominated by Apaches. Rich placers Were found near the Colorado River at Gila City, La Paz, and Quartzsite, and soon after the Rich Hill, Lynx Creek, Hassayampa, and Big Bug placers in the Bradshaw Mountains of central Arizona were discovered. Base metal mines and even silver mines were not sought, as only gold could be mined at a profit from this inaccessible and hazardous corner of the world. After the richer parts of the placers were exhausted, gold ledges were located and worked in the crudest manner. Most of the free-milling ore proved supeficial. Only one large deposit, the Vulture, Was exploited on a large scale.

At the end of the Civil War, troops were again withdrawn, resulting in ten years of chaos and bloody warfare With the Apaches. Little mining was done except around Prescott and Wickenburg where some protection was given by troops guarding Prescott, then the capital of the Territory.

Finally, in 1872, large reservations were set aside for the Indians and the first truce was declared. The country was then enjoying the post-Civil War period of high commodity prices. Gold was relatively low in price as compared with silver and copper. Prospecting for these two metals, on the establishment of peace with the Indians, took precedence over gold, resulting, in the succeeding ten years, in the discovery and exploitation of rich silver mines in the Bradshaws, Silver King, Signal, Globe, and Tombstone. This silver boom was followed after the completion of the two transcontinental railroads in 1881 by the discovery and early exploitation of nearly every copper deposit in the Territory.

From 1884 to 1893 the country Went through a severe deflation of commodity values. The copper and silver markets fell rapidly resulting in a relative rise in the price of gold. On the demonitization of silver in 1893, practically all silver mining ceased, and only the richest and largest copper mines continued to operate.

From 1893 to 1900, miners from all the old silver camps of the West again turned to the Search for gold, which resulted in Arizona in the discovery of numerous new gold deposits, more notably the Congress and Octave in the Bradshaw Mountains, the Mammoth north of Tucson, and the rich Harqua Hala, La Fortuna, and King of Arizona mines in the desert of Yuma County. The development of the cyanide process and of better concentration methods encouraged the reopening of numerous old mines near Prescott and the exploitation of the deeper base ore.

Towards the end of the nineteenth century, the long period of stagnation ended and commodity prices again turned upwards. Gold mining became less attractive, and the miners in Arizona turned their attention to copper. From 1900 until the business Collapse of 1929 and 1930, gold mining was subordinate to base metal mining. The only exceptions were the discovery and exploitation of the rich vein deposits of the Gold Road, Tom Reed, United Eastern, and others, in the Oatman district. Gold mining also continued on a reduced scale in the older rnines of the Bradshaw Mountains and in those of Yurna County.

On the collapse of Commodity prices in 1930, miners again turned their attention to gold. The first result was the search for new placers and the reworking of old fields, with indifferent results. The higher gold prices that were established by the United States in 1933 have revived activity in most of the old gold camps and stimulated prospecting throughout the State. In 1933, production was about 12 per cent greater than in 1932.

Arizona has produced more non-ferrous metallic wealth than any state or territory in the Union. While most of this production has been in copper, nearly every copper mining operation in the state has yielded important quantities of gold.

As a gold producer, Arizona ranks seventh in the United States. In the following table, the Arizona gold production is shown segregated as to its source. As is seen, about 40 per cent has come as a by-product of copper and lead mining, chiefly after 1900. 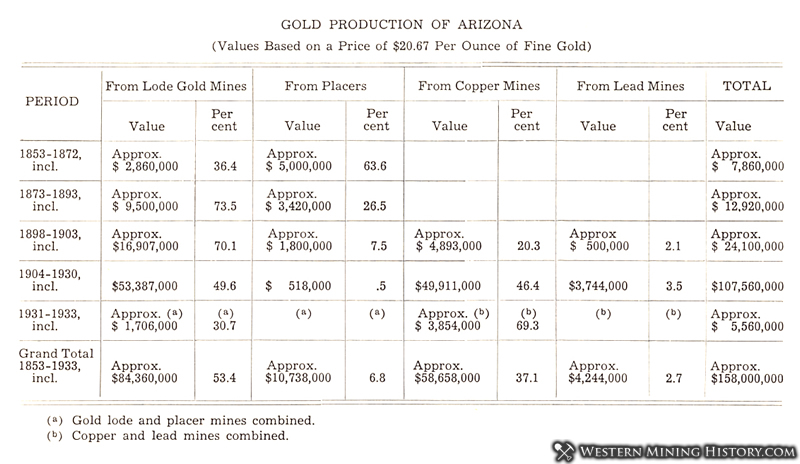 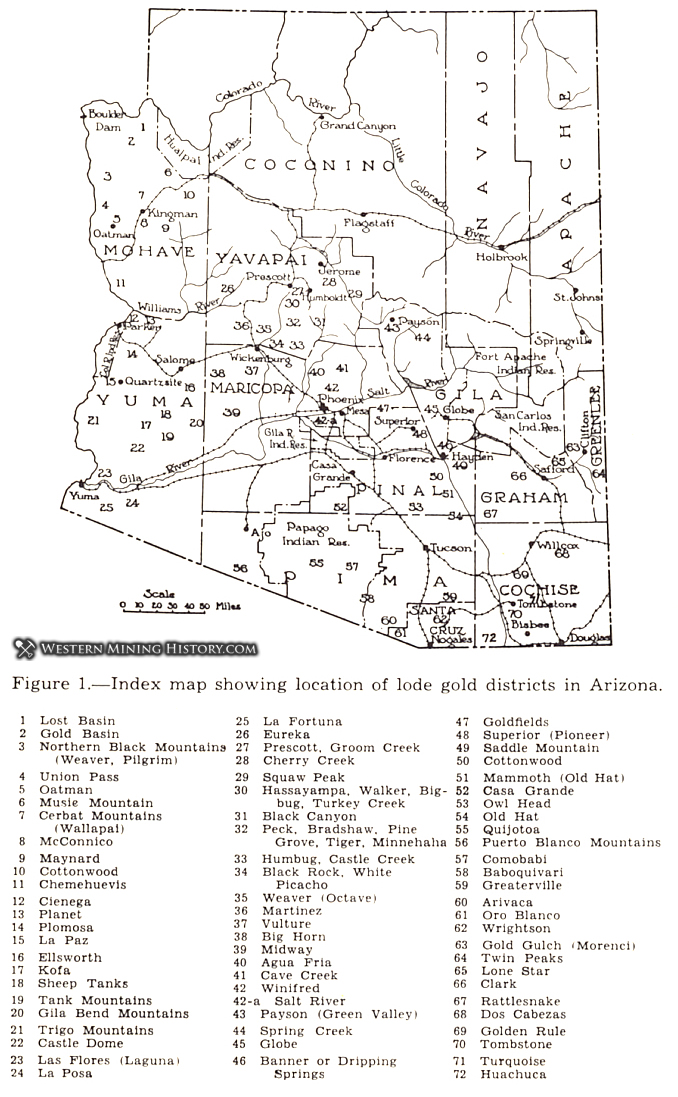