Extending along the foothills of the west slope of the Sierra Nevada from Butte County on the north to Fresno County on the south is a discontinuous belt of copper and zinc mineralization. This belt also has been the source of substantial amounts of gold. Gold-bearing gossans in the oxidized zones overlying the copper-zinc deposits were mined during the gold rush. Later, during the copper "booms" of the Civil War and World Wars I and II, considerable amounts of gold were recovered as a by-product. During the 1930s a few gossan deposits in this belt were again mined for gold.

The primary copper and zinc deposits consist of lenticular sulfide bodies in zones of alteration in greenstones and various types of schists. The ore bodies contain abundant pyrite with associated chalcopyrite, sphalerite and some gold and silver. Most of the ore contains only a small fraction of an ounce of gold per ton, but a few ore bodies have yielded as much as one ounce of gold per ton. Also present are galena, bornite, tetrahedrite, covellite, and chalcocite.

Considerable by-product gold has been recovered from copper mines in northeastern Plumas County, the principal sources having been the Walker, Engels, and Superior mines. However, few production figures are available, so the total gold output of these mines is unknown. In 1931, the Walker mine was the source of 432,000 tons of copper are that had an average gold content of .05 ounces per ton. At the Walker mine, the are bodies consist of wide chalcopyrite-bearing quartz veins in schist and hornfels near granitic rocks. At the Engels and Superior mines, the are bodies are bands of chalcopyrite and bornite in sheared granitic rocks. 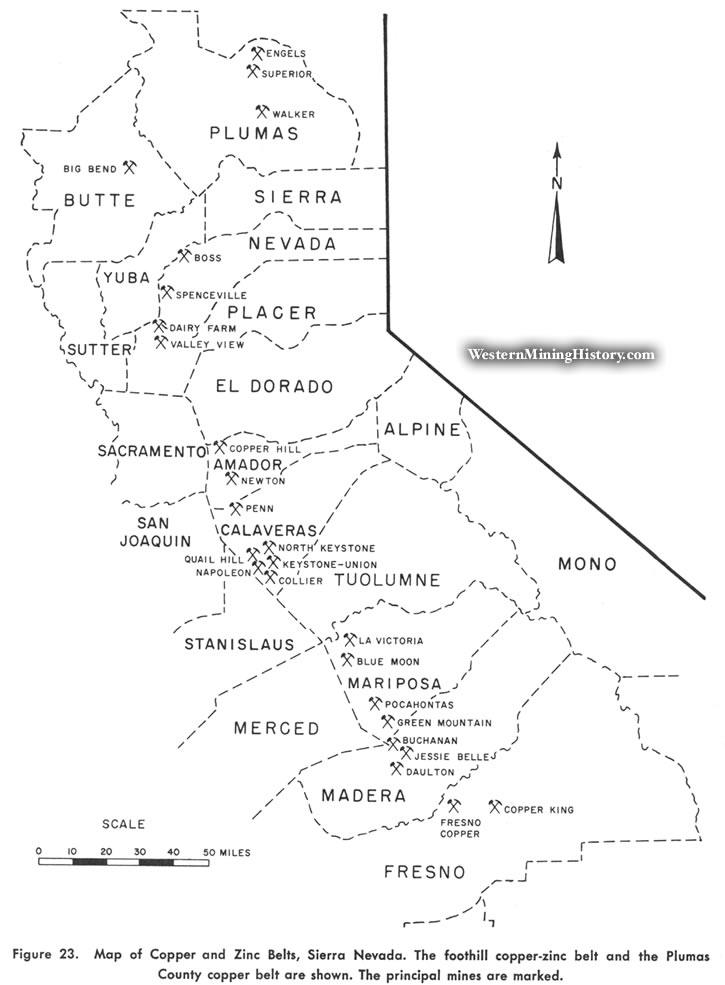