In the upper Trinity River area, the principal sources of gold have been the Carrville and Trinity Center districts. At Carrville the river was dredged until comparatively recently. Among several important lode-gold mines here, the most productive have been the Trinity Bonanza King with a total output valued at $ 1.2 5 million and the Headlight, which has yielded $500,000. The gold-quartz veins occur in slate and greenstone, but granitic bodies are nearby. Coffee Creek, an important tributary, enters the area from the west. This creek was placer-mined for many years, and several high-grade quartz mines near its headwaters produced gold.

The Trinity River and adjoining terraces were extensively mined in the Eastman Gulch and Lewiston districts. One of the better-known lode mines was the Venecia mine. The gold-quartz veins at this mine have yielded more than $500,000. In the Lewiston and Douglas City districts, the river makes a number of extremely sharp bends that have formed several wide river bars, particularly at Starvation Flat near the town of Lewiston and at Gold Bar. The Douglas City area was extremely rich in the early days where the highly productive Weaver, Indian, and Reading Creeks empty into the Trinity River. 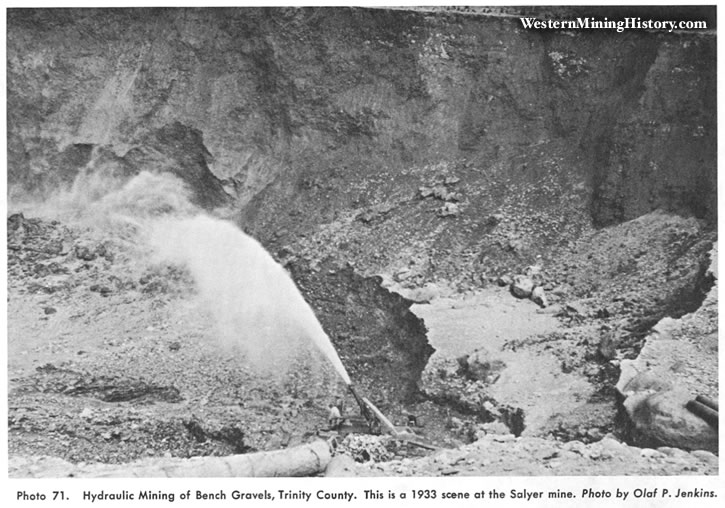 Downstream, in the Junction City district, the river swings to the north and then west. The river has been dredged for a distance of at least eight miles here. The bench gravels are extensive and thick, and some of the hydraulicked banks are several hundred feet high. The largest bench deposits are at Coopers Bar, Hocker Flat, Benjamin Flat, and Chapman Ranch. Canyon Creek and Oregon Gulch flow into the river at Junction City, and the North and East Forks, at Helena. Moderate amounts of older gravels exist at Big Bar to the northwest.

Hayfork, which is about 15 miles southwest of Junction City, is a branch of the South Fork of the Trinity River. Most of the gold recovered in Hayfork Valley has been by dragline dredging, upstream in Hayfork Gulch, by hydraulicking. A number of narrow but often rich gold-quartz veins are found in slate and related rocks in the mountains just south of Hayfork. These include the recently active Kelly mine.

From Big Bar the main channel of the Trinity River flows in a northwesterly direction through the Burnt Ranch and Salyer districts. The highly productive New River, which drains the Denny district to the northeast, enters the Trinity River here (see section on New River-Denny district). At both Hawkins Bar and Salyer are bench gravels high above the present streams. Beyond Salyer the Trinity River is joined by the South Fork, and from this junction the river flows northerly through Willow Creek and Hoopa, site of the recently active Copper Bluff copper-gold mine. The Trinity River then continues on to Weitchpec, where it empties into the Klamath River. 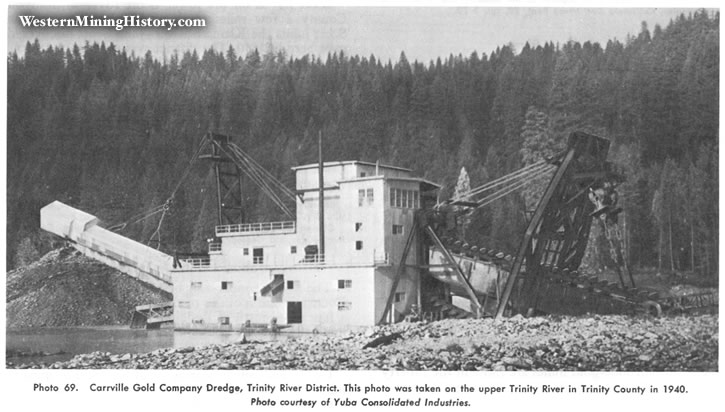 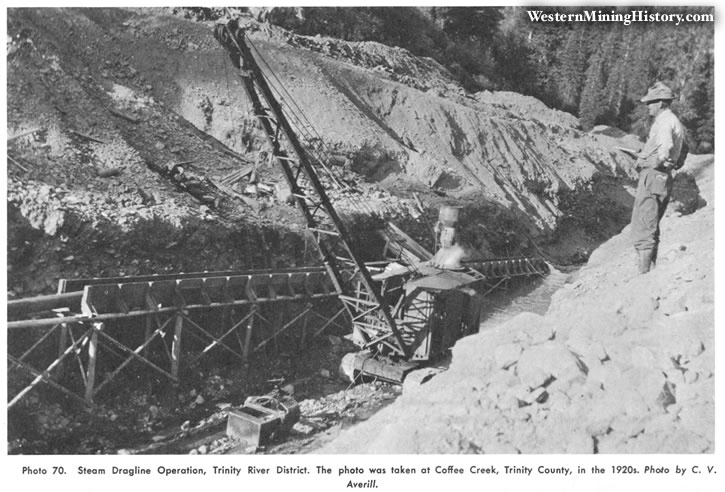