Location
The Picacho district is in southeastern Imperial County about 50 miles east of El Centro and 20 miles north of Yuma, arizona. The Colorado River is on the north side of the district, and the Chocolate Mountains extend along the southwest margin. The district was named for Picacho Peak, a prominent landmark in the area.

History
Spaniards, developing the nearby Cargo Muchacho and Potholes districts, probably mined the Picacho district as early as 1780. For many years, Mexicans and Indians mined the area by small-scale dry washing methods. Small hand-operated bellows-type washers were employed, or ,winnowing was done with blankets. Virtually every dry wash in the region was worked in this fashion, and many small tailings piles from these operations are still visible. Attempts were made to hydraulic the area during the 1890s.

The Picacho or Picacho Basin mine, the largest source of gold in the district, was worked on a large scale from 1904 to 1910. The reported output was $2 million. During this operation the ore was treated in a mill near the Colorado River. The mine was sampled in the 1930s, but there has been only minor prospecting in the district since, and the site of the old town of Picacho on the river was recently made into a state recreation area. 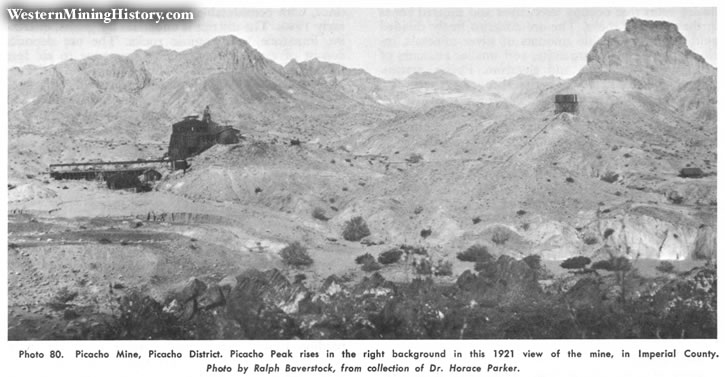 Geology
The central part of the district, which is in a shallow basin, is underlain by interbedded granitic rocks and mica and hornblende schists. A number of diorite dikes may be associated with the gold mineralization. The ridges surrounding the basin and Picacho Peak are composed of andesite, rhyolite, and rhyolite tuff.

Ore Deposits
The ore deposits consist of parallel thin gold-bearing stringers in schist. Although the ore bodies at the Picacho mine contained only a few dollars of gold per ton, several were quite large. The last ore shoot worked at this mine was 250 feet long and 160 feet wide. The placer deposits in the various dry washes usually were shallow and discontinuous. The gold particles were very fine. 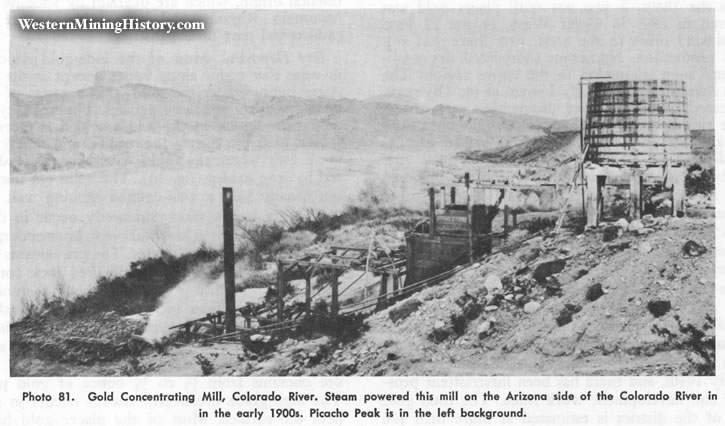