This article was originally posted in the forums on May 18, 2008 by D E Russell

WHEN, a few years ago, the writer of this article found in the French journals an account of a new application of the diamond, namely, for boring rocks, and gave to an American newspaper a translation of it, which went the rounds of the whole press of the United States, the story was disbelieved by many, and was thought absurd and extravagant. It was indeed known that glaziers use diamonds to cut glass, and that engravers on glass and precious stones employ them; but to use diamonds to bore in common rock, instead of the usual large steel punches and drills, was supposed by some to be the height of foolishness.

But the economical superiority of diamond drills over all others, even in rock drilling, however improbable at first sight, has now been perfectly established; and since the first application of the principle by M. Leschot, of Paris, France, in 1860, their use has extended over all the civilized world, in boring for blasting, for building purposes, rail road tunneling, quarrying, mining, etc. and the first surprise has given way to the conviction that, as the black diamonds are the hardest substance known, and easily cut the hardest gems, such as onyx, sapphire, etc., and even more recently have been employed for dressing the very hard burr mill stones, it was necessary only to apply them properly in order to overcome the resistance of the hardest rock which is met with in these larger operations.

The system of application is to place the diamonds, with the cutting edges forward, on the annular end of a hollow cylindrical tube, and to give this tube a very rapid rotation around its axis, at the same time injecting forcibly a stream of water through the hollow tube, with the triple benefit of moistening and softening the stone, preventing the diamond points from becoming over heated by friction, and removing the pulverized rock formed by the attrition of the diamonds as fast as it is formed. In this way the whole of the rock in the bore hole is not cut out. Only an annular hole or groove is made, in the centre of which is a solid cylinder, which enter the tube during the boring, and afterward is easily broken off and extracted, when the boring is finished, or, if desired, may be partially removed during the process.

The progress of the boring depends, of course, on the character of the rock. In the hardest granite or flint it is five feet per hour; in softer kinds, such as sandstone, limestone, shale, or slate, fifteen feet per hour. This velocity depends also on the speed of the rotation. The diamonds cut in the hardest rock 1/400th of an inch per revolution, and the feed (that is, the advance of the borer) is made one inch for every 400 revolutions. If these are made in one minute, the feed is one inch per minute, and therefore 60 inches, or five feet, per hour. If however the machine is run at 1000 revolutions per minute, the feed is one inch per 24 seconds and therefore 150 inches, or 12.5 feet per hour. For softer material, the feed is made an inch for every 200 revolutions, and therefore the boring reaches twice the depth in the same time. These variations can of course easily be made by changes of gearing. To explain this, we will describe the apparatus as now improved, patented in Europe and in this country, and manufactured by Messrs. Severance & Holt, 10 Wall Street, New York. Without it many enterprises, such as the Mont Cenis tunnel, and several others where the diamond drill is now used, probably either would have been given up, or the time of completion would have been prolonged to a very disadvantageous period in the future.

The drill most commonly used, and called "Prospecting Drill No. 1," because of its general usefulness in testing the character and value of mines and quarries, consists of a small, upright boiler, to one side of which is firmly bolted the cast iron frame which sup ports the engine and swivel drill head, gears and screw shaft, B, with drill passing through it. This shaft is made of hydraulic pipe from five to seven feet in length, with a coarse thread cut on the outside. This thread runs the entire length of the shaft, which also carries a spline by which it is feathered to its upper sleeve gear. This gear is double, and connects by its lower teeth with the beveled driving gear, and by its upper teeth with the release gear, E. This release gear is feathered to the feed shaft F, at the bottom of which is a frictional gear fitting the lower gear on the screw shaft, which has one or more teeth less than the frictional gear, whereby a differential feed is produced. This frictional gear is attached to bottom of feed shaft, F, by a friction nut, thus producing a combined differential and frictional feed, which renders the drill perfectly sensitive to the character of the rock through which it is passing, and maintains a uniform pressure upon the same. The severe and sudden strain upon the cutting points incidental to drilling through soft into hard rock with a positive feed is thus avoided. The drill proper (passing through the screw shaft, B) consists of a tubular boring bar, made of lap weld pipe, with a steel bit or boring head, D, screwed on to one end. This bit is a steel thimble about four inches in length, having three rows of black diamonds in their natural rough state firmly imbedded therein, so that the edges of these in one row project forward from its face, while the edges of those in the other two rows project from the outer and inner peripheries respectively. The diamonds of the first mentioned row cut the path of the drill, in its forward progress. while those upon the outer and inner periphery of the tool enlarge the cavity around the same, and admit the free ingress and egress of the water.

Inside the bit, D, is placed a self adjusting wedge. which allows the core to pass up into the drill without hinderance, but which impinges upon and holds it fast when the action of the drill is reversed thus breaking it off at the bottom and bringing it to the surface when the drill is withdrawn. In order to withdraw the drill, it is only necessary to throw out the release gear, E, by sliding it up the feed shaft, F, to which it is feathered, when the drill runs up with the same motion of the engine which carried it down, but with a velocity sixty times greater; that is, the speed with which the drill leaves the rock, bringing the core with it, is to the speed with which it penetrates it as sixty to one the revolving velocity in both cases being the same. The drill rod may be extended to any desirable length by simply adding fresh pieces of pipe. Common gas pipe is found to serve admirably for this purpose, the successive lengths being quickly coupled together by an inside coupling four inches long, with a hole through the centre of each to admit the water. The drill is held firmly in its place by the chuck, G, at bottom of screw shaft. The small steam pump, C C, is connected by rubber hose with any convenient stream or reservoir of water, and also with the outer end of the drill pipe by a similar hose having a swivel joint, as shown in the cut. Through this hose a quarter inch stream of water is forced by the pump into the drill, from which it escapes between the diamond teeth at the bottom of the bit, D, and passes rapidly out of the bole at the surface of the rock, carrying away all the grit and borings as fast as produced. Where water is scarce or difficult of access, a spout is laid from the mouth of the hole to the tank or reservoir and a strainer attached to the connecting hose, so that the same water may be used over and over again with but little loss. 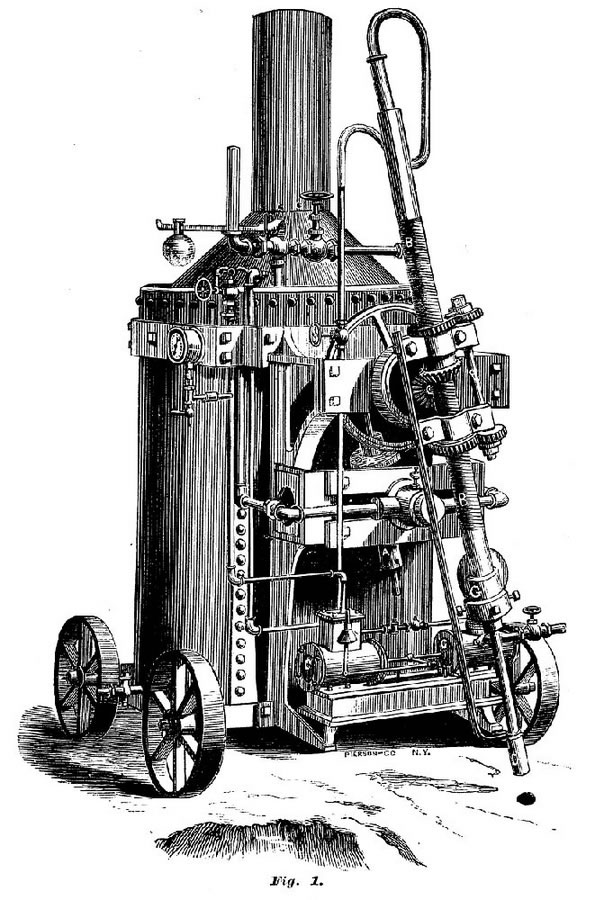