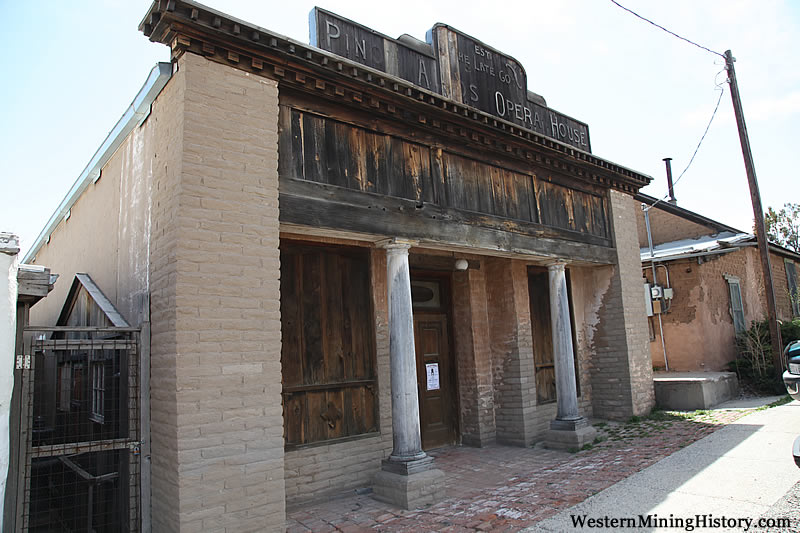 Historic Pinos Altos (Spanish for 'tall pines') is a very old mining town; it was Grant County's first county seat. The town site is located along the Continental Divide at an elevation of 7,000 feet in the southern end of the Pinos Altos Mountains of the Gila National Forest.

The town began in 1860 when three frustrated 49ers, Thomas Birch, Colonel Snively and another guy named Hicks, stopped to take a drink in Bear Creek and discovered gold. Word spread like wildfire, soon there were over 700 men prospecting in the area. There were conflicts between the miners and the Indians.

Pinos Altos' history includes the Apache War of September 22, 1861, where Cochise joined the 400 strong Chiricahua Apaches under Mangas Coloradas to drive away miners from their traditional homeland. Captain Thomas Marston, Arizona Scout, and many others on both sides died in this battle.

Roy Bean operated a mercantile here in the 1860s before moving to West Texas to gain fame as Judge Roy Bean "The Law West of the Pecos."

The area surrounding Pinos Altos has a rich history of ranching where some of the largest ranches in the country once were located not far from town. Take a drive and you'll see evidence of ranching all around: windmills, stock tanks, and corrals. The cowboys, though, often work far from the road. When you see one, you're seeing someone with one foot in the past, the other in the present and completely steeped in the traditions that helped settle the West.

Today, P.A. (as it is known by locals) has a charming main street that feels like an old western movie set. Many of the old buildings date back to the 1800s and have been restored with original memorabilia and artifacts. It has a population of 300.