Published in the 2016 Mining History Journal
By Larry Godwin

Note: this article was previously in two parts but has now been consolidated into this one document.

Silver Lake, which early settlers called Arrastra Lake, lies in a basin at the head of Arrastra Creek, four miles southeast of Silverton, Colorado, near the center of the Las Animas Mining District, in what was then part of La Plata County. 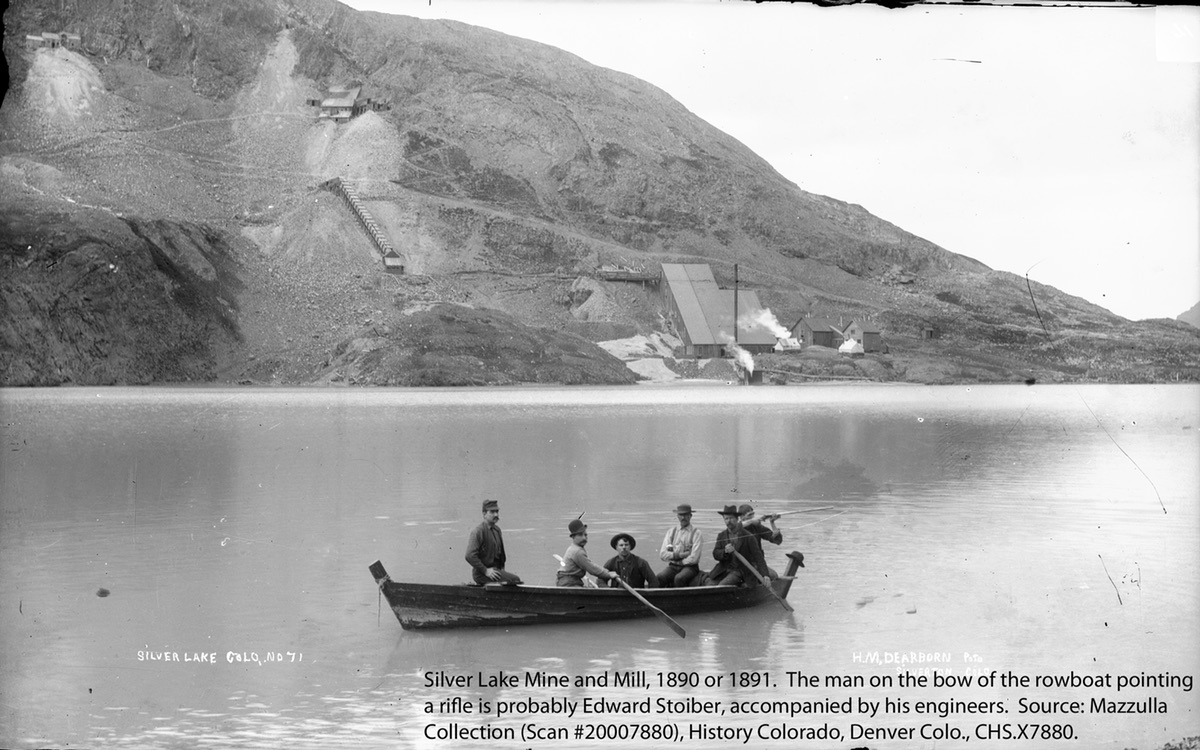 On June 15, 1871, prospectors created the Las Animas Mining District as a primitive form of frontier government to regulate claim activity throughout the vast Animas River drainage.1 During its first several years, explorers on the floor of Arrastra2 Gulch must have gazed up and south at the imposing headwall and wondered what lay beyond. Snow and ice locked in the precipice for all but a few months each year, discouraging exploration.

In 1875 a handful of independent explorers made the dangerous ascent into the upper reaches of Arrastra Basin. The following year, John Reed became the first documented prospector to scout a route up the headwall. On the other side, he found a hanging valley carved by glaciers, between North Star and other summits to the east and Kendall Peak and Round Mountain to the west. Their flanks, with 1,000 feet of relief, were sheer and rugged, and the mountaintops presented a lacework of veins and dykes. At the valley’s center lay what was at that time a pristine glacial lake, about 40 acres in size, surrounded on most sides by exposed bedrock,3 with its outflow cascading northward until it roared over the valley’s craggy headwall into Arrastra Gulch.4

Examining the flank of Round Mountain on the valley’s west side, Reed quickly found several veins that carried silver, lead, and copper. He staked two claims on Round Mountain, which he named the Whale and the Round Mountain, as well as a third, the Silver Lake, on the northwest side of the lake.5

Also in 1876 an unknown prospector working at the hanging valley’s head identified a huge fault up Arrastra Gulch just south of the lake and traced it southwest, where it disclosed a vein he claimed as the Buckeye. During that summer, both he and Reed excavated shallow workings to prove ore and retain title to their properties, then left for the season. When the men returned the following year, Silver Lake Basin, as the valley came to be known, saw its first production, which the owners shipped by burro to the Greene Smelter just north of Silverton.6 However, the volume of payrock was insignificant considering the arduous and perilous approach, which hindered Reed and the other prospector from packing much out and from importing any beyond the most essential materials, limiting output.7

That year also saw Jonathan Crooke and his brother, Lewis,8 purchase the Royal Tiger claim9 on the southeast side of Silver Lake, which they began working in 1877. In 1878 they sold a controlling interest to McPherson Lemoyne. Meanwhile the original miners labored on the Buckeye for approximately three years and, although they had not exhausted the vein, that holding fell silent around 1879.10

Silver Lake Basin pulsed with activity in 1881. A few other prospectors made the hazardous ascent into the cirque, where they examined the east flank of Kendall Peak a short distance south of Reed’s ground. After climbing rock cornices,11 they found a rich vein directly west across the lake from the Royal Tiger,12 staked it with the Iowa and Stag claims, and blasted a tunnel and shaft to explore the lode at depth. At the end of the season, the party had samples assayed in Silverton. The report found the ore was rich not only with silver and industrial metals but also gold. The next year the group returned and began production. The members persuaded a crew of ten or so miners to make the sheer cliff at the Iowa their home for the working season and carried up all the supplies and lumber necessary to build a basic surface plant.13

By 1881 early prospectors had claimed the four significant properties in Silver Lake Basin: the Silver Lake, the Buckeye, the Royal Tiger, and the Iowa. 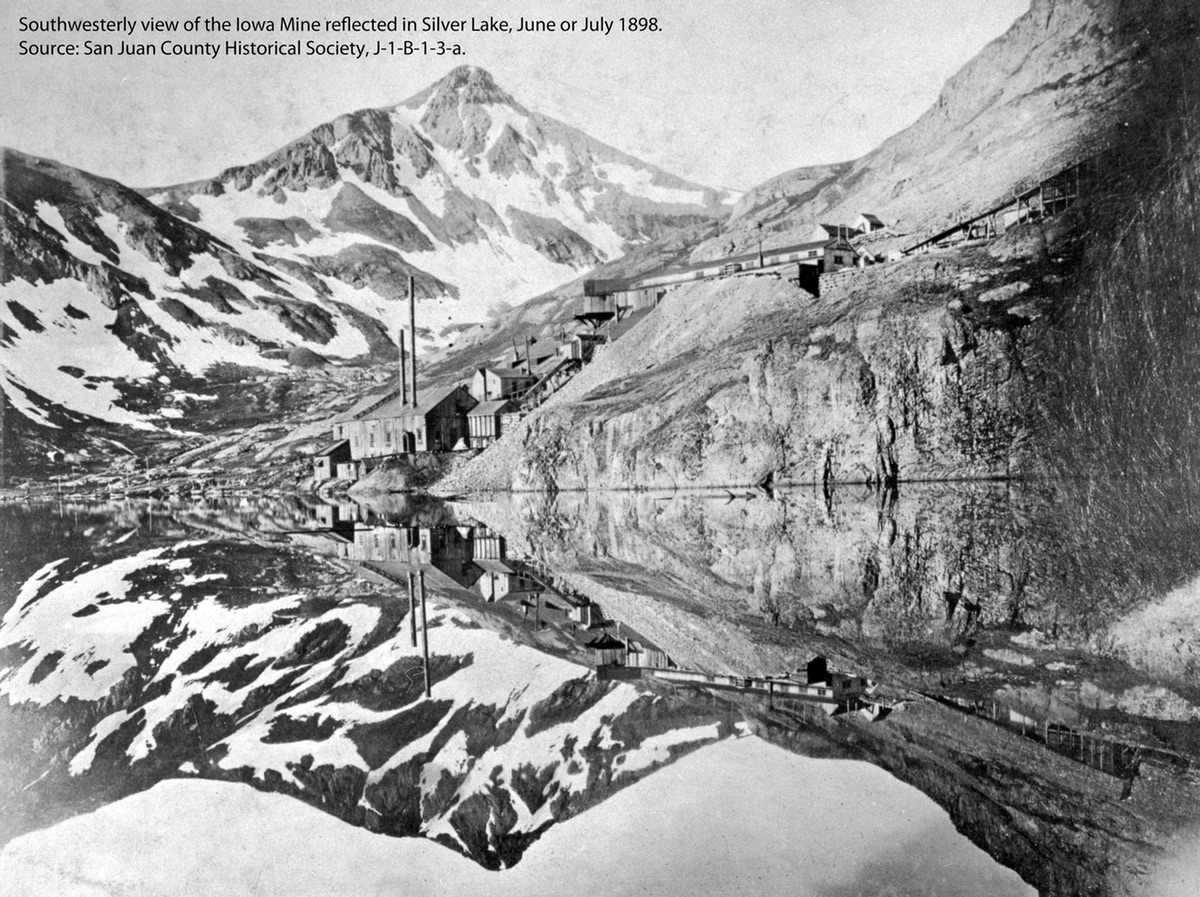 While the Iowa miners acclimated, John Reed toiled on his adjoining Silver Lake real estate a short distance to the north. During 1880 and 1881, he traced the Silver Lake vein for a considerable distance with shallow excavations hewed into solid bedrock. In the short working season of 1882 he generated several tons of ore from a tunnel he drove at a snail-like pace directly on the vein for a distance of around fifty feet. Remaining in the basin for the winter, with its heavy snows, would constitute a life-threatening event, forcing him and other miners down each autumn.14

During a stay in Silverton in 1883, Reed convinced John W. Collins that his Silver Lake and Round Mountain claims would pay well, if worked, but they required additional investment. For a share of the Silver Lake, Collins joined Reed to form a partnership, and that summer the men scrambled into the basin to resume production. They packed in enough lumber and equipment to build a small blacksmith shop and cabin, and hired three or four miners to begin a second tunnel. Once they reached the vein, the party extracted more or less five tons of material per day and hauled it down to Sweet’s Sampler15 in Silverton.16

About that time, on the east side of the basin, Julius Johnson cut a tunnel deep into the Royal Tiger claim. An old-time prospector, he had leased the property from McPherson Lemoyne. His contract ended in roughly 1883, when Lemoyne sold the Royal Tiger to Edward Innis, who hoped to approach his fabled lake of gold from the opposite side of King Solomon Mountain should his Highland Mary Mine, located at the east end of Royal Tiger Basin, fail to make a discovery.17

However, by 1885 activity in Silver Lake Basin had slowed, probably due to the national recession that began in March 1882 and lasted until May 1885, coupled with difficulties the extreme terrain posed. Reed and Collins stopped work at the Silver Lake Mine, and around that year the Iowa also became idle. The Royal Tiger remained the only active operation.18

Otto Mears, wagon-road and railroad magnate known as the Pathfinder of the San Juan, initiated his interest in the mining industry in 1886 by leasing the Buckeye, which had been dormant since around 1879. He constructed the best surface plant in the basin to sustain a crew of ten in order to produce all year long. Relative to the era, the Buckeye Mining Company was progressive, boasting a ventilation blower that forced air underground and warming boxes so miners could thaw frozen dynamite prior to use. The mine worked at full capacity in 1887 but two years later, Mears quit his contract and closed the property.19

In 1888 Benjamin W. Thayer and James H. Robin examined the Iowa Mine, located a few hundred feet above lake level directly south of the Silver Lake. They found a vein that offered an unusual combination of gold, silver, and galena, the principal ore of lead. The partners leased the ground the following year, began production, and benefited when Congress passed the Sherman Silver Purchase Act of 1890, which required the U.S. government to buy nearly twice as much of that metal as before for coining silver dollars.20 The legislation restored silver’s market price and raised the value of the Iowa’s ore. Thayer and Robin boosted their workforce to expedite development and then discovered a second vein of galena, which ensured greater profits.21