Location
This district is in southwest Calaveras County in the vicinity of the town of Angels Camp and Altaville. It is an important part of the Mother Lode belt and lies between the San Andreas district to the northwest and the Carson Hill district to the southeast. It is both a lode and placer district, but the lode mines have been more productive.

History
The streams in the area were mined shortly after the beginning of the gold rush. The town was founded in 1848 and named for Henry Angel, who had established a trading post here. Rich surface ores were mined in the oxidized zones in the 1850s, and most of the important veins were discovered at that time. By 1885 Angels Camp had become one of the major gold-mining districts in the state. The Utica Mining Company was organized in the middle 1850s, and for the next 40 years the Utica mine was a major source of gold. From 1893 to 1895 this mine yielded more than $4 million worth of gold. All of the major mines were shut down during World War I. There was some activity in the district again during the 19305, and the Calaveras Central and Altaville drift mines have been intermittently prospected during the past 15 years. This district has an estimated total output of at least $30 million, and it may be considerably more.

The colorful jumping frog jubilee held each year at nearby Frogtown, the county fairgrounds, is based on Mark Twain's tale, The Jumping Frog of Calaveras County. He is supposed to have first related the story at the Angels Hotel.

Geology
This district is underlain by a series of northwest-striking beds of amphibolite and chlorite schist, phyllite, greenstone, and metagabbro (see fig. 7). To the east and west are slate, impure quartzite, and micaceous schist. In the north and northeast part of the district is the west and northwest-trending Tertiary Central channel, which is a tributary of the ancestral Calaveras River. The channel gravels are cemented, contain abundant quartz, and are overlain by rhyolite tuff and andesite. 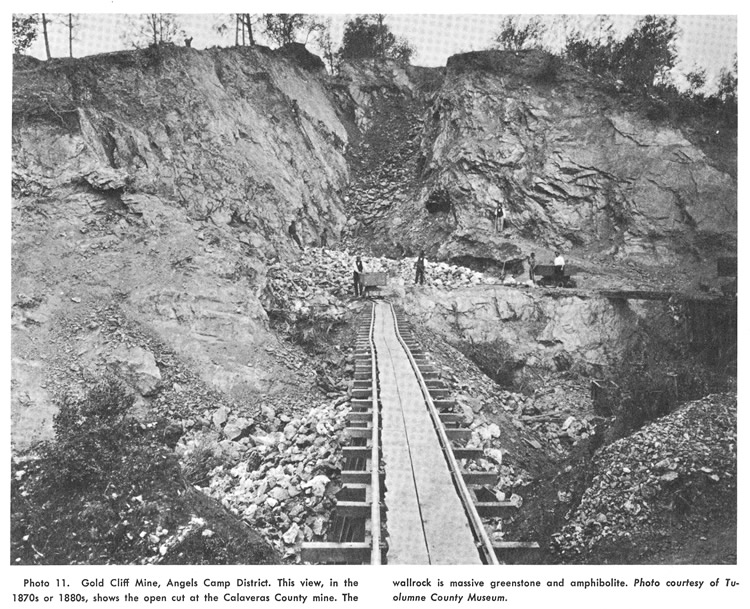 Ore Deposit
The lode deposits consist of massive quartz veins, zones of parallel quartz stringers and bodies of mineralized schist and greenstone. The ore contains disseminated free gold and auriferous pyrite. Usually the gold is in fine particles, although occasional high-grade pockets containing coarse gold have been found. Calcite, talc, ankerite, and sericite, are commonly present in the ore. The milling-grade ore usually averaged 1/7 to 1/5 ounce of gold per ton, but the are bodies were scores of feet in thickness, hundreds of feet in length, and were mined to depths of several thousand feet.

The deposits occur either in the amphibolite and chlorite schist or phyllite. There are three principal vein systems (see fig. 7). In the system on the west the veins are in phyllite. In the center one the veins are along the west margin of a northwest-trending belt of metagabbro. In the eastern system, which contains the famous Utica mine, the ore deposits are in amphibolite and greenstone. 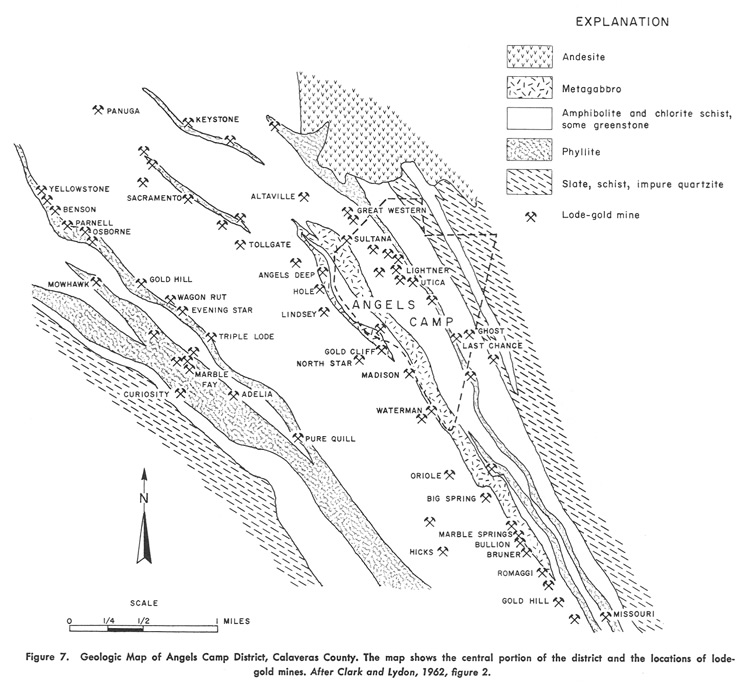 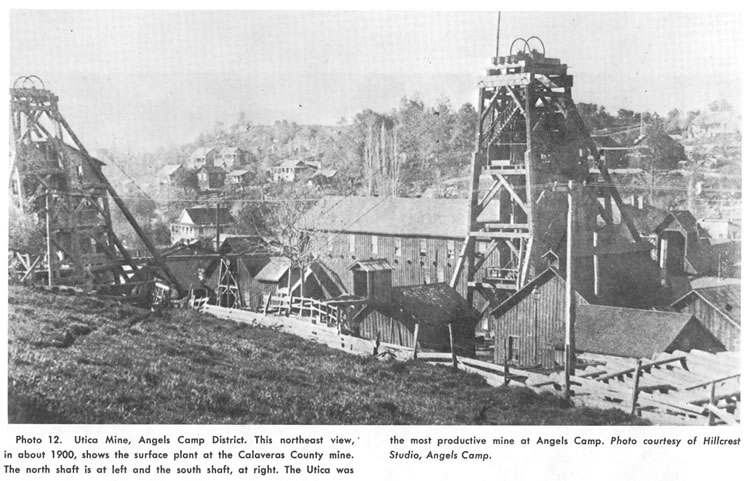