Location
Carson Hill is on the Mother Lode belt in southwestern Calaveras County. The district consists of that portion of the Mother Lode that extends itom Carson Flat southeast through Carson Hill to the town of Melones on the Stanislaus River. It has also been known as the Melones district.

History
Carson Hill was named for James H. Carson, a soldier who came to California in 1847 and who discovered gold at nearby Carson Creek in 1848. Lode gold was first discovered in 1850 at the Morgan mine and many miners soon came to the area. By 1851, the town of Melones had a population of 3,000 to 5,000. It was named for the melon seed-shaped gold nuggets found here. The district was extremely productive then, much of the mineral coming from fantastically rich surface pockets. Gold to the amount of $110,000 was exposed by one blast, and in 1854, a 195-pound mass of gold, the largest ever taken in California, was found here. Telluride minerals were recovered in quantity, but most were lost in unsuccessful attempts to extract the gold.

The gold production from the district declined in the late 1850s. Large-scale mining of low-grade ore bodies began in 1889 at the Calaveras mine. The Melones mine was worked on a major scale from 1895 to 1918. The Morgan, Calaveras, and Melones mines were consolidated in 1918 and worked as a unit until 1926. They were operated again from 1933 until 1942. This was one of the richer portions of the Mother Lode, the Carson Hill group alone having yielded an estimated total of $26 million. Part of Carson Hill will be inundated by the New Melones Reservoir. 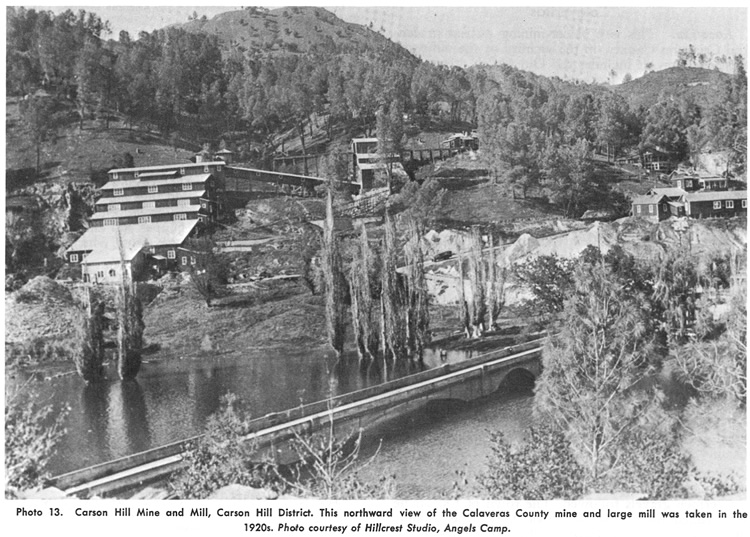