Location
This district is in northeastern Sacramento County. It was mainly a dredging field that extended from the town of Folsom southwest along the south side of the American River to Fair Oaks, south through the town of Natoma to Nimbus and then west to the east border of what is now Mather Air Force Base. The dredged area is approximately 10 miles long in a southwest direction and up to seven miles wide. The Folsom district has also been known as the American River district.

History
The region around Folsom and Mormon Bar was extensively placer-mined during the gold rush, with minor lode mining. The area was originally settled in 1849 and first known as Negro Bar. The present town was laid out in 1855 by T. D. Judah for the Sacramento Valley Railroad and named for Captain J. L. Folsom, quartermaster of Stevenson's Regiment. Numerous Chinese worked the region from the 1860s through the 1890s. A primitive grab-dredger was active at Natoma in 1894. Bucket-line dredging began at Folsom in 1898 and soon became a major industry. Most of the dredging companies were merged into Natomas Consolidated of California in 1908. This firm, later known as the Natomas Company, was the principal operator in the district. The company designed and built its own dredges at extensive shops in the town of Natoma. In 1916, 11 active dredges yielded more than $2 million worth of gold. From 1927 to 1952, several other operators joined Natomas in dredging the district.

Dredging operations were curtailed during World War II but were resumed on a major scale shortly afterward. However, increasing costs, the depletion of dredging ground, and changing land values caused the dredging operations to be gradually curtailed. By 1960 there was only a single active dredge, and this was shut down in Februaty 1962. Large portions of the dredged-over areas are now occupied by defense industries, such as the Aerojet-General Corporation and Douglas Aircraft Company plants, and by housing tracts. Folsom, one of the largest dredging fields in California, has a total output estimated at $125 million. Approximately one billion cubic yards of gravel were dredged by the Natomas Company. 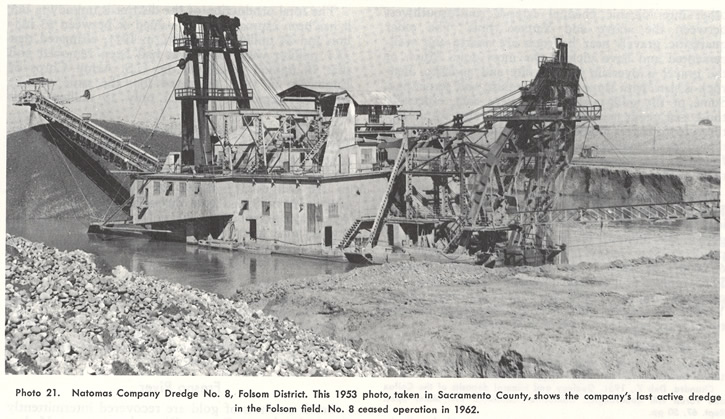