Location
This famous mining district is in western Nevada County in the immediate area of the town of Grass Valley. The Nevada City district adjoins it on the northeast and the Rough-and-Ready district is to the west.

History
Placer gold was first found in Wolf Creek in 1848 shortly after Marshall's discovery at Coloma. The earliest mining was done by David Stump and two companions who came from Oregon. The shallow placers were rich but were exhausted quickly. Gold-bearing quartz was discovered at Gold Hill in 1850 and soon afterward at Ophir, Rich, and Massachusetts Hills. Quartz mining soon developed into a major industry that was to last more than 100 years. The Gold Hill and Allison Ranch were the leading lode mines during the 1850's. Mining was curtailed somewhat during the Comstock rush of 1859-65, but the mines were productive again in the late 1860's. The camp declined in the 1870's, and by 1880 only the Empire and Idaho mines were active. In 1884 the North Star mine was reopened and activities increased; the North Star, Empire, Idaho-Maryland, Pennsylvania, and W.Y.O.D. all were highly productive. By 1900, the Idaho-Maryland mine had yielded a total of $12.5 million. From 1900 to 1925, the North Star and Empire mines were the largest producers, the Idaho-Maryland having been idle in 1901-19. By 1928, the North Star had had a total output valued at $33 million.

In 1929 the Empire and North Star groups were purchased by the Newmont Mining Corporation. This merger, which resulted in the Empire-Star Mines Co., included other important mines, such as the Pennsylvania, W.Y.O.D., and Sultana. From 1930 to 1941, the district was enormously productive. The 1930-40 output of Idaho-Maryland Mines Corp., which included the Idaho-Maryland and Brunswick mines, was $26.7 million. The Empire-Star group yielded 1,074,284 ounces of gold from 1929 to 1940. Nearly 4000 miners were at work in the mines during the 1930s and early 1940s. The mines were shut down during World War II, but the Empire, Pennsylvania, North Star, and Idaho-Maryland reopened soon afterward. However, operations gradually decreased; the Idaho-Maryland stopped gold mining in 1956 and the Empire-Star group in 1957, closures that ended nearly 106 years of gold-mining operations in the Grass Valley district. Some tungsten ore was mined in 1954-57 at the New Brunswick unit of the Idaho-Maryland mine.

Grass Valley was the richest and most famous gold-mining district in California. The value of the total output of the lode mines is estimated to have been at least $300 million, and the placer mines yielded a few million dollars more worth of gold. The two largest operations, the Empire-Star and Idaho-Maryland groups, had total outputs of $130 million and $70 million, respectively. Many famous mining engineers and geologists worked in the Grass Valley district. A number of important inventions and improvements were made in mining and milling equipment in the Grass Valley gold mines. Many of the miners were of Cornish descent and were often known as "Cousin Jacks". For many years the town and the mines were served by the Nevada County Narrow Gauge Railroad, which extended north from Colfax. A few historic mine structures are still standing, but most of the extensive surface plants of the major mines have been dismantled. The old power house at the North Star mine and its 32-foot Pelton wheel are part of a Nevada County historical display. 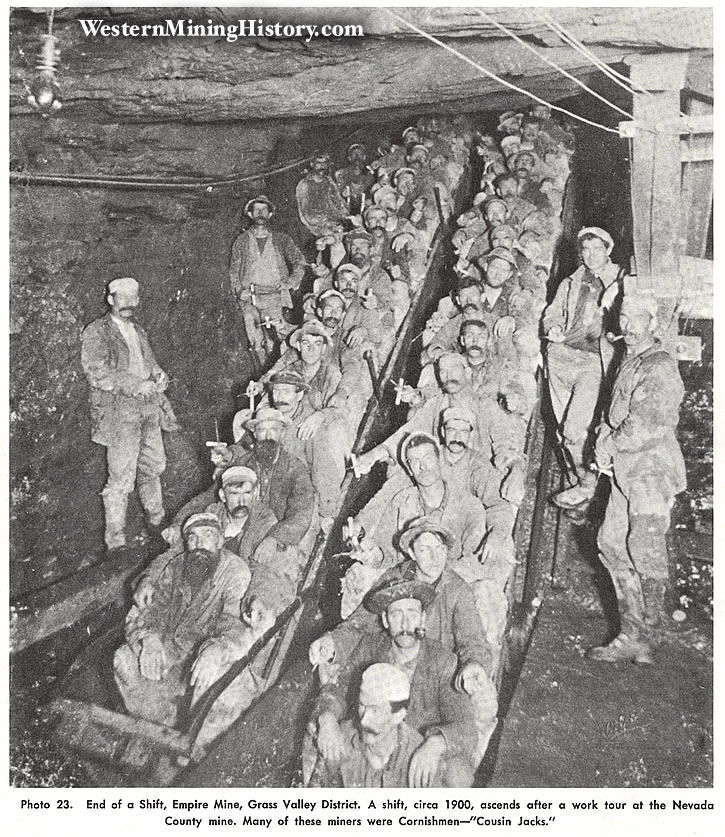 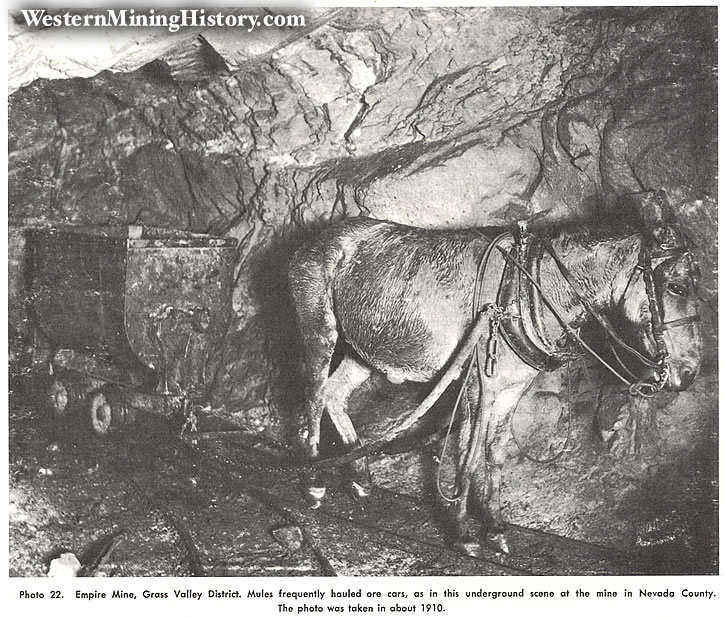