Location
A 20-mile-long belt of gold mineralization runs through western Amador County. On the belt, a portion of the Mother Lode, are the towns of Jackson, Sutter Creek, Amador City, Drytown, and Plymouth. Because of the uniform nature of the gold mineralization along this belt, the several districts and sub-districts have been grouped together here under a Jackson-Plymouth heading.

History
This entire belt was settled early in the gold rush when the streams were placer-mined. Jackson was settled by California Spanish at least as early as 1849. It was first known as Botilleas, but the name was soon changed in honor of Colonel Alden Jackson. Sutter Creek was named for Captain John A. Sutter who visited the region in 1846. Amador City was settled in 1851 and Plymouth in 1852. Drytown flourished from 1848 until 1857 when rich placer deposits were worked. Most of the important lode deposits were discovered during the 1850s. The Argonaut mine was first developed in 1850, the South Spring Hill and Lincoln in 1851, the Plymouth in 1852, the Original Amador and Keystone in 1853, the Central Eureka in 1855 and the Kennedy in 1856. Lode mining developed into a major industry that was to last 90 years.

By 1875 mines such as the Keystone, South Spring Hill, Oneida, Old Eureka, and Plymouth had become large and highly profitable operations. However, the Argonaut, Kennedy, Central Eureka, Bunker Hill, Fremont-Gover, and Lincoln Cons. (Lincoln, Wildman, and Mahoney), major gold sources of a later date, did not become important until the 1880s and 18905. The properties constituting the Plymouth Cons. mine were consolidated in 1883, the Kennedy Mining and Milling Company was organized in 1885, and the Argonaut Mining Company in 1893. From the 1890s until 1942, this belt was one of the more important gold-mining districts in the nation. The value of production ranged from $2 million to $4 million annually. Several thousand miners were employed, many of whom were of Italian, Austrian, and Serbian extraction.

There were two noted lawsuits between the Argonaut and Kennedy mines in 1894 and 1897 in which the former accused the latter of conducting mining operations in their ground. Several disastrous fires have occurred in the district, including one at the Argonaut mine in 1922 that caused the loss of 47 lives. This fire began on the 3350-foot level of the mine and trapped a whole shift of miners on the 4650-foot and 4800- foot levels. 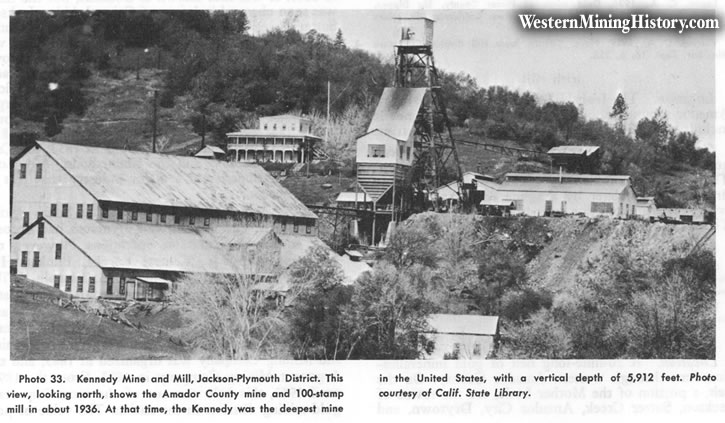 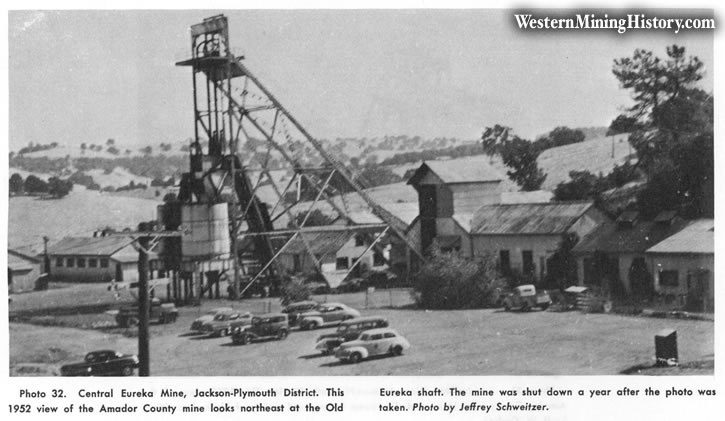