Location and History
Monitor and Mogul are in central Alpine County about six miles sourheast of Markleeville. Mogul is in the north end, and Monitor is in the south end of the district.

The region was intensely prospected during the late 1850s and early 1860s. Substantial amounts of gold, silver, and copper were produced from such mines as the Alpine, Colorado, Currz, and Morning Star. Operators had much difficulty in milling the sulfide-rich or "rebellious" ores, and shipped some are all the way to Swansea, Wales, for treatment. Monitor, named for the famous iron clad warship of the Civil War, also was known as Loope.

Operations declined in the 1880s, but there was some mining activity in the early 1900s and 1930s. The Zaca mine was worked on a moderate scale during the 1960s. The value of the total gold and silver production is unknown, but some estimates have placed it between $3 million and $5 million. 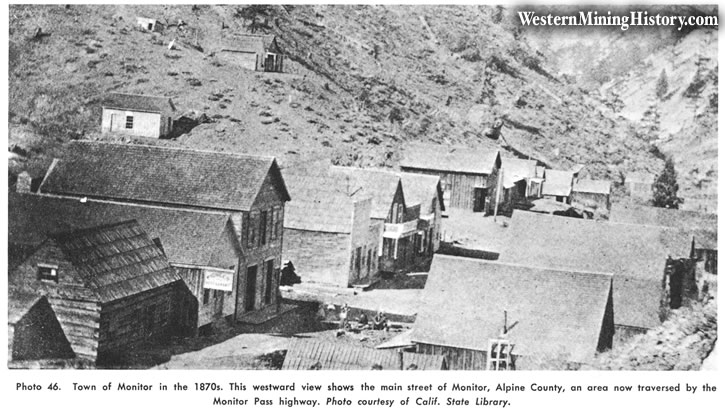 Geology
The district is underlain by volcanic rocks of Tertiary age. Andesitic tuff breccia is most common, but also present are various types of flow rocks including obsidian. In places, particularly at Colorado Hill, which is in the middle of the district, the volcanic rocks have been intensely altered and silicified. These altered rocks have a bleached appearance, in places stained yellow, red, and brown by iron oxide. These bleached zones stand out prominently from the unaltered rock.

Ore Deposits
The ore deposits occur in the zones of alteration and silicification. The gold, silver, and copper are nearly always associated with various suJfide minerals, which include pyrite, chalcopyrite, enargite, sphalerite, galena, argentite, and arsenopyrite. A number of other are minerals also are present. The ore occurs in disseminated form, in veins and seams, and occasionally in tabular sulfide masses. In places high-grade pockets have been found.

Evans, J.T., et al., 1966, Guidebook along the east-central front of the Sierra NevadaÂ·Zaca mine; Geol.