Location
The Mount Bullion district is in west-central Mariposa County about seven miles northwest of Mariposa. The district is in the southern end of the Mother Lode gold belt and extends northwest towards Bagby and Bear Valley (fig. 18). It includes the Agua Fria and Mount Ophir areas.

History
This region was first placer-mined in 1848, many of the miners having been of Spanish descent. Agua Fria Creek and other streams were highly productive (Agua fria means cold water in Spanish). Lode gold-mining began shortly afterward. Much of this district is in the Las Mariposa land grant, which originally belonged to General John C. Fremont. The mines in this grant were not located and surveyed in the same fashion as those on public lands, and to this day the land plats within this grant are difficult to coordinate with established survey lines. The grant later underwent lengthy litigation, and Fremont eventually went bankrupt. He named nearby Mount Bullion for his father-in-law, Senator Thomas Hart Benton, who was sometimes known as "Old Bullion". At Mount Ophir, which is now a ghost town, are the ruins of an early-day mint. From 1849 until 1854 private coinage subject to federal inspection was authorized in California. It is believed that some of the now extremely rare and valuable octagonal fifty-dollar gold slugs were minted here from locally mined gold.

Gold mining in the district continued fairly steadily from the 1850s through the 1870s. There was considerable activity from around 1900 to 1920 when the Princeton and other mines were worked. Some mining was done in the 1930s and early 1940s, and there have been a few intermittent small-scale operations since.

Geology
As shown in figure 18, the gold mineralization is confined chiefly to a northwest-trending belt of slate, phyllite, and metasandstone of the Mariposa Formation (Upper Jurassic). Within this formation are two belts of pyrite-bearing metarhyolite that may have possible future economic significance. Greenstone of the Penon Blanco Formation (Upper Jurassic) crops out to the east and west. Also present are thin bands of serpentine and numerous aplite dikes.

Ore Deposits
Several north-northwest-striking systems of quartz veins occur principally in slate. The veins usually range from four to 10 feet in thickness, although there are some massive ones that are considerably thicker. The ore contains free gold and pyrite, which is abundant in places. Milling ore yielded from y, to y, ounce of gold per ton, and considerable highgrade ore was recovered close to the surface. Some of the ore shoots were extensive; several in the Princeton mine had stoping lengths of more than 500 feet. The greatest depth of development is 1600 feet on the incline.

A number of extensive vein systems have not been thoroughly explored. Also, there are several extensive deposits of pyritic metarhyolite in the Mariposa Formation that in places contain gold. These bodies are several miles long and 60 or more feet thick. 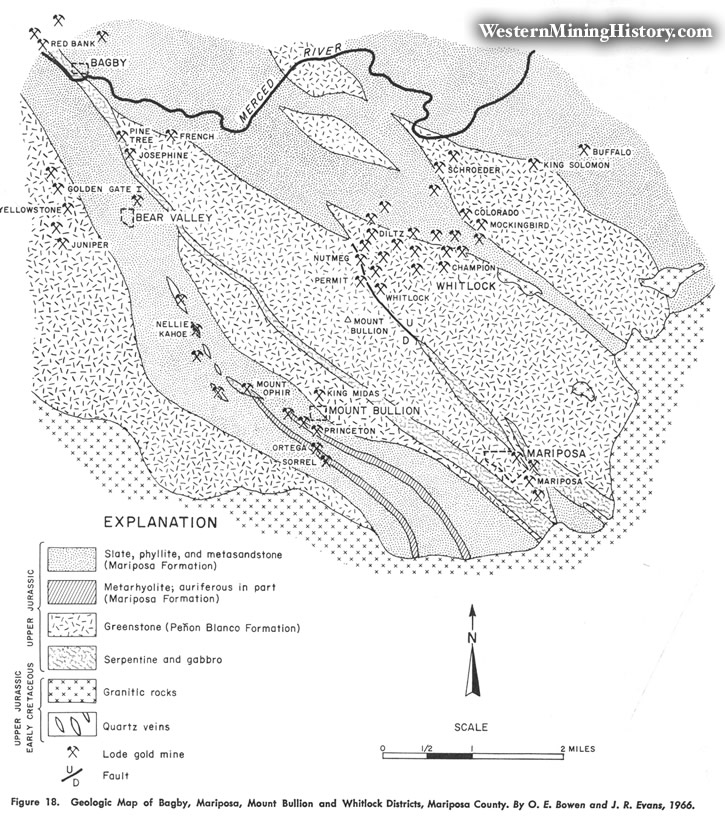