Location
The Soulsbyville district is in west-central Tuolumne County in the general vicinity of the towns of Soulsbyville and Toulumne. It includes the Arrastraville and Buchanan areas.

History
This district was placer-mined during the gold rush. Lode mining began in the early 1850s, and there was a rush to the district that began in 1858 after Ben Soulsby discovered rich ores. The mines were worked on a major scale until about 1915. There was some activity during the 1920s and 1930s, and there has been minor prospecting and development in a few of the mines since. This has been the most productive district in the Sierra Nevada east gold belt, with a total output value to be at least $20 million.

Geology
Granitic rocks, of which granodiorite predominates, underlie the west-central portion of the district (fig. 24). These granitic rocks are intrusive into slate, schist, phyllite, and quartzite of the Calaveras Formation (Carboniferous to Permian). Limestone is to the south and west, and the interstream ridges to the north arc capped by andesite. Numerous dioritic and aplitic dikes are present, often associated with gold-quartz veins.

Ore Deposits
A large number of un oriented gold-quartz veins occur in both the granitic and metamorphic rocks, usually ranging from one to five feet in thickness. The are bodies are often lenticular in shape and contain native gold and often abundant sulfides, especially galena, which is nearly always associated with the gold. Milling-grade are usually ranged from 1/2 to one ounce of gold per ton, and considerable high-grade are has been mined in the district. The maximum depth of development is 1500 feet. 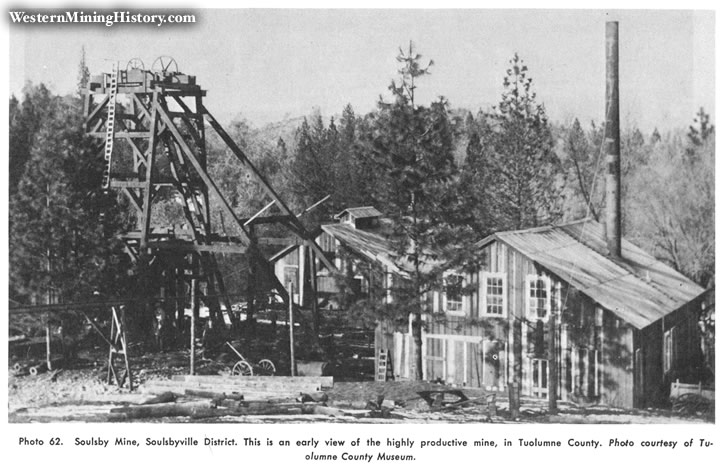