1. DESCRIPTION OF SAMPLES
A mining claim may be validly located and held only after the discovery of a valuable mineral deposit. When it becomes necessary to determine the validity of a claim and the sufficiency of discovery is in doubt, the Government will initiate contest proceedings during which the testimony is given by parties to the contest and their witnesses. During such proceedings, assay certificates or other sample data are submitted as evidence of value, or lack of value. The sample and assay data are important in that the hearings examiner or the court must rely on them to a large extent to determine if a valid discovery has been made.

But numerous decisions hl\ve pointed out that in order to fully understand the results of these assays, the method in which samples were taken and tested must be considered. Without such information they have little probative value and, accordingly, are entitled to little evidentiary weight.

In brief, an accurate and systematic record should be kept of each sample through the cutting, processing, and calculation stages. The use of suitable printed forms will expedite the data recording process, and, equally important, will serve as a check list and lessen the risk of oversight. Three such, forms prepared specifically for BLM use are included in the appendix.

Complete, accurate and signed sample records are in effect legal documents and they should be prepared and preserved with corresponding care.

2. REDUCTION OF SAMPLE VOLUMES
In typical gold placers the variations are so great and the values are so low, any attempt to divide a sample by taking alternate shovels, mechanical splitting, or by other means will invariably yield erratic results. Rather than set out supporting theory which at best would be academic, two examples are offered to show what actually happens. One is based on a laboratory experiment and the other on field practice at an operating mine. First consider the laborabory experiment.

Referring to Figure 21, assume that the bucket of sand weighs 60 pounds and that instead of lead shot it contains 320 particles of placer gold weighing 0.1 milligram each. 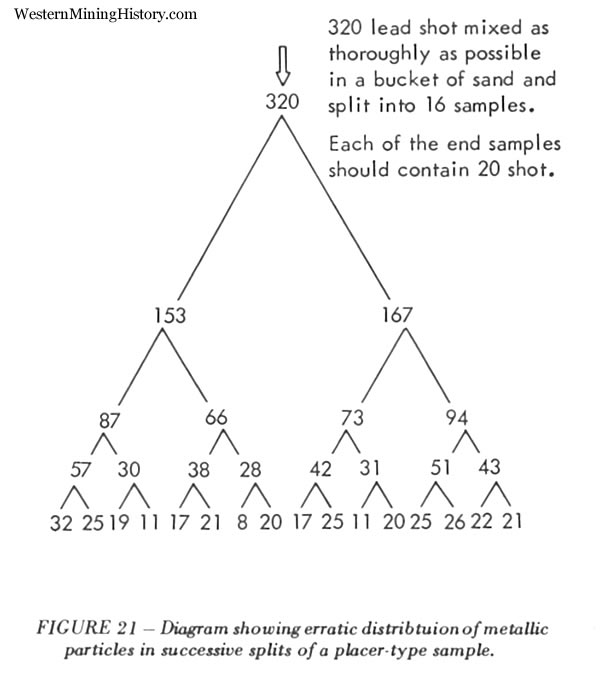 The initial sample will have a value of $1.60 per cubic yard (Using a weight to volume ratio of 3,000 lbs. per cu. yd. and figuring 10 milligrams of gold to the cent)

The first split yields two 3D-pound samples with indicated values of $1.53 and $1.67 per cubic yard, a spread of 14 cents per cubic yard.

As splitting continues, the spread in indicated value becomes progressively greater. On the fifth split, for example, (not shown) the indicated values ranged from 16 cents to $2.72 per cubic yard.

Data from a recent study by the United States Geological Survey (Clifton, 1967) confirm that variances shown in the foregoing example are typical of those found in practice.

The second example has been taken from the prospecting records of an operating company. In this case the gold-bearing gravel excavated from each of 14 shafts was divided as carefully as possible by taking alternate buckets as the work progressed. The hand-dug shafts were 40 inches in diameter and ranged from 30 to 40 feet deep. The individual halves, averaging 71/4 cubic yards each, were washed separately. Results are shown in the following tabulation: 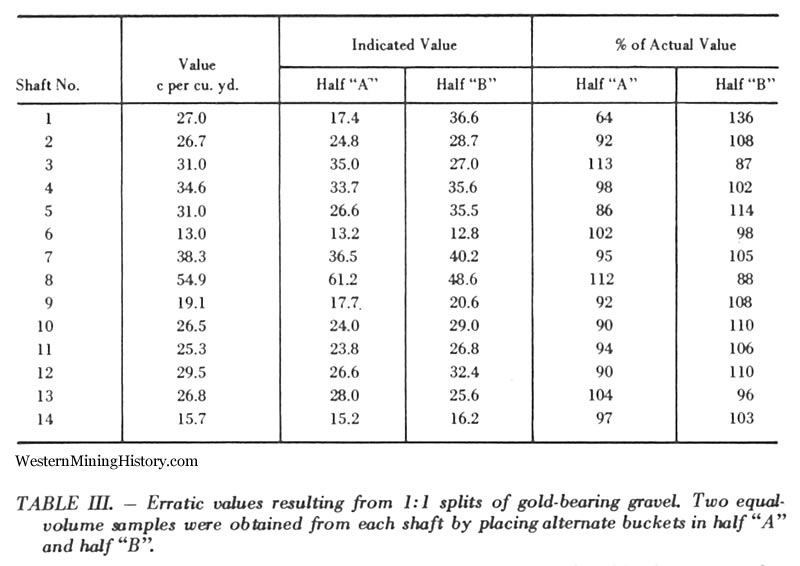 The foregoing examples show that the splitting of gold placer samples should be strictly avoided unless there is some very special reason to divide a sample or reduce its volume before washing or other treatment. In cases where this must be done, the mineral examiner should be fully aware of the erratic and probably misleading results likely to follow. Any divergence from normal procedure should, of course, be noted in the sampling records and in subsequent reporting.

When dealing with fine-size placer materials having a low unit-value, such as magnetite or ilmenite sands, a substantial reduction of the bulk sample or of its concentrate by mixing and splitting is generally a proper procedure and a common practice.