Mine Discovery Tools are available for Josephine County. Click here for more info.

Josephine County has been one of the leading producers of gold in Oregon and has yielded significant amounts of the State's chrome and copper output. Gold was found on Josephine Creek as early as 1852, and the following year additional discoveries on Althouse Creek precipitated a rush during which prospectors spread throughout southwestern Oregon. Hydraulic methods were introduced as early as 1856 to mine the placers.

As in many other mining camps, the depletion of the placers in Josephine County led to the search for lode deposits. By the early 1860's quartz mines were active in the Grants Pass district, and somewhat later, in the Galice, Greenback, and Waldo districts.

The geology of Josephine County is summarized by R. C. Treasher (in Oregon Department of Geology and Mineral Industries, 1942, p. 11-15). The oldest rock is greenstone of Triassic (?) age which underlies much of the southern part of the county, extends north-northeastward, and crops out in the northeast corner. Quartz veins containing iron, copper, zinc sulfides, and gold are common in this rock. The western part of the county is underlain by interbedded sedimentary and volcanic rocks of Jurassic age that strike parallel to the Triassic greenstone.

The sedimentary rocks, the Galice and Dothan Formations, are predominantly black slates that contain varying amounts of sandstone, conglomerate, and tuff. Interbedded with these two formations is a greenstone unit. Peridotite and serpentine occupy belts several miles wide within the Jurassic sequence and strike concordantly with the regional north-northeast trend. Sulfide and gold-bearing quartz veins fill fractures in the Jurassic sediments and greenstone.

Masses of igneous rock of Jurassic or Cretaceous age that range in composition from granite to diorite are exposed in the southeast, northeast, and northwest parts of the county. A small patch of Horsetown(?) Formation, of Cretaceous age, is exposed in the Takilma area in the southwest part of the county. At numerous localities throughout the county, channels, which were eroded into rocks of Cretaceous age and older, were filled with gold-bearing conglomerates of Tertiary age (Shenon, 1933b, p. 152-154). Gold placers also occur in high terraces of Pleistocene age along the Rogue River. 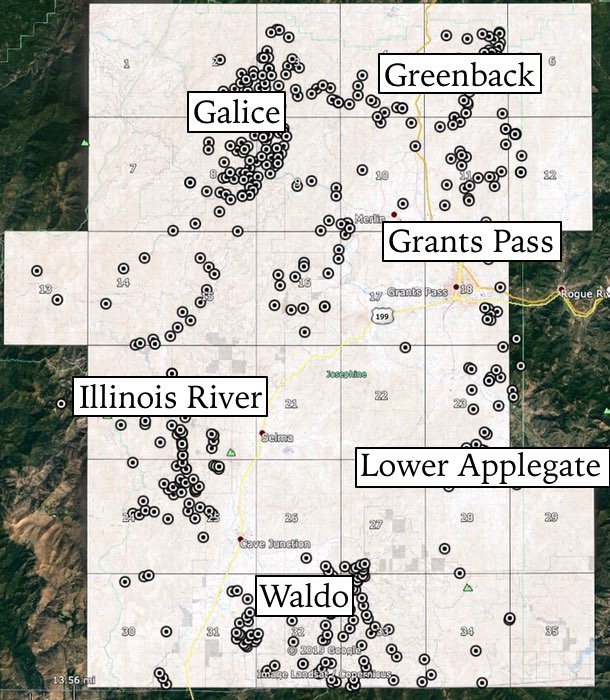 Placer mining began in this district along Galice Creek in 1854. By the 1880's the richer deposits were mined out and Chinese took over many of the operations (Oregon Department of Geology and Mineral Industries, 1942, p. 16). The Old Channel and the Benton mines were among the important gold producers in southwestern Oregon.

The Old Channel mine, about 1 mile west of Galice, was first worked in 1860 and was one of the largest, if not the largest, hydraulic mine in Oregon (Oregon Department of Geology and Mineral Industries, 1942, p. 48-59). The workings were in a gravel terrace about 600 feet above the Rogue River.

Other important mines in the Galice district were the Almeda, Gold Bug, Oriole, Black Bear, and Robertson. The periods of greatest production from the quartz mines were from 1900 to 1910 and from 1939 to 1942. The district was practically inactive from 1951 through 1959.

The following description of the geology of the Galice district has been summarized from Wells and Walker (1953). Steeply dipping sedimentary, volcanic, and metamorphic rocks of Late Jurassic age cross the district in a northeastward-trending belt. From oldest to youngest these consist of sandstone, shale, and siltstone of the Dothan Formation, altered lava flows, tuffs, breccias, and agglomerates of the Rogue Formation, and mudstone, sandstone, tuff, and agglomerate of the Galice Formation.

These rocks were intruded by sheets and dikes of peridotite, gabbroic amphibolite, quartz diorite, and dacite porphyry, all ranging in age from Late Jurassic to Early Cretaceous. The rocks were compressed into isoclinal folds that trend northeastward and were later torn by faults, the most prominent of which are high-angle reverse faults that strike con-cordantly with the strike of the rocks. There are a few northwest-trending normal faults in the area.

Gold is the chief commodity of the Galice district, but considerable copper, silver, and a little lead, in addition to gold, have been produced at the Almeda mine (Shenon, 1933c, p. 24).

The veins of the Galice district fill fractures in many of the Jurassic igneous rocksof the gabbroic amphibolite, diorite, and dacite bodies. Veins' also occur in the Rogue Formation and its metamorphosed equivalent; however, there are no mineralized fractures in the Dothan or Galice Formations. The veins dip steeply and most of them strike north or north-northeast. In most deposits the gold is free and is associated with pyrite, pyrrhotite, and some chalcopyrite in a quartz gangue.

At the Almeda mine a second period of mineralization is recognized. It is characterized by abundant chalcopyrite and a little sphalerite and galena in a gangue of barite (Wells and Walker, 1953).

The Grants Pass district is in east-central Josephine County between lat 42&deg24' and 42&deg35' N. and long 123&deg15' and 123&deg35' W. Included within this district are the Jumpoff Joe Creek, Rogue River, Winona, and Merlin camps.

The earliest mining was along Picket and Jump-off Joe Creeks several years after the discoveries along Josephine Creek in 1852. Although records are scanty, apparently this district was not important until lode quartz mining began in the 1890's (Winchell, 1914b, p. 215). The major lode mine was the Daisy or Hammersley. Some of the important placer mines were along Jumpoff Joe Creek, the Rogue River, and the Dry Digging at the town of Grants Pass.

Total production through 1959, including the estimates of early production, was about 22,000 ounces. The predominant country rock in the Grants Pass district consists of northeast-trending bands of serpentine, greenstone, and Galice sedimentary rocks, all of Jurassic age (Diller and Kay, 1924, p. 2-7). A dioritic intrusive of Late Jurassic or Early Cretaceous age transects the other rocks. The lode deposits are in small quartz veinlets and stringers in greenstone and in the diorite intrusive.

The veinfilling is mainly quartz with small amounts of pyrite, arsenopyrite, chalcopyrite, galena, and local pyrrhotite. Most of the gold occurs in the free state with quartz, but some of the sulfides carry varying amounts of gold.

The date of gold discovery in this district is unknown, but placers along Graves and Wolf Creeks probably were discovered in 1860 (Winchell, 1914b, p. 182) and were productive through the 1940's. In the late 1890's and early 1900's, lode mines such as the Greenback, Dorothea, and Livingston were discovered, and they exceeded the placers in production.

For some time in the early 1900's the Greenback mine was regarded as the largest producer in southwest Oregon (Diller, 1914b, p. 31). After the 1930's, however, production from placers was much greater than that from the lode mines. From World War II through 1959 the Greenback district produced only 100 to 200 ounces of gold annually.

Total recorded production for the district from 1904 through 1959 was 37,062 ounces - 2,001 ounces from lode mines, 28,853 ounces from placers, and 6,208 ounces undifferentiated. Total gold production through 1959, including Winchell's estimate of early placer production from Grave Creek, must have been at least 55,000 ounces.

The geology of the Greenback district is very similar to that of the Grants Pass district. Alternating bands of greenstone, serpentine, and sediments of the Galice Formation cross the district in a northeasterly direction (Diller and Kay, 1924). Most of the lode mines are in greenstone near the contact with serpentine bodies. The deposits are in small veins and stringers.

Veinfilling is mainly quartz and small amounts of pyrite, arsenopyrite, chalcopyrite, galena, and local pyrrhotite. Gold occurs chiefly in the free state; some is associated with the sulfides.

The geology of the Illinois River district was described by Wells, Hotz, and Cater (1949, p. 2-21). The country rock is chiefly tuffs, agglomerates, and flows of the volcanic member of the Galice Formation of Jurassic age. These rocks strike northeast and dip fairly steeply to the southeast. Discontinuous bodies of serpentine and larger masses of peridotite are also present.

An elongate mass of hornblende diorite occupies the northwestern part of the district and borders the serpentine and peridotite. Lode gold deposits are of two types of small tabular quartz bodies or pockets containing free gold and sulfides, and auriferous gossans from which the sulfides have been leached. Both occur in noncarbonaceous rocks of the Galice Formation at a considerable distance from the hornblende diorite.

The most productive placers have been those along the Illinois River.

The recorded production of this district from 1904 through 1959 was only 4,180 ounces and does not warrant its inclusion in this report; however, as placers were mined along Williams Creek soon after 1852 and through the 1870's (Winchell, 1914b, p. 229), it seems logical to assume a total production of well over 10,000 ounces.

Most of the production was from placers, but lode mines were discovered as early as 1860 (Winchell, 1914b, p. 229) and were active on a small scale until 1950. The major lode mines were the Humdinger, Oregon Bonanza, and Porcupine. The most productive placers were along Williams, Slate, and Oscar Creeks and Missouri Flat.

The Lower Applegate district is underlain by Triassic(?) greenstone that is intruded by diorite and serpentine. Galice sedimentary rocks of Jurassic age are exposed in the western part of the district. The gold deposits are in quartz veins in the greenstone, diorite, and sedimentary rocks. Shenon (1933a, p. 50-51) postulated that the ores are related to the acidic intrusives and were formed at shallow depths and at moderate temperatures. Quartz, calcite, pyrite, galena, arsenopyrite, and native gold are the vein constituents. Shenon (1933a, p. 50) noted apophyllite as gangue in the Humdinger mine.

Placers have been the mainstay of this district; however, there are a few lode mines, and some gold is produced as a byproduct from some of the copper mines. Placers were discovered along Althouse Creek in 1853 (Shenon, 1933b, p. 178-179) and were developed mainly by a group of sailors who constructed a long ditch to carry sufficient water to work the placers. By 1901 production declined, but the district was rejuvenated shortly afterward when hydraulic mining enabled substantial economical production from lower grade gravels.

The geology of the Waldo district was described in considerable detail by Shenon (1933b, p. 148-161). Triassic metamorphosed conglomerate, limestone, chert, argillite, and sandstone crop out in a narrow band trending north-south through the central part of the district.

The Galice Formation of Jurassic age underlies the southwest corner of the district, and conglomerate and sandstone of the Cretaceous Horsetown(?) Formation underlie much of the northwestern part. Patches of Tertiary conglomerate, which is gold bearing, occur along the East Fork of the Illinois River in the central part of the district.

Quaternary gravels, among them the auriferous Llando de Oro Formation, fill the valley of the East Fork of the Illinois River and its tributary streams and gulches. Metabasalt, meta-gabbro, and serpentine underlie most of the southeastern part of the district.

The serpentine is believed to be of Jurassic or Early Cretaceous age, but the age of the metagabbro and metabasalt is unknown. Near the greenstone-serpentine contacts copper sulfides were deposited as irregular lenses in fractures. These deposits are in both the greenstone and serpentine. Small irregular deposits of chromite in the serpentine also have been mined.