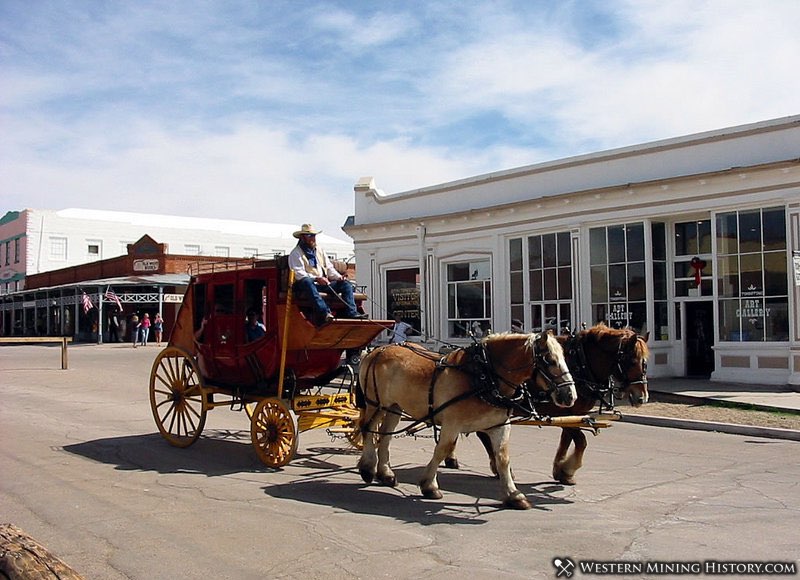 Tombstone, Arizona is certainly one of the most famous, and infamous, mining towns in the West. When Ed Schieffelin, a scout for the U.S. Army, left Camp Huachuca to prospect in 1877, he was told that the discovery of his tombstone was more likely than precious metals. Schieffelin did find silver however, and he named his first claim the Tombstone.

More prospectors entered the area, additional claims were filed, and in 1878 around 100 people occupied the settlement of Watervale. Schieffelin and two partners formed the Tombstone Mining and Milling Company, and built a stamp mill near the San Pedro River. With the district growing, a new town was laid out and in March of 1879 the settlement took the name Tombstone, after Schieffelin’s original claim.

The silver mines were producing increasingly greater riches over time, and as a result the town of Tombstone grew quickly. By fall 1879, Tombstone was a bustling camp with several thousand residents, most of which were living in tents and canvas buildings. Cochise County was formed in 1881 and Tombstone became the county seat. The telegraph arrived early that same year. 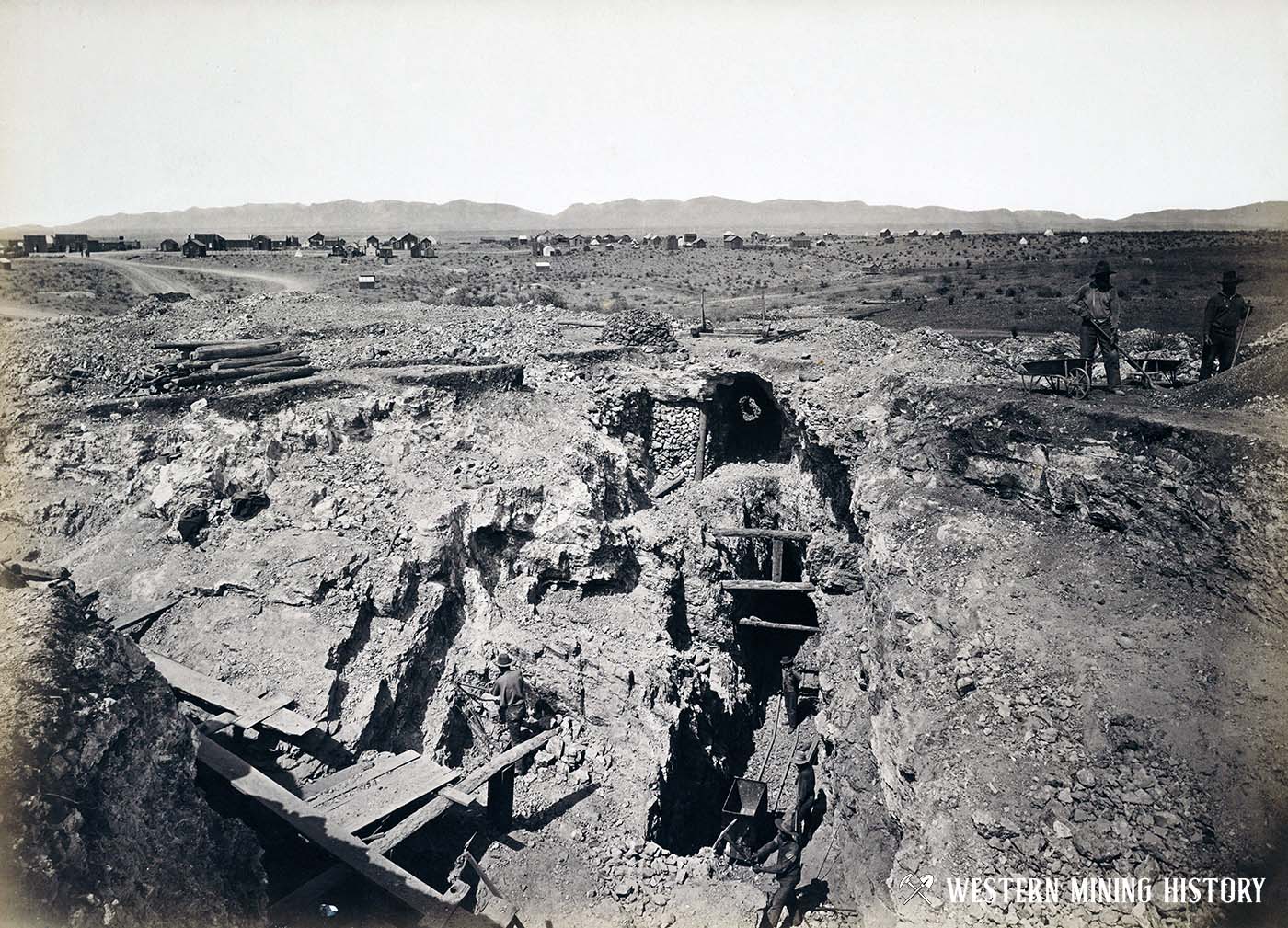 In March 1880, the Tombstone Mining and Milling company was sold to investors from Philadelphia. A couple months later it was reported that the Tough Nut mine, which was one of the mines acquired by the Eastern investors, was mining silver ore as rich as $22,000 a ton. By 1881 6,000 miners were working the numerous rich silver mines of the district.

In the early 1880s, the silver mines of Tombstone produced vast riches, and the thousands of miners making four dollars a day were spending lavishly at Tombstone businesses. While many movies have been made about Tombstone, none of them have captured the frenzied scene undoubtedly unfolding every day on the streets of Arizona’s largest city at the time.

Estimates vary widely as to how much silver was mined a Tombstone, but it is said that over 32,000,000 ounces were produced, worth over a billion dollars today. 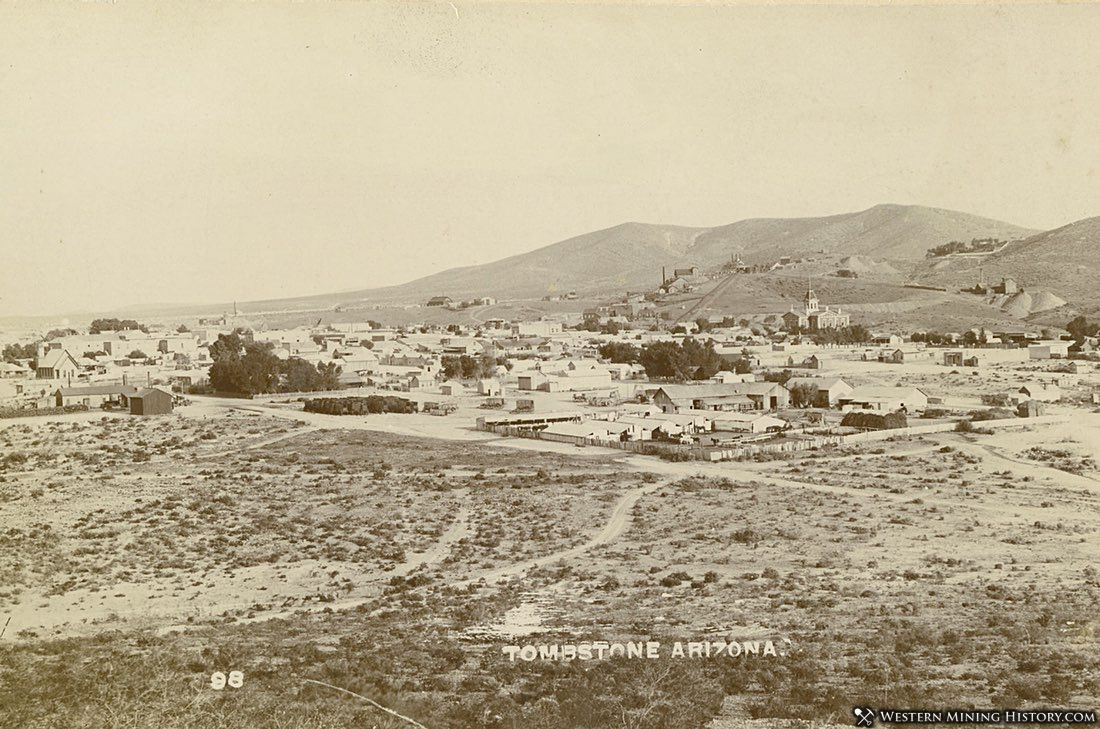 As with most early boomtowns in the West, fires took a heavy toll on the city of Tombstone. The first fire on June 22, 1881, said to have started when a cigar ignited a barrel of whiskey in the Arcade Saloon, destroyed 66 businesses in the eastern half of the business district. Not even a year later, on May 25, 1882, a fire started in a Chinese laundry which burned most of the business district, destroying over 100 buildings.

Gunfight at the O.K. Corral

Prior to the discovery of silver at Tombstone, Arizona was a remote and lawless territory. Bandits and horse thieves were common, and many of them were loosely organized into a gang called the Cowboys. The Cowboys considered a large area around Tombstone their territory, so when thousands of miners and prospectors started arriving in a short period of time, conflict was inevitable.

The now famous lawmen James, Virgil, and Wyatt Earp were early residents of Tombstone, arriving in December 1879. Virgil had been hired as Deputy U.S. Marshal for eastern Pima County, and in June 1881 he is also appointed as Tombstone’s town marshal.

By 1881 the Cowboy gang was involved in numerous murders and robberies, including the attempted robbery of a stagecoach loaded with silver bullion outside of Contention City. Virgil Earp, with Wyatt along as a deputy, arrested some of the Cowboy members, putting the two factions on a collision course that will become the most infamous gunfight in the history of the West.

The Gunfight at the OK Corral occurred on October 26, 1881, between members of the Cowboy gang on one side, and the three Earp brothers and Doc Holliday on the other. Three Cowboys were killed, and Virgil Earp, Morgan Earp, and Doc Holliday were wounded.

Most of what is known about Tombstone largely focuses on the discovery years of the late 1870s and the silver bonanza years of the early and mid 1880s when the city peaked with an estimated 10,000 residents. In contrast to other prominent mining cities from this era, very few photos exist of the city of Tombstone during its boomtown years. One of the West’s most famous locations is somewhat shrouded in mystery. 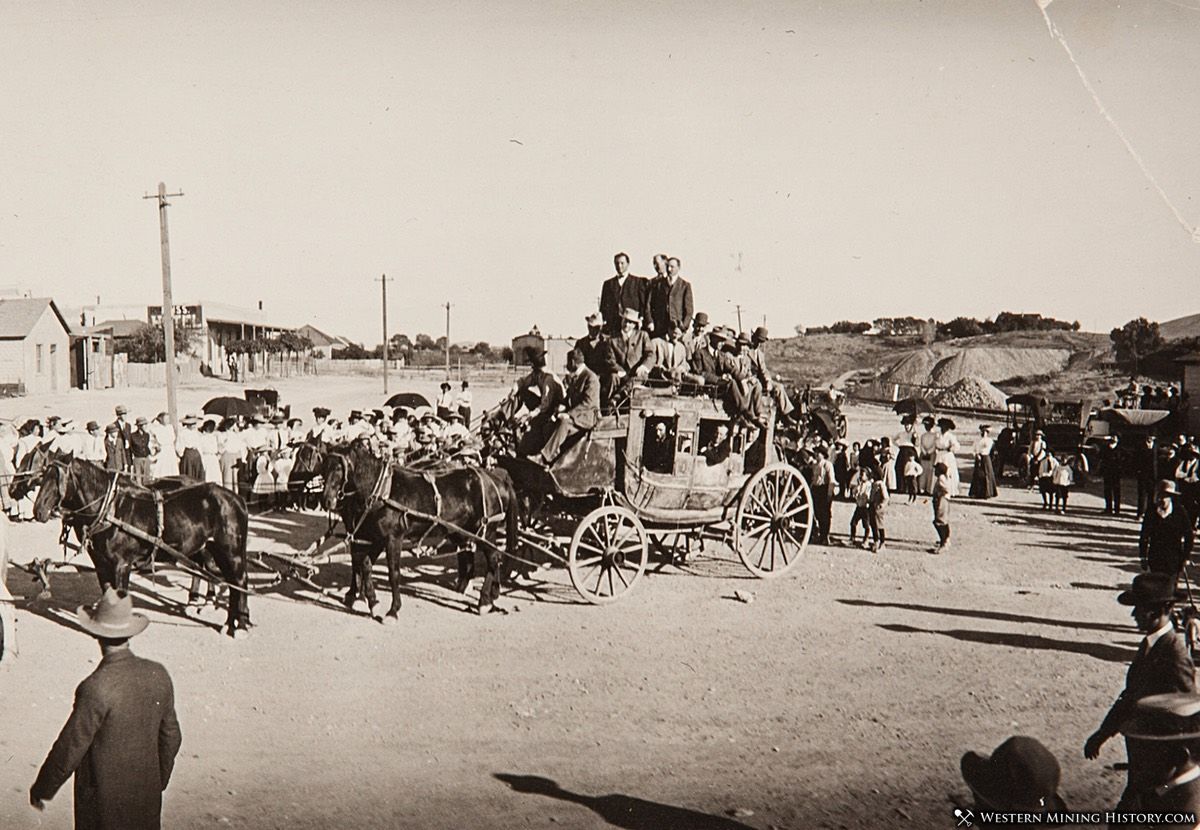 The Last Stage to Tombstone 1903

The Bird Cage Theater, known as “the wildest, wickedest night spot between Basin Street and the Barbary Coast”, closed either in 1889, or 1892, different sources give different dates. Census records indicate less than 1,900 residents in 1890 and less than 700 by 1900.

Little has been written about Tombstone’s post-boom years. Mining journals seem to indicate that silver mining proceeded when the price of the metal justified pumping operations at the mines. The Engineering and Mining Journal reported in 1911 on the “failure of silver mining at Tombstone” due to “the cost of pumping 7,000,000 gallons of water with a thousand foot lift”.

During World War I manganese was mined at Tombstone, and during World War II lead mining brought life back to the town to a degree, but the exciting days of the 1880s were long gone and would never be repeated. 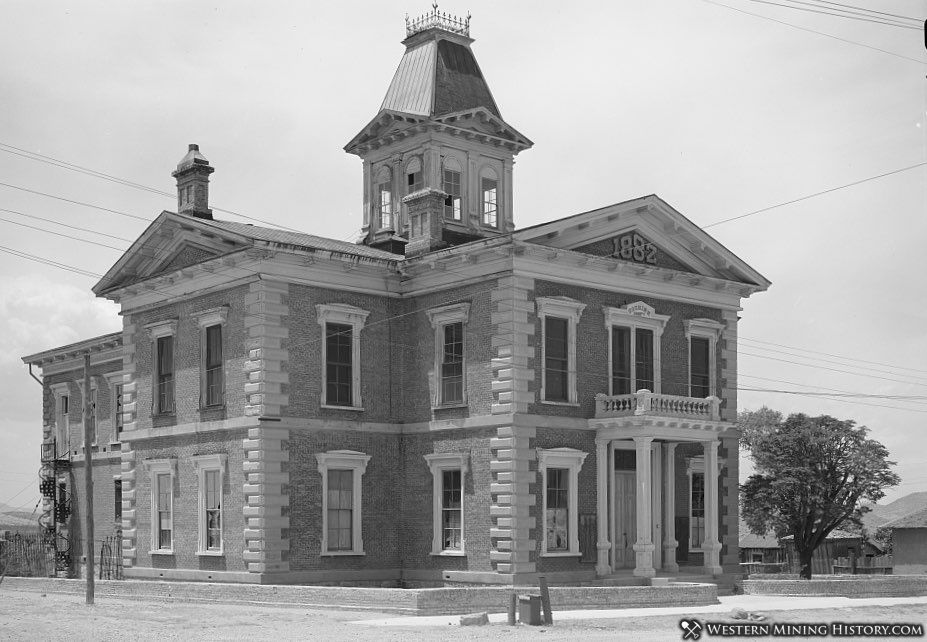 In 1929 the Cochise County seat was moved to Bisbee. Tombstone faded into obscurity in following World War II, but was never completely abandoned. The post office, originally established in 1878, has operated continuously and is still open today.

From Mining to Tourism

Silver may have been the reason Tombstone was settled, but it was the Earp brothers, Doc Holliday, and the Gunfight at the OK Corral that would give the town an economic base well into the 20th, and then the 21st centuries.

The first popular book about the gunfight was published in the 1930s, and many more books and movies about the event were made in the following decades. In the 1961 the remaining historic town center was designated a National Historic Landmark District, described as “one of the best preserved specimens of the rugged frontier town of the 1870s and 1880s" 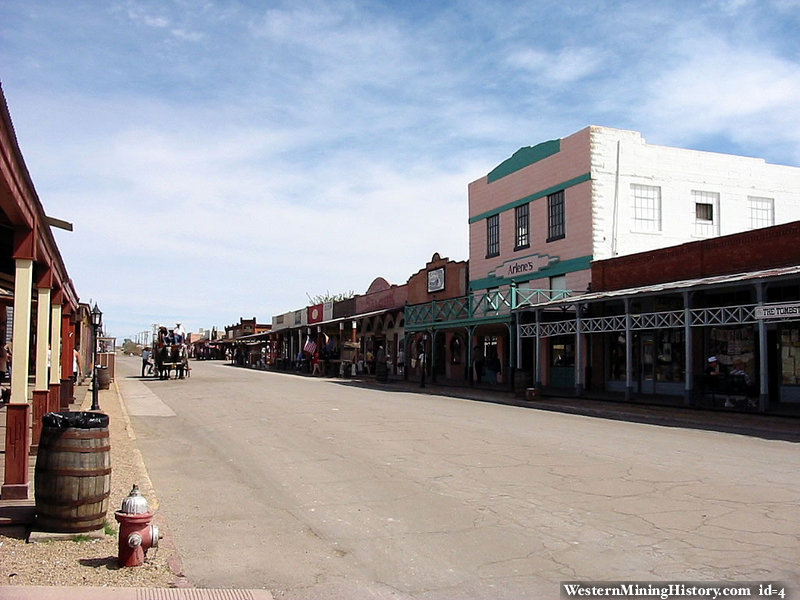 In the 1960s the remaining residents decided to embrace the town’s historic and infamous past, and promote Tombstone as a tourist destination. Some of the original buildings were refurbished and reenactments of the famous gunfight were performed on a regular schedule. The popularity of the town as a tourist destination steadily increased over the years and now around half a million people visit each year.

Historic buildings include the St. Paul's Episcopal Church, built in 1882; the Crystal Palace Saloon, one of the most luxurious saloons in the West; and the Tombstone Epitaph building, where the oldest continuously published paper in Arizona is still being printed. The Cochise County courthouse, built in 1882 at a cost of $45,000, is preserved and open to visitors as a museum.