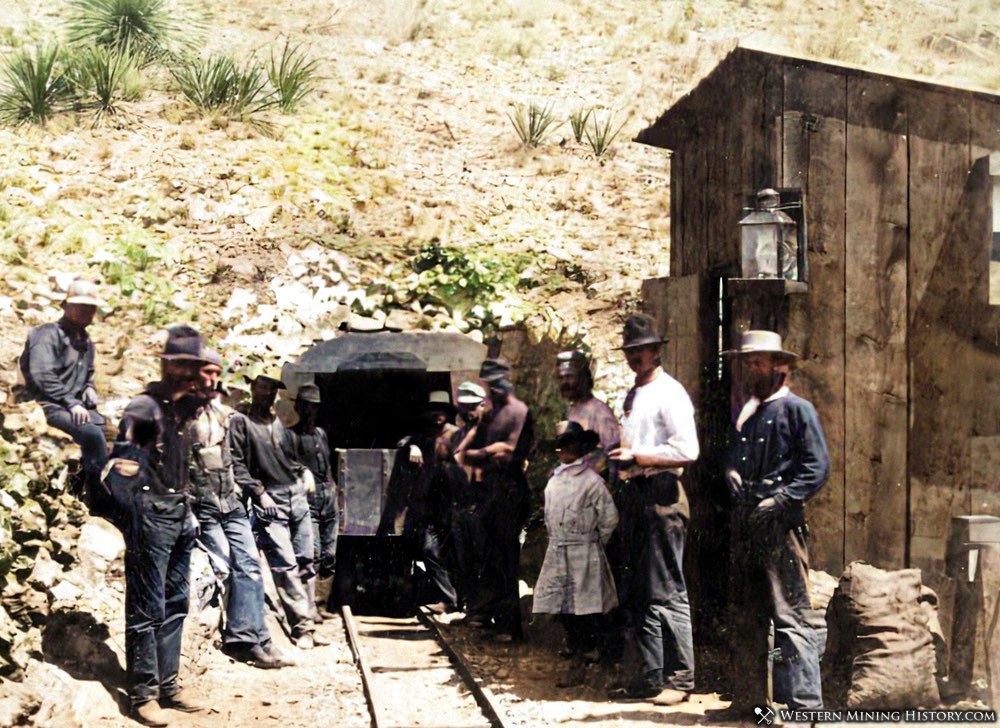 The districts peak years were prior to 1885, but leasers worked the mines into the 1890s. Overall the district is credited with more than five million dollars in silver production.

The town of Total Wreck has no appearance of a wreck. It is a thrifty, neat-looking village, the streets laid out at right angles. The main street is named Dillon street in honor of the discoverer of the mine, and the first to discover minerals in this district.... The town has two stores, two hotels, a restaurant, five saloons, a carpenter, blacksmith, butcher and shoe-shop; also a dressmaker's store, a brewery and about thirty-five houses.... It has a residential magistrate and a deputy sheriff, and I was informed that in case of trouble with the Indians or roughs ninety men could be mustered within sixty minutes. 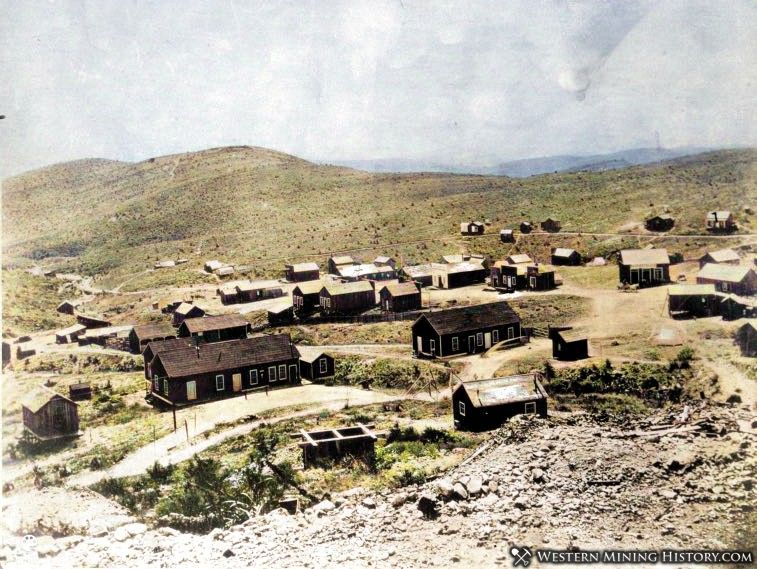 Total Wreck in the News

The Los Angeles Times published many articles on the Total Wreck mine during the 1880s. The following are excerpts from those articles.

Mr. C. C. Lips, who is lately back from Arizona, gives a glowing account of his visit to the now well known Total Wreck mine. He says that he drove from Pantano to Total Wreck, a distance of seven miles, and upon reaching the latter place found a village of considerable extent, the outgrowth and consequence of the mine's vicinity. His visit to the mine itself was a source of great surprise to him. A shaft had been sunk to a depth of three hundred feet, ore of good grade being taken oat all the way down.

It is reported on good authority that a body of ore has been struck in the Total Wreck that exceeds in site and richness any previously found. Thirty men are employed under the superintendence of Mr. John Dougherty. The prospects of the mine are believed to be greater than ever before.

Total Wreck Mine has contributed the largest and most valuable specimen of horn silver ore for the New Orleans Exposition yet received at Tucson, says the Star. It will be shipped with Mr. Wores' cabinet, who thinks it the best specimen in size and quality in the Territory. It weighs thirty pounds and is about 75 per cent, silver or about $3,000 to the ton. 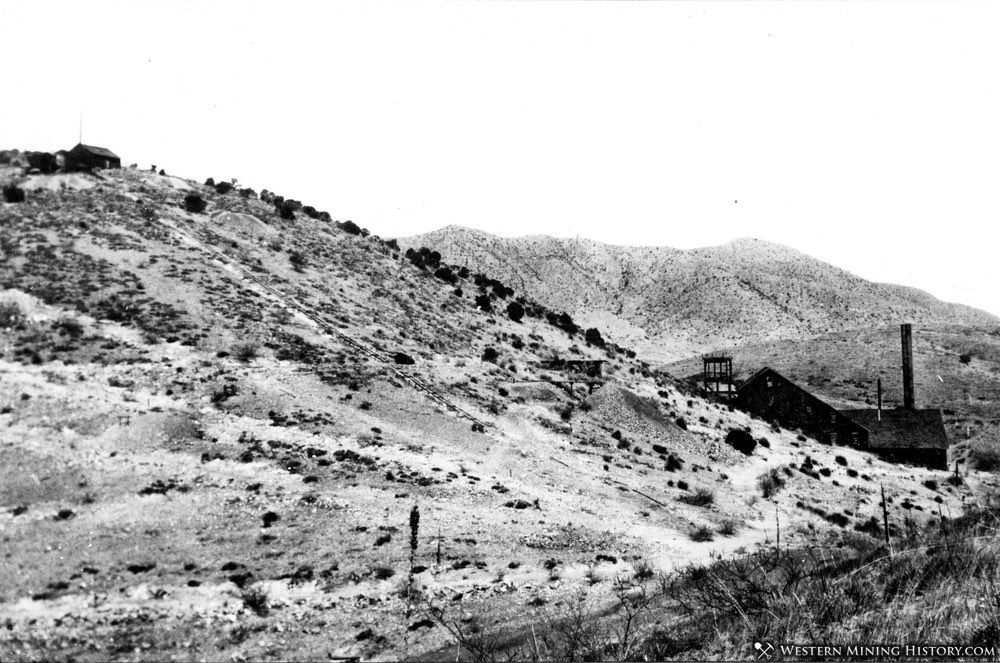 Total Wreck Mine and Mill 1909

We learn from Mr. Vail that the prospects in the Total Wreck mine, Arizona, are very encouraging. Since the mine was closed down, several years ago, after the mill had run out $270,000 of silver, it was leased to parties who, on certain conditions, were willing to take the chances of making it pay.

Mr. Vail found before he closed down, that the mine had reached a point where, to continue work on the scale it had been operated, would soon swamp the company, and he therefore made an arrangement with a company of miners to develop it systematically, stipulating, however, that his own trusted and experienced superintendent, Mr. Dougherty, should direct the manner in which it should be worked.

At the 350-foot level the miners recently run against a very promising body of ore. It has been uncovered to show seven hundred and fifty tons of ore in sight, with an unknown quantity behind it. Samples of this ore, taken at random from different parts of the ledge, have been carefully assayed, and fifteen of these assays have given an average of $151 to the ton.

Apaches on the Warpath

A March 24, 1883 edition of the Sacramento Union gives the following account of an Apache raid near Total Wreck:

A special from Total Wreck says: The Apaches have reached the Whetstone mountains, and a Frenchman and four Mexicans have bean killed. The bodies were brought into Total Wreck. Others are supposed to be killed. Troops have been sent out.

PARTICULARS OF THE MASSACRE

Following are facts given by men who were at this camp at the time of the attack. The Indians, numbering about twenty, came from the south. About dark they encountered Owens and Wolfolk, who were cutting wood half a mile above the camp, and killed them. Then meeting Murray a short distance further up the creek, who was looking for a horse, they fired upon and killed him.

One of the men, named McFarland, engaged in making a pit close by, hearing the firing, ran, and succeeded in making his escape, although the Indians fired some twenty shots at him.

There were four men in camp, who, although having heard the shooting, were not alarmed, supposing that their companions were shooting turkeys, until Armstrong fell with a bullet through his heart, exclaiming, "I am killed. Lookout, boys." Two of them ran into the tent. Childs, who had the only gun in camp, ran down the creek past the Indians, but finding that because of the darkness he could not get a shot at them, returned up the creek and hid in a small dugout near the tent.

The Indians had stopped behind a corral about thirty feet from the tent, and called out in English and Spanish for the men to come out. Not doing so, the Indians fired into the tent, and, seeing no movement, two of them ran toward it, the foremost one receiving a ball from Childs' rifle, who at that moment fired from the dugout. The Indians returned Childs' fire, one bullet cutting his hatband, another shattering his riflestock. The Indians, becoming confused at his firing, ran off.

McFarland, in the meantime, had made his way six miles to Evans' camp to warn Mr. Miles, who was to arrive there with his family that evening; but he did not, having been delayed. Upon receipt of the news at Fort Huachuca, Major Nolan sent a detachment of soldiers to protect the women and children at Igo's ranch, while Captain Madden, with a company, proceeded to the coal camp.

The dead Indian was recognized as a former scout in the Government service. The funeral of the four men killed took place this afternoon. A large wagon, with an eight-horse team, draped mourning, conveyed them their last resting place, followed by a large number of mourners.

While the ceremonies were being observed, a report was received that four more victims had been brought into Total Wreck.