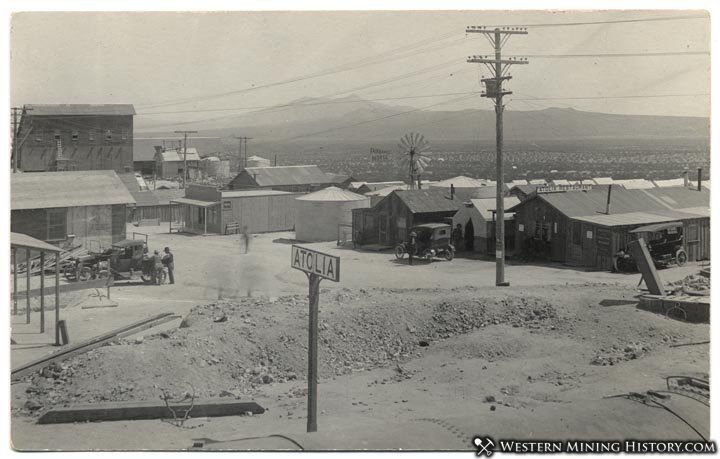 Atolia came to life as a tungsten mining town in 1906. Its peak years were around World War I, when it was the largest tungsten producer in the world.

Atolia's growth was slow as demand for tungsten remained low and excitements at new gold districts throughout the region overshadowed the Atolia mines. This changed at the onset of World War I when demand for tungsten increased dramatically as a an important component to hardened steel alloys.

Interestingly, Germany had been one of Atolia's largest consumers of tungsten until the onset of the war, at which time their supply was cut off by English naval blockades. Prior to entering the war, the United States still traded with Germany but German ships were unable to travel to America to pickup cargo.

In response, the Germans developed the world's first cargo submarines, called U-boats. The German submarine Deutschland arrived in Baltimore, Maryland on July 9, 1916. A shipment of tungsten from Atolia was one of the goods loaded onto the U-boat. A March, 1964 article in the San Bernardino Sun details some of the events related to this shipment:

"The submarine shipment, as told to the writer by Atolia's co-discoverer, Pete Osdick, caused much excitement in the little desert mining town. Several hundred sacks of concentrate were placed on the town's depot platform under guard. The Johannesburg local set out a baggage car. The ore was loaded in the car. Guards took their stations at each door and the car was moved to Barstow."

"At Barstow it was added to the California Limited, then the Santa Fe's crack passenger train and the only one that did not make meal stops at Harvey Houses. When the limited reached Chicago, the well-guarded car of tungsten was switched to another railroad and moved to Baltimore, where it was lowered into the hold of the waiting Deutschland."

"The incident of the transcontinental trip was a long mile from the earlier status of the rock known to old time miners as white spar, or heavy spar. To the gold seekers who prospected the desert for miles around the famous Yellow Aster mine at Randsburg, this spar was a nuisance that clogged washers. Its presence often caused prospectors to shun the 'Stringer District.'"

Tungsten ore went from being worth around six dollars for 30 pounds to over a dollar a pound. This created quite an excitement in the district, and citizens of neighboring towns like Randsburg would travel to Atolia in search of previously worthless ore samples that littered the ground around the mines. The ore became so valuable that miners began smuggling samples of it out of the mine in their lunch boxes, a practice known as "high grading" that was common in precious metal mines.

With a war-time population of over 2,000, Atolia was the world's most important Tungsten mining location.

The end of World War I resulted in tungsten prices plummeting, and the mines of Atolia were closed. By 1922 the town was a shell of its former glory and the post office was closed.

By World War 2 the mines of Atolia were once again in full production, but open-pit methods and heavy machinery replaced the labor-intensive underground mining methods previously used. The town was once again lively, but nowhere near the levels seen during the previous boom period.

Tungsten mining continued after World War 2, but by the mid-1960s the mines were closed and less than 10 people lived in Atolia.

The following article from a March 1916 article of the Los Angeles Herald provides an interesting account from Atolia's World War I boom times.

Fortune In Ore Taken In Raid On Gamblers

With a fortune In tungsten ore piled high on the table as evidence, an armed posse of deputy sheriffs from San Bernardino early today raided an alleged gambling game in Atolia, the tungsten mining town on the San Bernardino desert, and arrested the proprietor of the establishment.

At the same time other deputy Sheriffs from San Bernardino raided two other establishments at Atolia. The armed officers stood outside the room where the alleged gambling game was in progress and saw the players make huge bets with tungsten ore In lieu of gold. When the officers intervened there was nearly 100 pounds of ore on the table for which the players were contending.

Jacinto Gonzales and Guadelupe Gonzales were arrested. A faro wheel was confiscated by the officers and half a car load of bottled beer and whisky was taken from the place. The raid resulted from reports reaching San Bernardino that Atolia was being conducted like a “frontier town of ’49,” and that nightly gambling games were In progress.

Sheriff McMinn in San Bernardino Stated that he would keep officers on duty In Atolia to prevent a re-estabilshment of the conditions he claims Were halted by the raid.