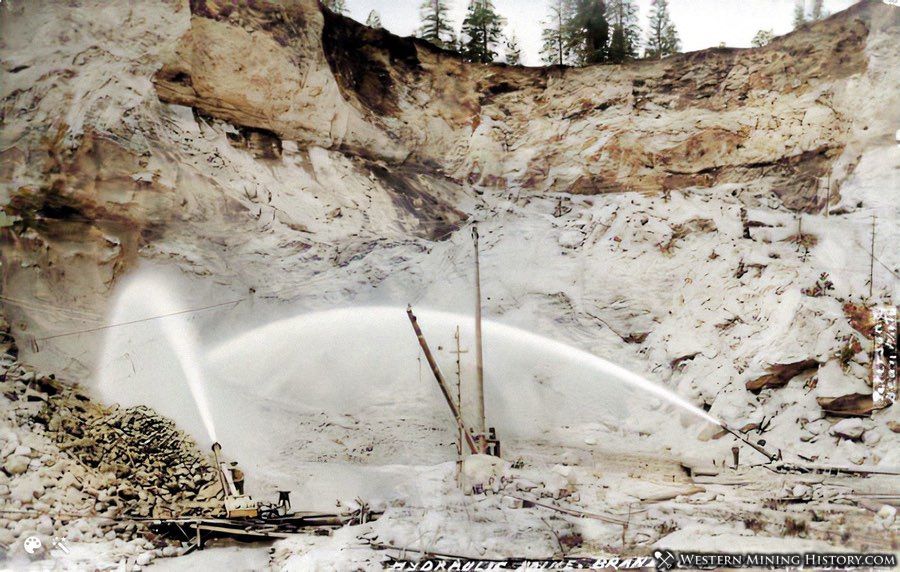 Construction of ditches to bring water to the area started a boom in hydraulic mining starting in 1855. Within a couple years Brandy City had thousands of residents. Despite the apparent prosperity of the town, there are no records of a post office being established until 1909.

Fire burned the town on many occasions, the worst one being the 1863 fire that burned almost the entire town. Only two commercial buildings were saved.

As with many California Gold Rush towns, Brandy City's peak years with thousands of residents was short lived over a few years in the 1850s when there was plenty of placer deposits yet to mine. As the ground was mined out and mines were consolidated into larger operations, the town settled into a population of around a few hundred which it maintained for decades.

By 1868 Brand City was one of California's most productive hydraulic gold mining districts. Hydraulic mining continued until 1884 when a law was passed that prohibited hydraulic mining. Some of the mines continued to be operated illegally for years, but eventually all were shut down.

With the hydraulic mining industry shut down, residents immediately started leaving Brandy City in search of better opportunities. The town's population went from a few hundred to under fifty in just a few months.

By 1890 the restrictions on hydraulic mining were being relaxed and mines at Brandy City commenced operations. As part of the agreement with the state, the mines were now required to build dams and tailing ponds to control the runoff from the mines.

During the first decade of the 1900s new investments were being made in improving mine infrastructure and building new flumes. By 1909 over 100 men were working for the Brandy City Mining Company. The Brandy City mine would for a time be the largest in the state, covering an area of 1,000 acres.

A new era of prosperity resulted at Brandy City, and in 1909 the first recorded post office was established. It is unusual for a town that was so prominent in the 1850s and endured for decades to have never established a post office, so perhaps available postal records are incomplete.

The last major fire at Brandy City occurred in August of 1920. By this time many of the town structures were company owned, and the fire consumed the boarding house and several other company buildings.

With the mines in decline and the devastation of the fire, it was clear that Brandy City's prosperity was over. Residents moved away over the years and the post office was closed in 1926. By 1941 only a few residents remained.

Today Brandy City is a ghost town and no structures remain. WMH was unable to find any historical photos of the town.