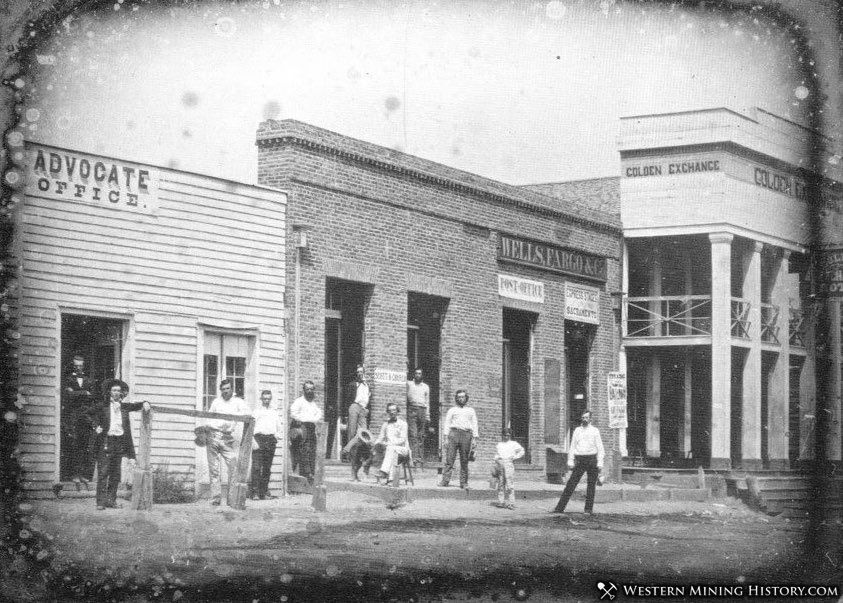 This town, settled in 1848, derived its name from its crystal clear springs. Among the richest spots in this vicinity its diggings produced a 25 pound nugget, one of the largest ever found in El Dorado county.

The town's most thriving period was in 1851. Later it became a contender for the county seat. Through its lumber and lime production, and through agriculture, Diamond Springs retained some of its early importance

Preceding text from a historical marker in town

On Tuesday, August 5th, at 10 a.m., says the Placerville American, of Saturday, large volumes of smoke were seen from this city rolling upward over the hills in the direction of Diamond Springs, and its rapidly increasing breadth gave us the unwelcome assurance that no ordinary fire was laying waste our neighboring town, but three miles distant.

Hastily mounting a horse, we reached the scene of the conflagration when its ravages were but about half complete. It was indeed a true California fire, for it literally spared nothing inflamable; for when there was no building or fence to burn, it ran along the surface of the ground consuming the very grass and weeds. It was surprising to witness the rapidity and nature of its movements. At times a large volume of flame like the fragment of a cloud would seem to be detached from a burning building, and leaping clear and apart would instantly alight upon another building, which seemed as instantly enveloped.

It was impossible to save but little more from a building than the first arm full, for to return for the second was only to be met by the devouring element. The fire originated in the Howard House, or between it and an adjoining building; believed by a few to have been the result of accident, and by many as the work of an incendiary, as the fire was first seen in a part of the building where no fire had been used.

From the Howard House which is a little west of the center of the burnt district, the fire connected immediately on the west with the extensive grocery and provision store of Terrill & Gilman and the livery stable of Ellis & Erwin, and so rapid was the burning, though they saved their horses, they lost their harnesses and buggies. From thence westwardly, every building was consumed to Josh Yeadon's blacksmith and wagon shops; these were saved.

Quite a strong breeze had been created that carried the flames to the opposite side of the street, communicating with Crystal Saloon, and St. Charles Hotel and Temperance House, which with all the intervening buildings, were together, and almost in the same instant in flames. The wind being in the proper direction, brought the cottage residence of G. P. Morrill, and the tine dwelling of Dr. L. Bradley on High street, occupied by George Lander, and the Union Hall and the cottage of W. P. Scott, on the hill above, in imminent danger, at the same time sweeping eastwardly on both sides of Main street, it indeed looked like a doomed town.

But by exertions that were not lacking in energy, the last named buildings, with the exception of Dr. Bradley's, were saved uninjured. Dr. Bradley is editor and proprietor of the Granite Journal, and now resides with his family at Granite.

In its progress eastwardly, it soon reached the village church, a large wooden structure, and the only church in the place, used, we believe, by all denominations, but for which there was not (as with the churches in this city at the late fire,) a special providence to save. The volume of smoke and flame that rolled up from this building was immense, and the sight of it, apart from its destructiveness, was grand.

Next in order, on the north side of Main street, was the livery stable of Peter Gile; then two more buildings, the property of W. P. Scott; and next, his admirably constructed fire-proof building and the adjoining one of Alex. Hunter, both of which now stand out, the only unscathed mementos of the entire business portion of the town. Next went the Golden Exchange. It didn't melt, for we should have seen something of it afterwards. It just went upward like a flash, but as it was it was always in the way, who cares but Strelitz?

A few buildings besides this, at the water tank on the north side of the street, and at S. G. Cornell's building, (which was saved,) on the south side, and directly opposite, the further progress of the fire was arrested. About eighty buildings were destroyed, involving, with other property, a loss of about one hundred and thirty thousand dollars. Every hotel, every saloon, and every business stand of importance in the place, was destroyed, but the two mentioned as fire-proof, and these seem but to highten the otherwise complete desolation.

There were but two fire-proof buildings in Diamond Springs—that of W. I. Scott, which he occupies as the office of the Eureka Canal Company, and the one adjoining, owned by Alex. Hunter, of this city, and occupied by Wells, Fargo & Co. Both escaped entirely uninjured. In fact, so perfect was their construction, that on opening Scott's doors, two hours after the fire, the air inside was decidedly cooler than without; and three large dogs, that were locked within for safe-keeping, came yawning and stretching themselves towards the doors, as though they had just passed a comfortable night's sleep.

This fire-proof block was made the repository of a large amount of valuable property, belonging to residents in the immediate vicinity, all of which was saved uninjured. Mr. Strelitz, watchmaker, jeweler and assayer, saved a large amount that he could not have done but for the doors of Scott's building being kept open for their reception by Mr. George Lander to the last moment practicable with safety.

Mr. Scott, who was at Coloma at the breaking out of the fire, but home again within an hour of the same on receiving a telegraphic dispatch, was also fortunate in saving his new and beautiful cottage on the hill above Union Hall, though exposed to the full sweep of the hot blast and flying cinders. It was by the indefatigable and well-directed exertions of Mr. Roberts and three or four trusty and energetic men that its preservation was effected, Mr. John Boyle saved a very large proportion of his goods in a fire-proof vault in the rear of his store, which he had only completed the week before. 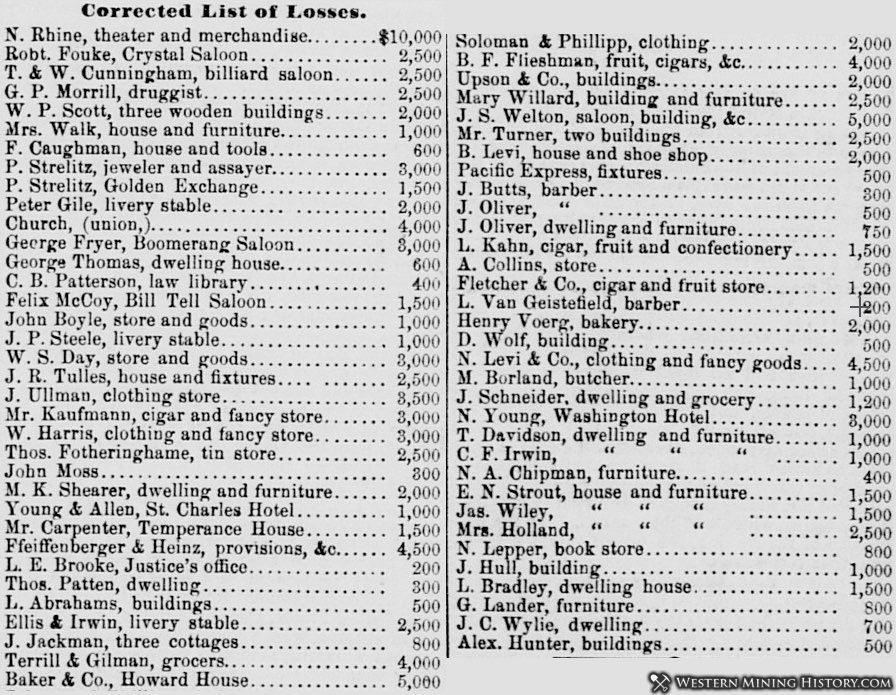 Losses from the 1856 fire at Diamond Springs, California

On the 6th of August, one day after the Diamond Springs fire, the Mayor of Placerville, which town, as our readers all know, has but recently been swept away by the devouring element, transmitted, as the bounty of citizens to fellow sufferers in Diamond Springs, $1,361 in cash and two large loads of provisions. The reception of this truly generous gift is becomingly acknowledged, through the last Placerville American, by a committee of citizens in Diamond Springs.

QUARTZ NEAR DIAMOND SPRINGS
From the Sacramento Daily Union June 17, 1857

Some very handsome quartz specimens were exhibited to us yesterday, which were taken out of a lead discovered not long since, one and a quarter miles south of Diamond Springs, in El Dorado county. It has been worked with arastras for twenty-eight days, with marked success. In that time the company has taken out with four arastras, three hundred and fifty-five ounces.

The quantity of rock crushed since it was opened is forty-four tons, and the average product per ton, for the twenty-eight days, was one hundred and thirty dollars! This is an extraordinary yield - particularly as the rock promises to maintain that average. The lead is embedded in granite - averages four feet in thickness - though at thirty feet below the surface, which is the depth to which it has been prospected, it is five feet thick.

One of the partners, Mr. Stroud, is on his way to San Francisco to purchase machinery for using steam power. It is the intention to work arastras by steam, and to crush the rock in its dry state. It will be submitted to the action of the arastras in water.

Other leads have been located in tho same section, but have not been thoroughly prospected. A lead, reputed very rich, has been discovered in Pleasant Valley, which is some nine miles east of Diamond Springs. It is located near Dr. Slaughter's, on the Old Carson Road. An ex-member of the Legislature, Mr. Borland, is one of the owners.

A hill claim near Diamond Springs, owned in part by a friend of ours, pays per week, as the product of four men, something over fifteen hundred dollars. Immediately in the town, and on the lot upon which the old Howard Hotel stood before the fire last year, surface diggings which average ten dollars to the hand, have recently been struck.

The probabilities are that most of the lot will be worked over, as well as some of those adjacent. Since the fire which destroyed the business portion of the town last summer, there has been built eight fire-proof stone stores, three of brick - two more - each of stone and brick are now under contract. We ere glad to hear that Diamond Springs is going ahead so steadily and prosperously.

ROAD AGENTS - They Robbed the Railroad Station at Diamond Springs.
From the Sacramento Daily Union November 14, 1896

Word was received in this city yesterday that the railroad station agent at Diamond Springs, a small town on the Placerville line, between El Dorado and Placerville, was held up at the point of a pistol by two men on Thursday evening and forced to open the company's safe, from which a sum of money amounting to nearly $60 was taken.

The story told by the agent is to the effect that as he was closing the station preparatory to going home two men approached him. One of them stuck a pistol in his face, at the same time telling him to go quietly back and open the safe. Swing no way out of the trouble, he was forced to comply, and stood by while the robbers looted the strong box.

After the safe had been ransacked the thieves compelled the agent to walk with them down the track, the better to enable them to escape without an alarm being given until they had a good start.

The station at Diamond Springs is a full half-mile from the town, and by the time the agent arrived there and Spread the alarm it was too late to effect a capture.

Neither of the men appeared to have been masked, and a very fair description was soon sent to the officers throughout this section of the state.