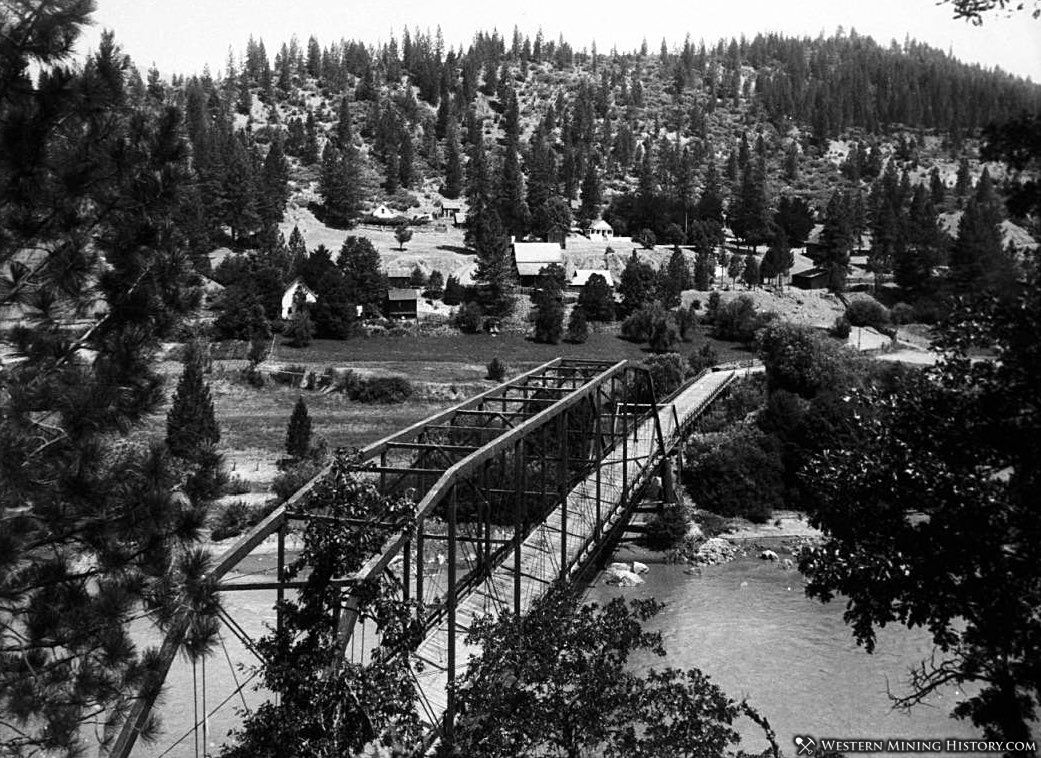 Douglas City is one of the oldest white settlements in Trinity County and the site of the 1848 discovery of rich gold placers that initiated the rush to the Trinity gold fields over the next few years.

The first gold discovery was made by Major Pierson B. Reading, a rancher from the Sacramento Valley that decided to search for gold after hearing of the discovery at Sutter's Mill in Coloma. Pierson visited the Coloma discovery site and concluded the gravels were similar to those he had seen while trapping in the Trinity region in the northern part of the state.

Pierson organized a party of 64 Indians and headed north, discovering rich gold placers at the present site of Douglas City. He only worked the site for about six weeks before a group of prospectors from Oregon arrived and forced him out of the area. Pierson was said to have retrieved $80,000 in gold in that short period, an enormous sum at the time.

The settlement was initially called Kanaka Bar, named by the Oregon prospectors that took over the mines in 1848. In 1859 the settlement moved a quarter mile from the initial site and renamed Douglas City. 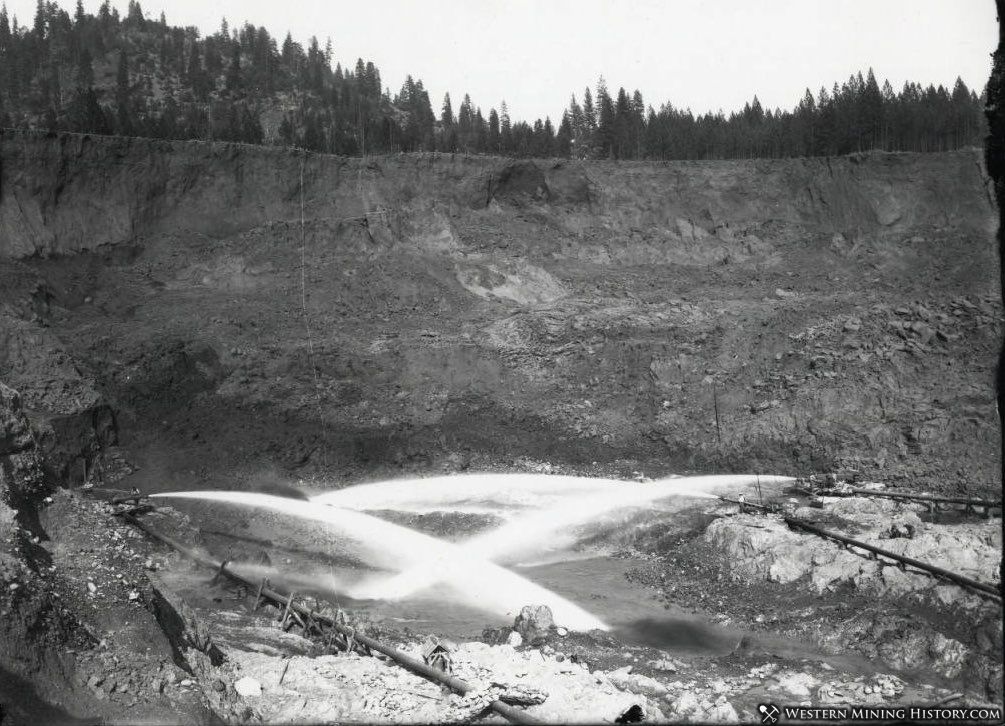 The Union Hill mine near Douglas City was one of the largest and longest operating hydraulic mines ever developed. The mine operated between 1862 and 1928. In 1900 construction was started on a 15 mile long ditch system that included an elaborate siphon and steel bridge designed to carry the 30 inch pipe and still have room for a wagon. The siphon was 5,000 feet long and was a remarkable feat of engineering at the time. 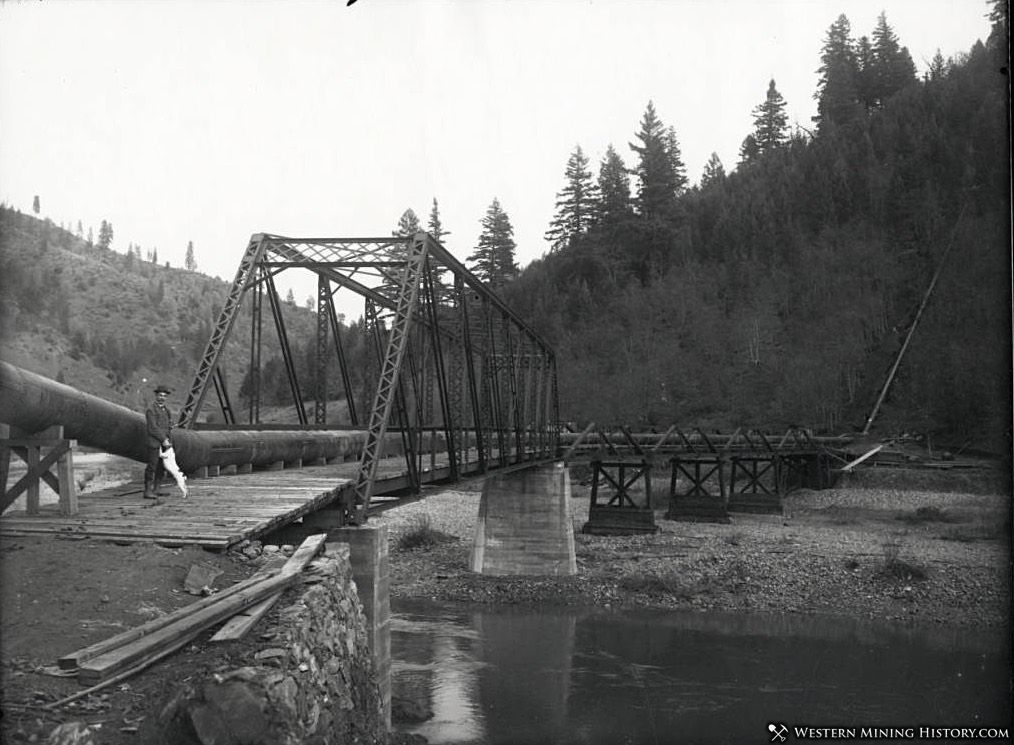 Steel Bridge and Siphon at Union Hill Mine ca. 1907

The Indian Troubles in Trinity
From the Marysville Daily Appeal August 16, 1863

About 60 volunteers who left hero yesterday morning to attack a band of Indians who were threatening Douglas City, have returned. They surrounded the camp, supposed to be occupied by Indians, but they had evidently got wind of the affair just in time to make their escape. Quantities of provisions, bows, arrows, etc., were captured. The camp fires were still burning when the troops arrived.

It is believed by some that the gathering of Indians was for the purpose of making war on the Cottonwood tribes, and not to burn Douglas City, as first reported. The Indians on New River, 45 miles from here, have murdered two Chinamen. The white population all leave there tomorrow. Weather cool and rainy. 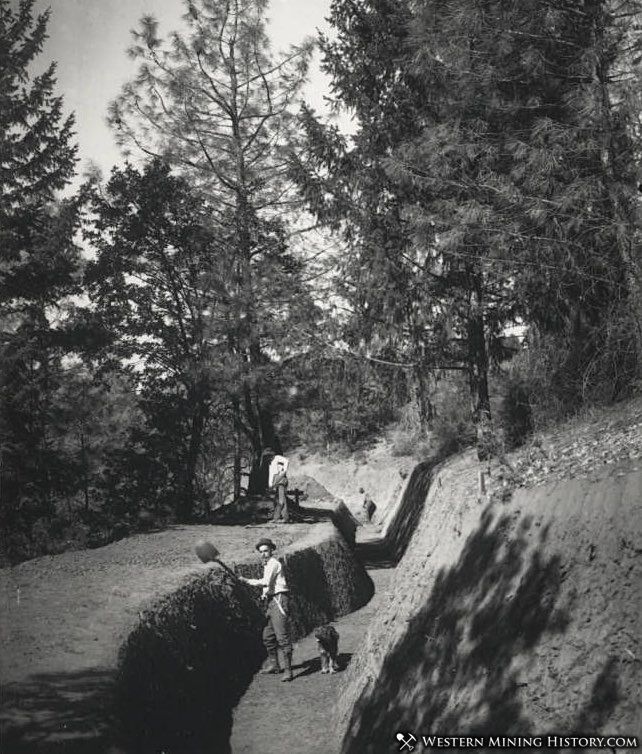 Construction of the 15 mile long ditch at the Union Hill Mine ca. 1906

I recently visited the ancient mining camp of Douglas City, on Trinity river, and as I looked upon the vacant, dilapidated dwellings and business houses, I was reminded of Goldsmith's description of the "Deserted Village." The camp was started during the summer of 1858, and the business of the place was done by 5 general merchandise stores, 2 dry goods stores, 1 drug store, 1 meat market, 1 blacksmith and wagon shop and 2 hotels.

The three precincts of the camp formerly polled 298 votes. They now poll about 80. The floods of December, 1861, came along and the river rose to a height of 60 feet above low water, and cleared the river of all bridges, wheels, etc., so that up to the present time there is not a single permanent bridge on the entire stream.

The county voted at the last election to issue bonds and build bridges across the river at Douglas City and Trinity Center, so that in course of a year it will be possible to make the trip through the county from north to south at any season of the year, instead of from July to January, as at present.