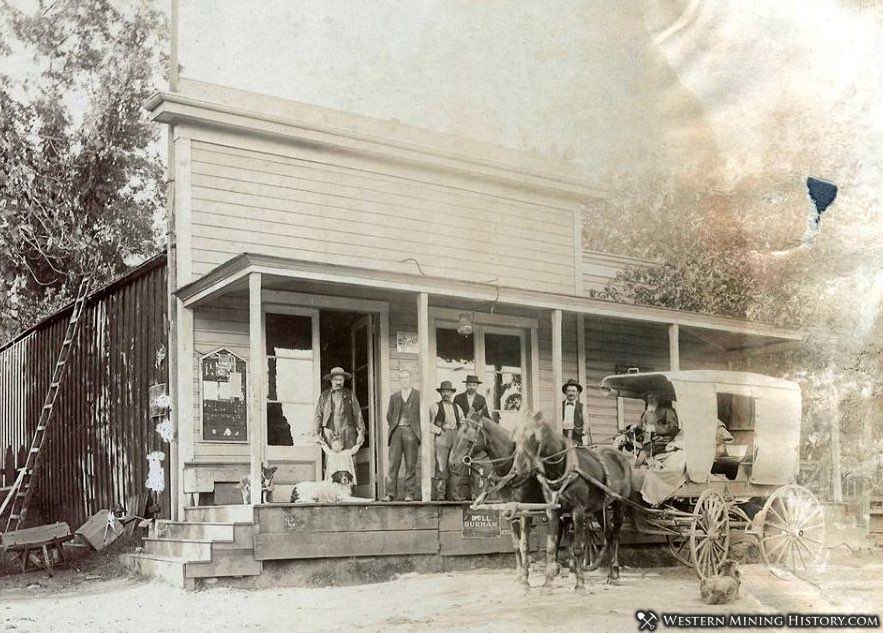 A historical sign at La Grange gives a brief history of the settlement:

"French Settlers originally established the community of French Bar along the Tuolumne River in 1850. After the destructive floods of 1851-52, citizens of French Bar relocated one mile up stream above the flood plain."

"Renamed La Grange, the new town prospered as a mining and agricultural community, and served as the county seat of Stanislaus County from 1856 to 1862"

La Grange lost the county seat to Knights Ferry in 1860, an event which ended the great prosperity of the town. It's population was diminished, but La Grange outlived most Gold Rush towns as a center of hydraulic mining, and later gold dredging. Some of the largest dredges ever built worked the ground in this area. 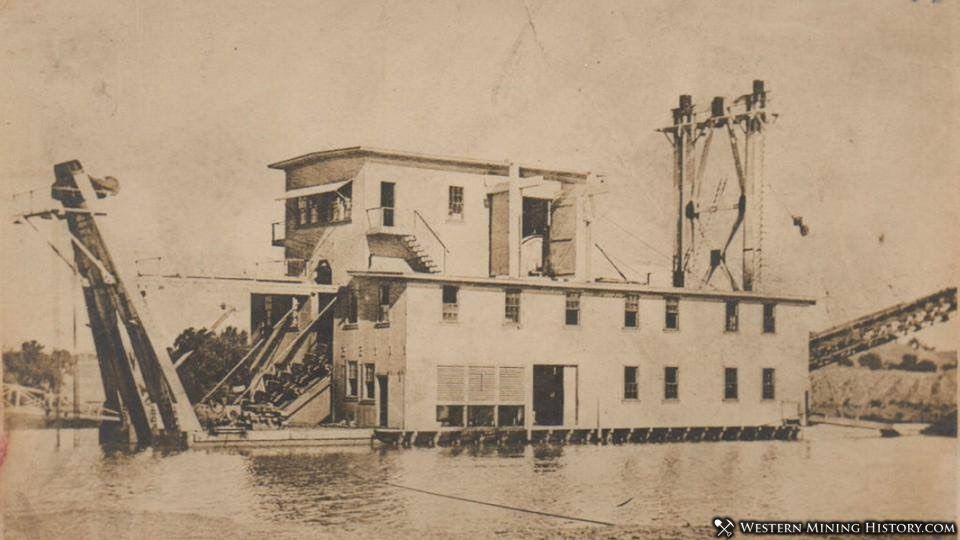 Today La Grange is a town of a few hundred people, with a small collection of historic buildings from the mid-1800s.

The 1921 publication History of Stanislaus County details some of the town's early history (the rest of the text on this page is quoted from the book):

Nestling in the foothills of the Sierras lies the town of La Grange, from whence flow the waters that fertilized the vast valley below. The town, at one time the county seat, glories not in its history of the present or the future, but in the history of the past. Then it was a busy, lively camp, and from its shelter have gone forth stalwart pioneers who were prominent in the activities of the valley towns. In most cases, now their memory only remains and their sons and their daughters are carrying on the splendid work began by the pioneer fathers and mothers. The memory of the writer's father and mother will ever be his most sacred gift.

The first settler at La Grange was Eli Dye, who in 1852 located a rancho. The place was of no importance until the Americans began flocking into the rich diggings of French Bar in August, 1854. Then things began to boom. “Since that time the town of La Grange has been steadily on the increase, in point of mining importance, and the population within two months has taken a rapid rise. A plot of ground was laid off, substantial houses were erected, numerous mechanics and storekeepers came to the place and last, but not least, a fair sprinkling of the fair sex have arrived."

The correspondent, then giving a description of the new town, said, "It boasts of ten three boarding houses, three butcher shops, four blacksmith shops, two restaurants, a livery stable, a barber shop, a billiard saloon and post office. Two sluicing companies are preparing to bring water onto the lower level for mining purposes and a steam engine has been put into operation calculated to afford water for eight or ten sluices. The extent of the mining region cannot be less than twenty miles square and within those limits there is more gold than can be taken out in twenty years."

The camp bar was worked more and paid better than any other bar in that vicinity. They even found gold under the town, and, said Walter Kerrick, "The town is honeycombed with tunnels made by the miners."

From 1854 to 1858 La Grange enjoyed its greatest prosperity and "loomed up as the biggest town in the county." The population at this time, 1858, was estimated at 1,000 whites and about the same number of Chinese. The population consisted largely of young men, ranging in age from seventeen to forty years, with very few women or children. For transportation there were three lines of stages running daily except Sunday to Stockton, these lines including La Grange, Knights Ferry, Sonora, Columbia, Don Pedro's Bar, Jamestown, Chinese Camp and Fox's ranch.

Without plenty of water the miners could not have obtained the gold. In the earliest days the families obtained the water for drinking and household use from springs under the bluff near the river and they afforded an inexhaustible supply. Then M. A. Wheaton constructed a dam across the river about a mile above the town, and the water was used for irrigation. This proved a great convenience and benefit to the owners of orchards, gardens and vineyards in that neighborhood.

Water was all important to the miners and in 1856, under the leadership of Mr. Pine, a company was formed for the purpose of supplying the miners with water. About two miles above the town they constructed a rough dam of logs solidly bolted together and firmly fixed to the sides and bottom of the canyon. It was twenty-three feet in height and the water was conducted to the miners in long flumes or troughs.

For hydraulic mining, that is, using the water through hose under a heavy pressure, the water was brought from a dam constructed at Indian Bar, sixteen miles above La Grange. After La Grange lost the county seat the town rapidly lost its business and population, and in order to encourage the people and give the town new life, says Branch, a company was organized in 1871 to bring the water from the Tuolumne River on to the auriferous mines back of the town.

It was a big enterprise for that day and the company represented some $5,000,000 and was known as the La Grange Ditch and Hydraulic Mining Company. They purchased nearly all of the claims owned by the miners and a large number of town lots. These lots were dug out, looking for gold, and a great portion of the town nearest the river was washed out by hydraulic mining. In 1889 the Wheaton Dam was blasted out, survey made and a large dam constructed. It was the beginning of the present Modesto and Turlock District irrigation system.

There are times when a town does not realize its power and strength until it awakes from its lethargy and starts to do something. When Empire City obtained the county seat by a very small vote, La Grange evidently was asleep regarding the benefits to be derived from that honor. The population in that vicinity was the largest in the entire county and the principal activities of the county centered around the camp.

La Grange found out a few months after the election that the county seat was a good thing for the town. Again they went through the performance of getting signers for the removal of the official town to La Grange. The required number were easily obtained. The petition was presented to Judge Wallis, and he called an election on December 20, 1855. There were but two aspirants for honors, Empire City and La Grange.

As a result the little valley town was swamped as by a tidal wave, receiving only 139 votes and La Grange 585. It was the mountains against the valley and a nice little Christmas gift for La Grange. A few weeks passed. Then by order of the court the county officials packed the county records and their household goods in wagons, "Then away to the mountains, where careless and free, they could dance on the meadow and skip o'er the lea."

La Grange then had no fear of a rival in Knights Ferry, the little mining town to the north, because it was in an adjoining county, San Joaquin. It was both a mining and an agricultural town. It contained many men of wealth and enterprise, considerable of a population and had considerable taxable property. The citizens were not particularly interested in county seats until 1861.

At that time Knights Ferry had been removed into Stanislaus County and they began seeking official recognition. The election for county seat took place at the time of the presidential election, in November, 1860. La Grange made a hard fight for the honors but Knights Ferry out voted them, 422 to 383. The county seat remained at Knights Ferry until 1871,. when it was again moved back to the valley, with Modesto as its home.