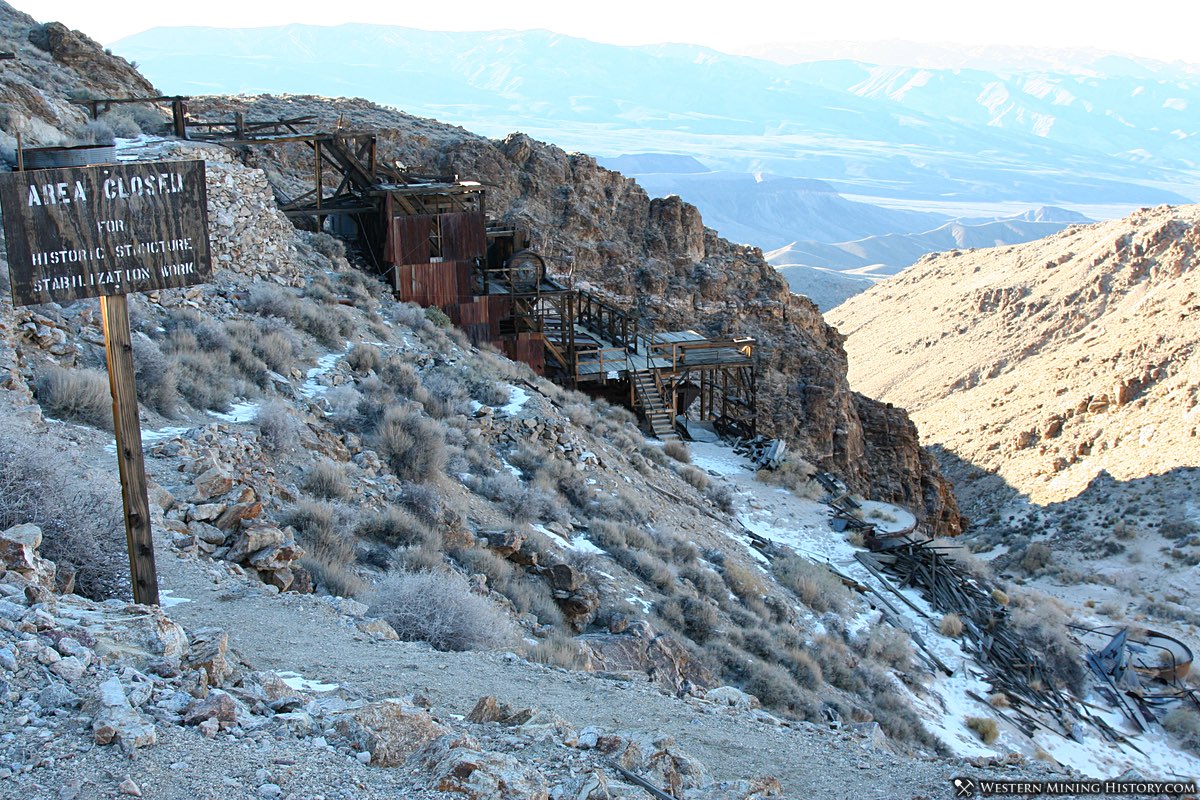 Unlike other Death Valley boomtowns, Skidoo flourished for nearly ten years. At its height in 1907 it boasted 700 residents, a newspaper, bank. school, and telephone service. The hundreds of mines here earned about $1,600,000 (when gold was sold at $20 per ounce), making Skidoo one of the most productive gold camps in California. 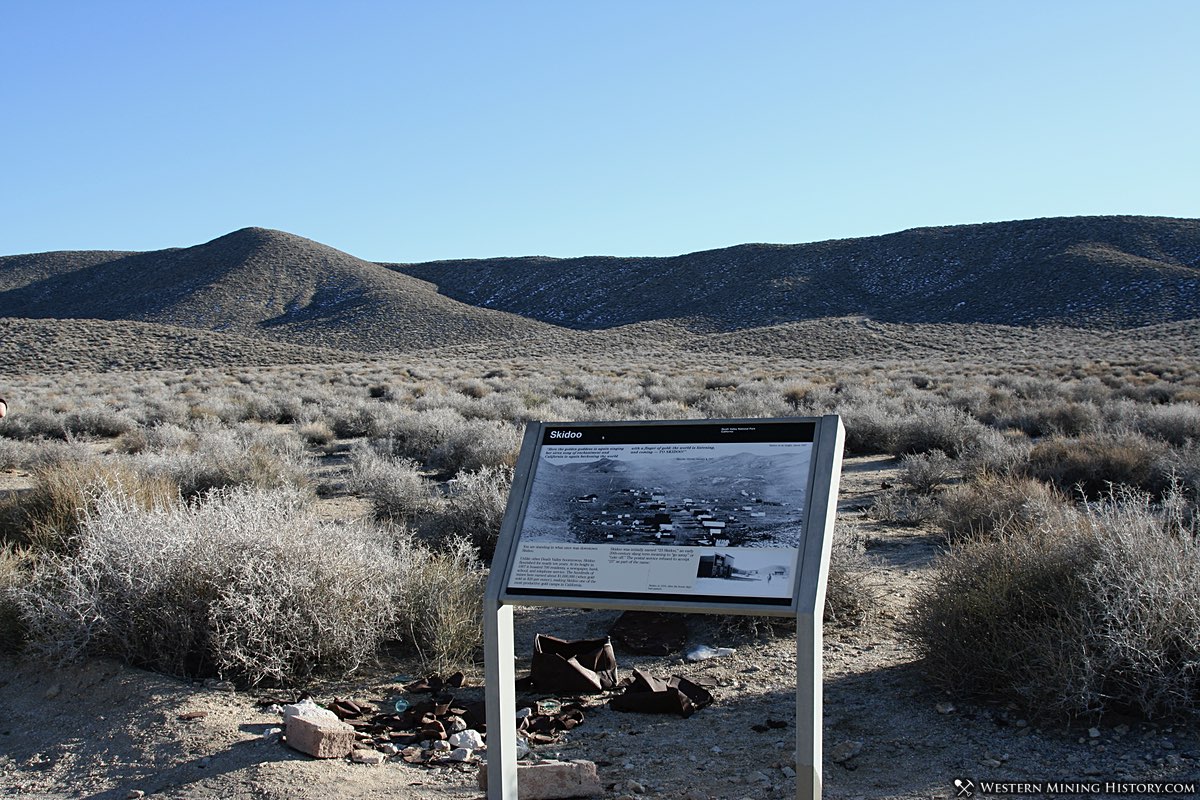 Skidoo was initially named "23 Skidoo", an early 20th-century slang term meaning to "go away" or "take off". The postal service refused to accept "23" as part of the name. - Text from a sign at the town site. 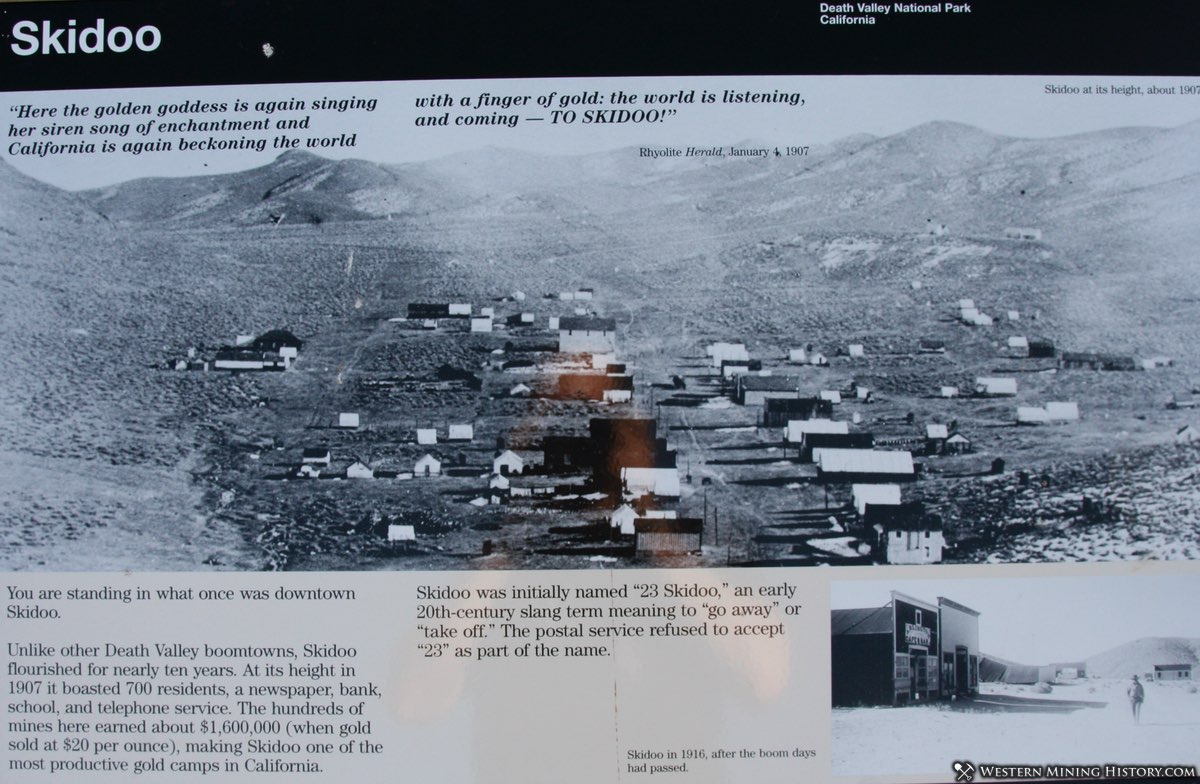 "Right here on the border line between California and Nevada, just a few miles from arid within speaking distance of Nevada's big, bonanza gold camps of Goldfield, Rhyolite, Tonopah, California promises to give birth to the most wonderful gold mines America has yet produced . . . . Here the golden goddess is again singing her siren song of enchantment and California is again beckoning to the world with a finger of gold: and the world is listening, and looking, and coming--TO SKIDOO!" - Rhyolite Herald, 4 January 1907. 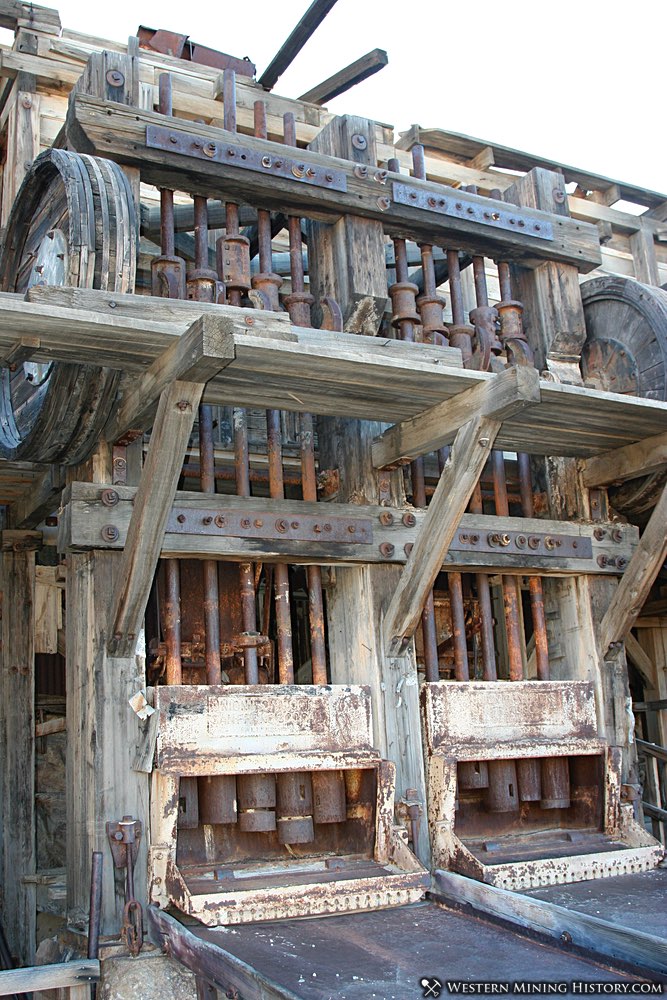 Stamps at the Skidoo Mill 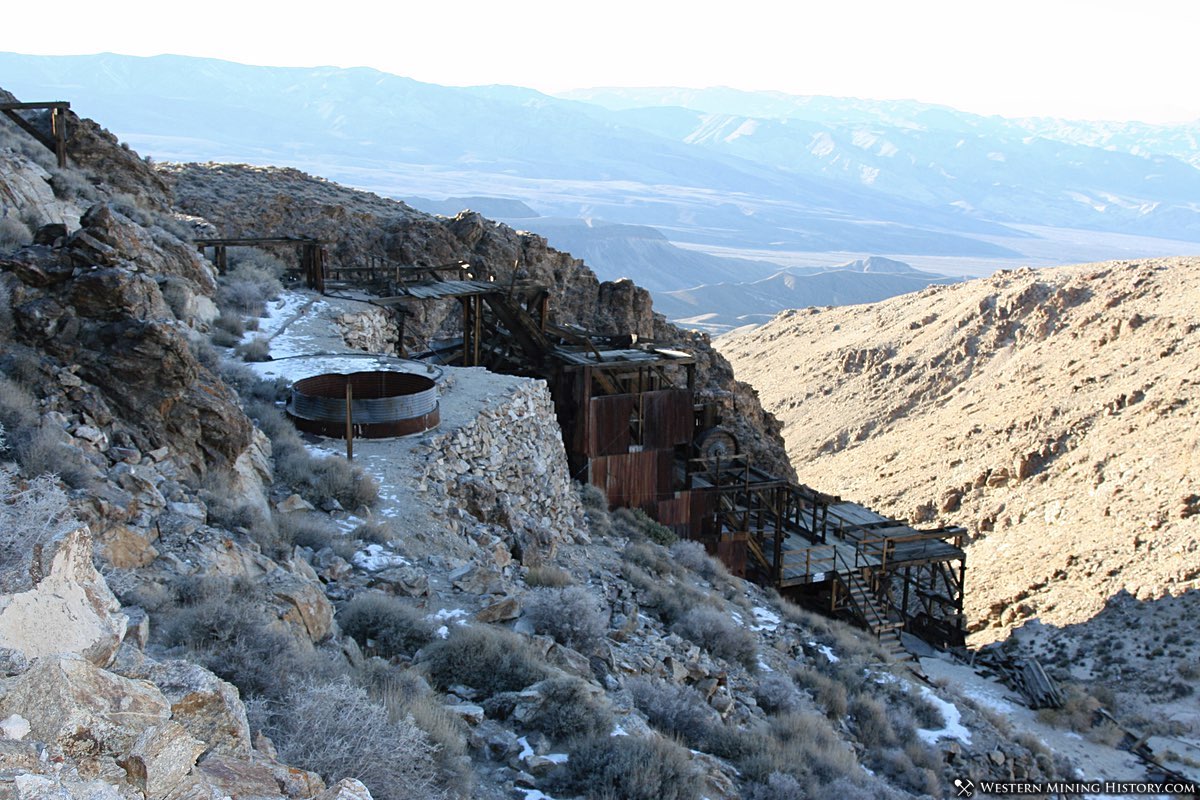 The pipeline was built by Skidoo mines owner Bob Montgomery and was said to stimulate prospecting throughout the area as it provided water to prospectors and allowed them to explore the most isolated sections of the desert country. Montgomery, described as "a desert rat himself" established a number of watering stations along the twenty mile pipeline to provide water for anyone that needs it. 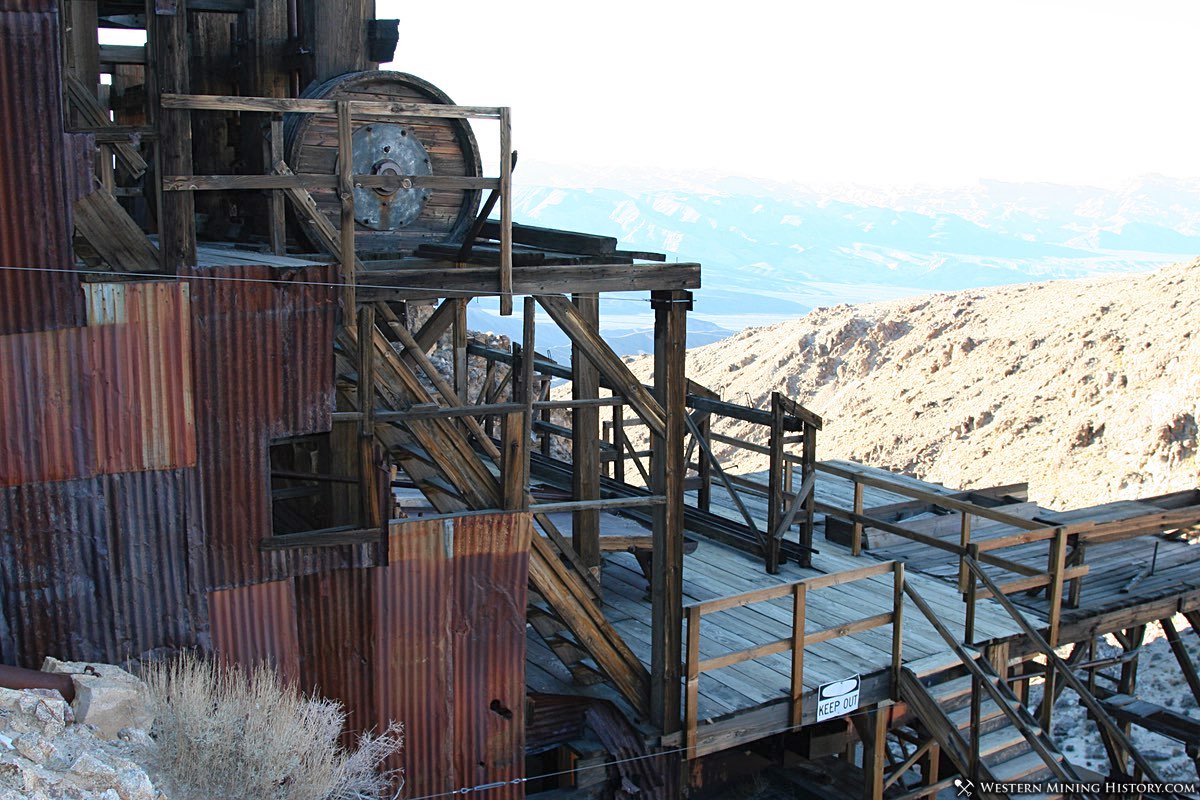 A September 1908 edition of the Los Angeles Herald reports that gold bricks valued at $10,000 from the Skidoo mines have arrived in Rhyolite and are on their way to the mint. The bullion represents a run of fifteen days and is average for the last three months. As of 1908, the ore is said to have been "increasing in both quantity and quality." 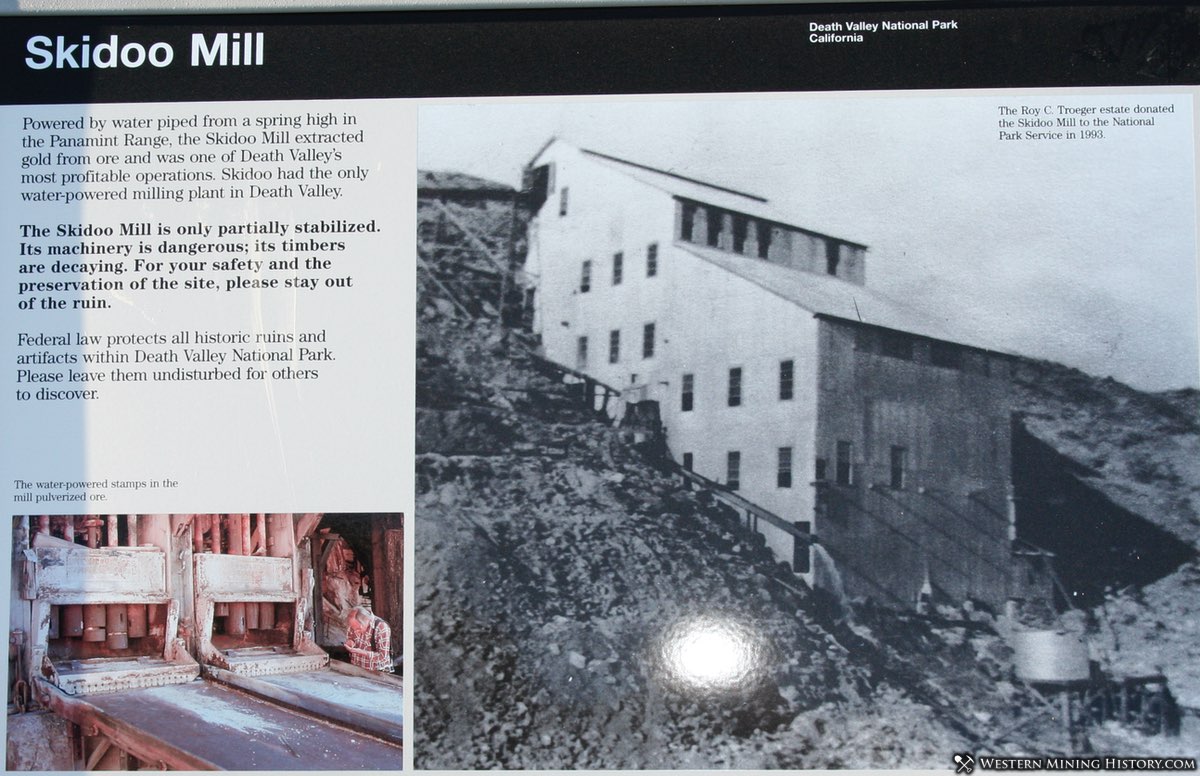 The Sacramento Union reported in July 1907 that the Southern California bank of Skidoo is "in financial straights.... and now in the hands of creditors." The bank was located in a grocery store, and "the meager limits of its quarters was indicated by the fact that but two men could get behind the counter at one time." 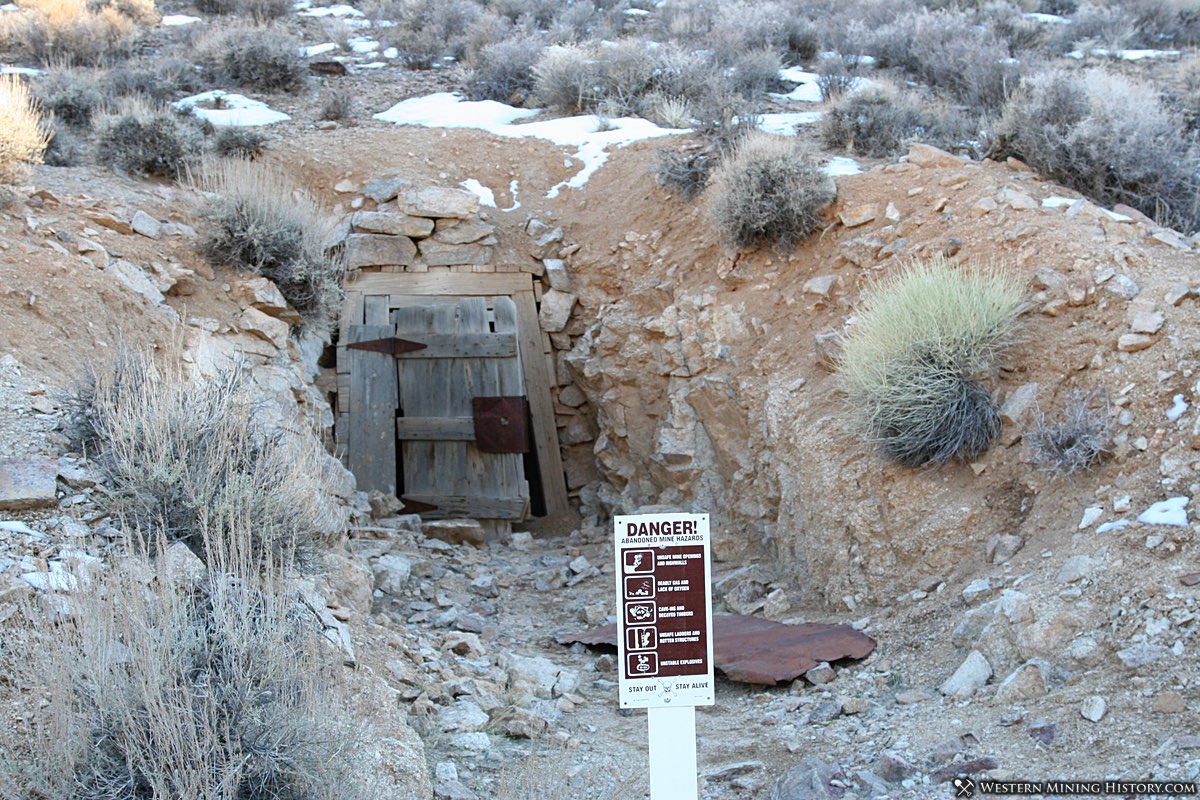 The bank apparently survived its financial crisis as the San Francisco Call reports that in April of 1908, Joe Simpson, a gambler with an unsavory reputation, made an attempt on the life of Cashier Dobbs of the Southern California bank. Simpson then shot and killed James Arnold, a popular local butcher. 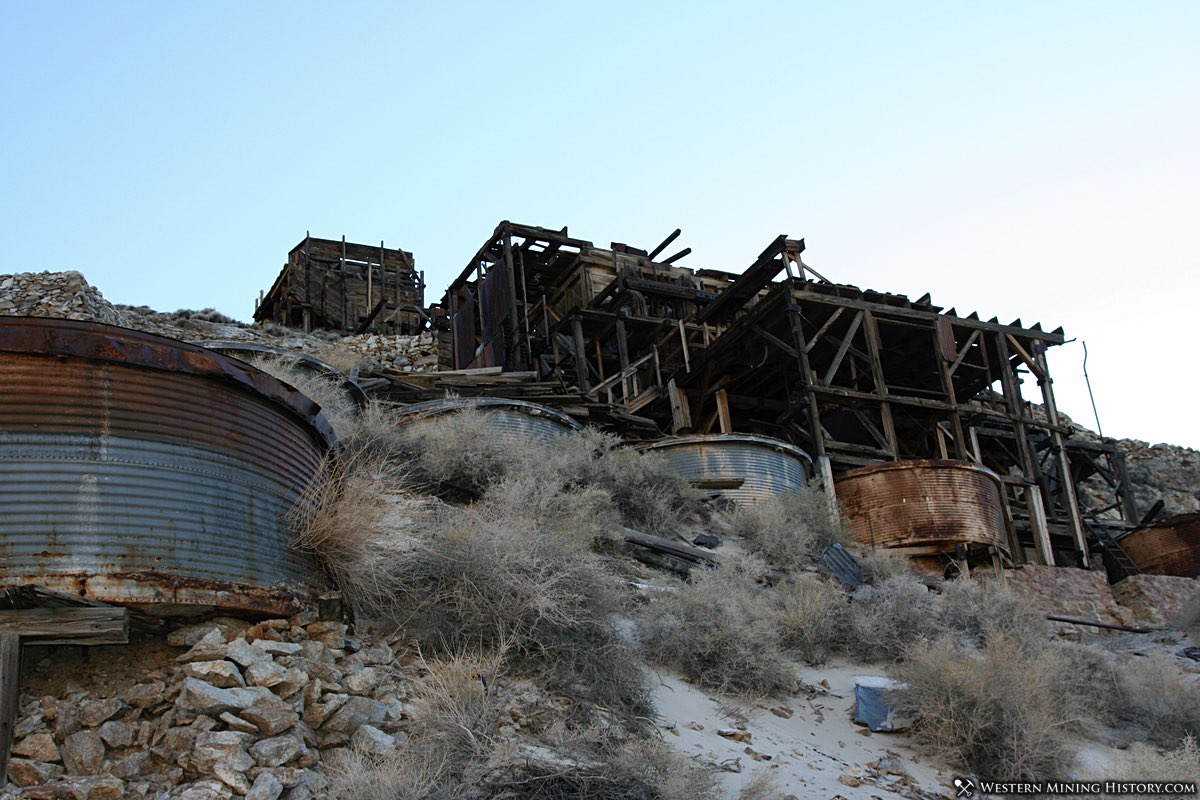 Skidoo had no jail, so Simpson was being held under guard in a "cast iron building". An armed mob arrived at about 11 o'clock and demanded that Simpson be turned over to them. The prisoner was turned over without a struggle and was hung by the neck from a nearby telephone pole. A passerby discovered his body the next morning.

Skidoo is located in a remote part of Death Valley National Park. Nothing is left of the town but the Skidoo mill is intact and worth a visit. The views from the mill are spectacular. 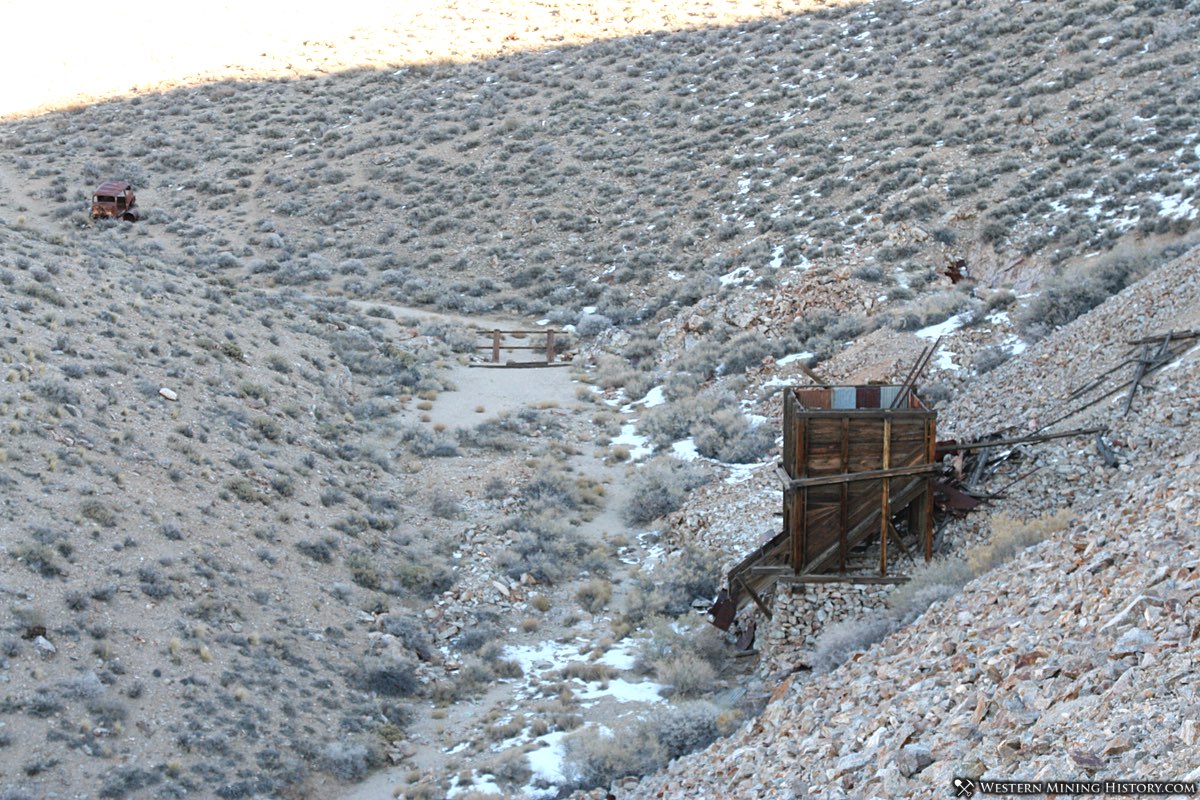 Ore Bin at the Skidoo Mill

Where to Find Gold in California
A Look at California in 1851, Two Years Into the Gold Rush
Inyo County California Gold Production
The Amalgamator - Skidoo 1909